Hyderabad Techie Scammed Of ₹50,000 For One Plate Of Biryani 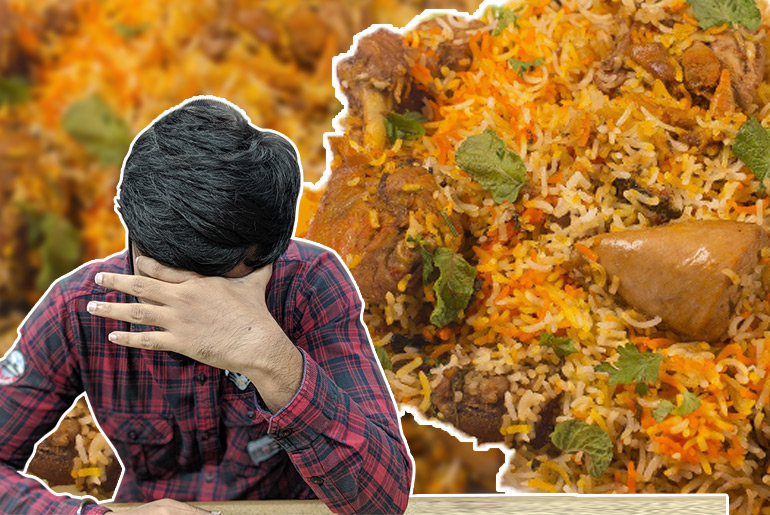 We all have bad days. But some people end up having worse. Ask the Hyderabad techie who not only didn’t get the biriyani he ordered for but also ended up getting scammed of ₹50,000. A software professional residing in Rahmat Nagar in Jubilee Hills ordered a special chicken biriyani for ₹200 on food delivery app, Zomato. But unfortunately, his order got misplaced and he received Sambhar-Rice instead. He was extremely angry with the service and searched for the customer care number for Zomato online. He found a number through google search and called it, and got scammed of ₹50,000. In reality, Zomato doesn’t have a customer care number. When the Hyderabad techie called the fraud customer care number for misplacing his order, the caller on the other end of the line, was polite and regretted their bad service. The caller also convinced the techie that they would refund the money immediately through Paytm. They sent the victim a QR code to be scanned to he could avail his refund. And once he scanned the given QR code, he realised that instead of getting a refund, a whopping ₹50,000 was debited from his account. He visited the police station and informed Hyderabad cyber crimes Assistant Commissioner of Police (ACP) KVM Prasad.

The ACP stated that the victim got tricked by a phishing page, which listed his contact under the disguise of a Zomato customer care. The police have registered this biryani scam case under section 420 of IPC and 66 D of the IT Act, for punishment for cheating by impersonation using a computer resource. ACP KVM Prasad revealed that the investigation was going on. He also stated that while fraudsters call people pretending to be customer care executives, this new modus operandi of online frauds taking place has been going on since months. A Bengaluru techie was scammed of ₹95,000 when he ordered a pizza online. Police revealed that the QR code scams have been going on since months and is on the rise in the city. Police have cautioned citizens to not scan QR codes when instructed by ‘customer care’ online. Meanwhile, Zomato had said earlier, “We constantly remind our users via different channels of communication that we do not have a customer care number. Chat and email are our primary channels of care. While we take every effort to ensure customer safety and security, we also urge our esteemed customers to be vigilant and not share their personal or bank account details with anyone.”So, don’t search for ‘Zomato customer care’. They don’t have one. Well, this biriyani surely proved to be a very expensive one for the techie. But we do hope that he gets his money back and a good dose of biriyani to extinguish his sorrows. An if you’re a biryani lover then here are 13 Best Biryani Places In Pune For 2020