I Stayed At This Homestay In Lachung Perched At 12,000 Ft That Isn’t Traceable On The Internet Perched high above the rugged terrains of North Sikkim, close to the Tibetian border, lies the magical hamlet of Lachung. Looking up from here, the tip of the snow-capped mountains seems to be only a day’s walk away. Needless to mention, the temperature remains remarkably low here, with chilled winds blowing all around the year. During the coldest months, the mercury can even drop to -3°C to -5°C. On top of these, the village will push you into a digital detox, with hardly any network connection available. My visit to Lachung happened out of sheer luck, due to a last-minute plan change. And I ended up in a resort that I couldn’t even find on the internet later. Here’s how my journey started. The Saviour At The Last Moment!

We had actually planned to visit Darjeeling, and we started looking for hotels around three weeks before Christmas. But sadly, all the mountain facing rooms in the convenient locations were sold out. I could find a resort in a very remote location of Darjeeling, far from the main town. They offered us a mountain facing room on request ( they said they had the last room left), that too at a price higher than the usual. Left with no other option, we finalised the room. But we had chosen ‘Pay at the Hotel’ option as I was still secretly hoping for a more satisfactory property in a good location. 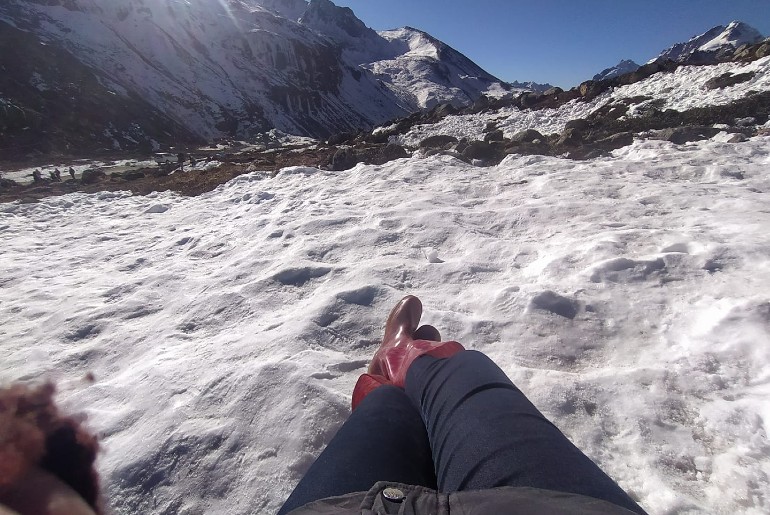 On the evening of December 22, 2020, we set off from Kolkata for Siliguri in a Volvo Bus at around 7:30 PM. Our bus reached Siliguri Junction at 8:30 in the morning. The Darjeeling hotel guys had told us to take a shared cab up to a particular location. They had said that they would take us to the hotel from that point at ₹1000. Asking the locals, we came to know that location of the hotel was too isolated and sightseeing from there would be highly time-consuming and costly. To add to the woes, the shared cab owners said that they were not taking the route through the specified point. Feeling almost clueless, we headed to the office of the travel agency, River Mountain Tourism, which turned out to be our saviour.

The tour planner, Mr. Amarjeet ( Phn: 9932625754), at the office offered us the Yumthang-Lachung-Zero Point Package at ₹6900 per person, which included hotel stay in Gangtok and Lachung, breakfast for three days, lunch for two days, sightseeing and pick up and drop off costs. Also, we were getting luxurious, mountain facing rooms. Without giving a second thought, we grabbed the deal.

A Day’s Halt At Gangtok

We had to halt for a day at Gangtok before heading to Lachung. Lachung is roughly five hours from Gangtok via road. The road from Gangtok to Lachung is flanked by numerous gushing waterfalls, sky-kissing mountains and the gorgeous turquoise-hued Teesta river. At Gangtok, we had put up at Hotel Bella Casa. It offered us spacious, clean Kanchenjunga facing rooms with all the modern amenities. The hotel guys had also sanitised our bags using rays. Also, we enjoyed gourmand food at the hotel, that too in good quantities. 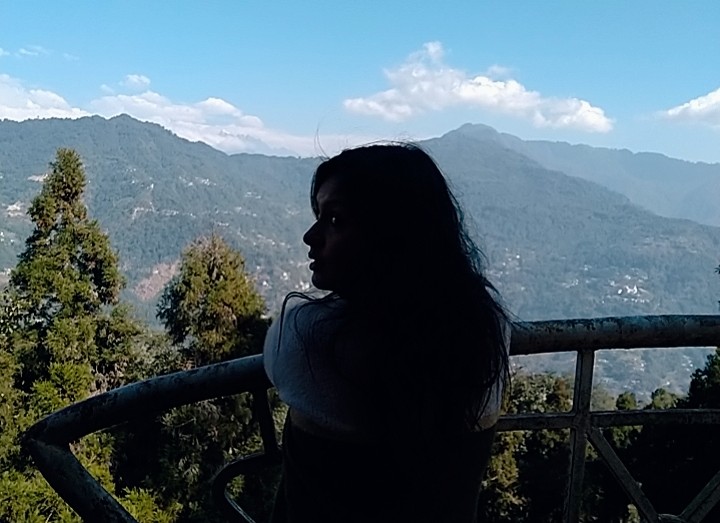 Blue Pine Resort In The Heart Of The Lachung Mountains

We were told that at Lachung, we won’t have facilities as luxurious as Gangtok. I had felt a little heartbroken until I actually reached the Lachung Resort. It was a countryside cottage cutting through the mountains, at around 12,000 feet above sea level. The moment I landed at the resort, I felt like stepping into heaven. At the huge gate, it was written ‘Blue Pine Resort’. When we reached there, the nightfall had taken over, and the silhouetted avatar of the mountains looked like the slice of a fairytale dream. A rolling path downwards, followed by a flight of stairs, led us to our room. The room was simple, but was highly clean, with all the necessary requirements like large beds, a clean washroom and a geyser. Ask about the best part, through the windows, we could witness the misty, snow-covered peaks up and close. The property was locked by mountains on all sides. We weren’t able to step out of the rooms, as our hands were freezing. Quickly freshening up, we ordered piping hot coffees and cups of Maggi. On our way to Lachung, we had picked up some Sikkimese wines and brandies. We kept sipping on them to keep ourselves warm. Around 9 PM, we were called for dinner. Also Read: Darjeeling’s Tea Estate Now Boasts Of A Taj Hotel With The Most Panoramic Views

A Home-Style Buffet In A Traditional Dining Space

The dinner included highly delicious and comforting home-cooked rice, dal, sabzi and chicken. And the food was served on a buffet basis in a traditionally-styled common area. After dinner, we had a conversion with the guy at the cottage, Abhilash ( Phn: 7428523896), who told us about the place. 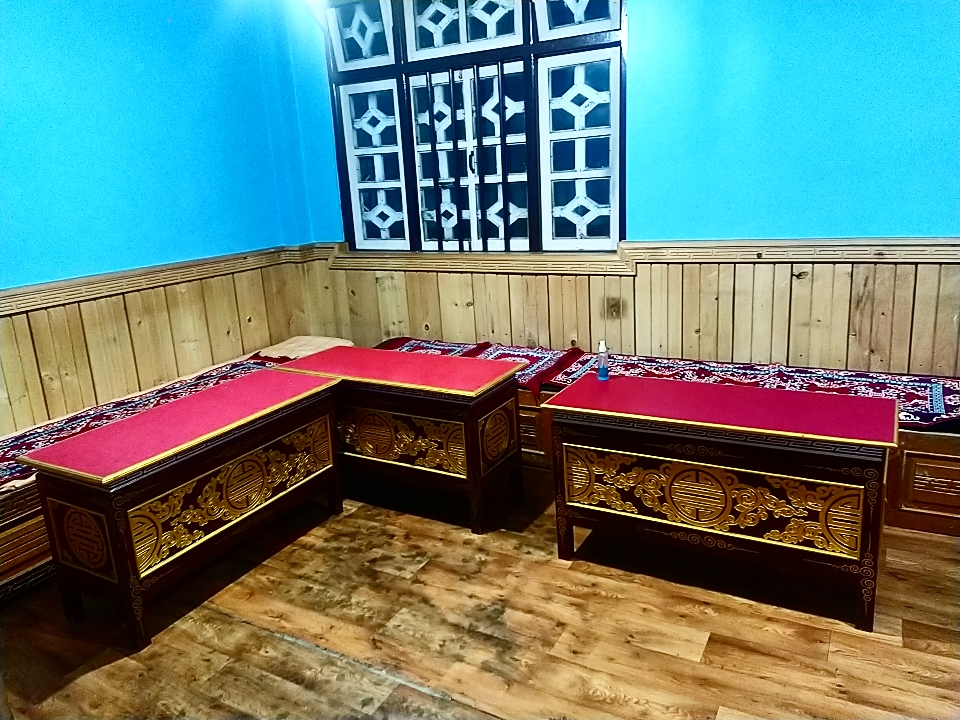 He said that we had visited Lachung way earlier than the season and added that the hamlet gets totally blanketed in snow during Feb end to March. This year, due to lockdown, the pollution levels had dipped which paved the way for an early snowfall in North Sikkim’s Zero Point. The very season we opted for the Lachung trip. 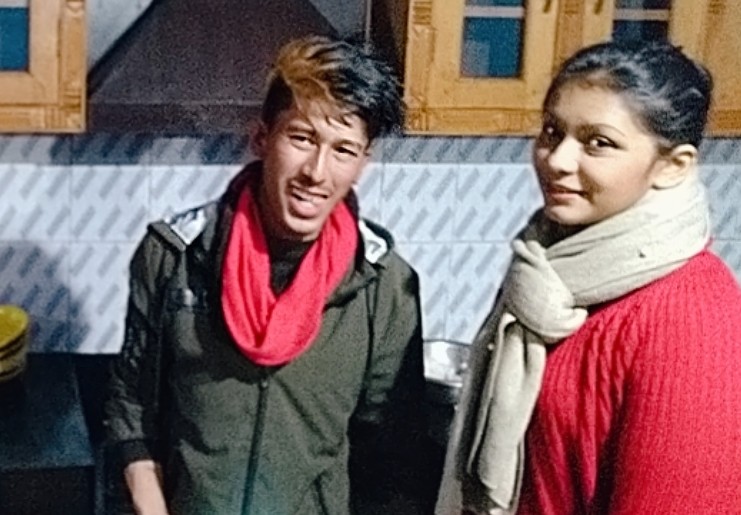 Despite visiting earlier than the peak season, the hidden resort did not disappoint us. We were lucky not to get a room at Darjeeling. As this is one secluded resort that couldn’t be spotted on the internet. When you search for it, another resort with the same name in Lachen might pop up, but you’ll hardly find any trace of this. The next morning we had to leave at sharp 6 AM. Waking up in the biting cold at early mornings isn’t quite an easy affair for city people like us. Thus, checking out of the resort at that wee hour seemed really challenging. But my desire to see the daybreak on the mountains was stronger. I hardly slept that night. At 3:30, I slipped out of the bed and started packing my belongings. We had to leave the cottage the next morning itself. By 5 AM, I was all ready. I kept staring at the mountains, waiting for the sunlight to sneak out. But the darkness kept persisting even at 5:30, when Abhilash called us up for morning tea in the dining room. By the time we finished our tea, the sun too had made its presence.

Experiencing The Chill At -3 °C; Golden Hues Of The Sun Wrapped Up The Snowline

The mesmerising view of the golden hues wrapping the snowline had put me under a spell. I started clicking pictures of the striking vistas around. The huts around were painted splendidly in bright pastel shades and they looked soothing to the eyes with the hills in the backdrop. But I couldn’t stand at one place for long. The oxygen level, along with the temperature, was drastically low. I was wearing thermals, a top, a sweater and a jacket. Even after so much of shielding, I couldn’t help myself from feeling cold. I asked Abhilash about the temperature. He said it was around -2 to -3 degree celsius.

Our driver reached the resort at 6 AM sharp and asked us to leave our luggage at the resort, adding that we would come back there again for lunch, before heading back to Gangtok. We started at around 6:30 AM from the resort for visiting Yumthang Valley and Zero Point. A few metres before the Yumthang Valley, we got down at a local street-side stall where we were offered bread with jam for free. For some extra bucks, we ordered momos and tea. The stall was a pretty one, with dark, misty interiors and the two kettles were put over the blazing woods. We brought our warm hands closer to the fire and the sensation was soothing. 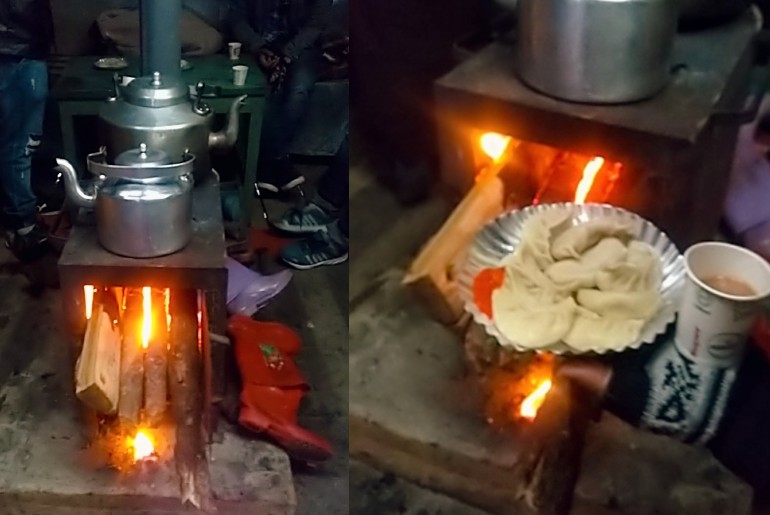 From the stall, we hired army jackets and boots for visiting the incredibly cold Zero Point. Since it was December, the Yumthang Valley did not have any flowers. Our driver said that during the spring months, pretty flowers of varied colours, like rhododendrons, poppies and iris take over the entire valley. No wonder, it is known as the Sikkim Valley of Flowers sanctuary.

The Zero Point: Iceland Is In India Too…

The narrow roads from the Yumthang Valley went up in a zig-zag pattern. I had heard earlier that Iceland can be found in India too. On our way to Zero Point, I saw it with my own eyes. We crossed snow-covered paths and pebbles, frozen streams and even stalactites and stalagmites. The tip of the mountain was dazzling flamboyantly under the soft sunlight. I had no network and no internet on my phone, and I realised that beyond these necessities, there is a beautiful life in the lap of nature. Only one of my friend’s phone, which had an Airtel connection, was working. 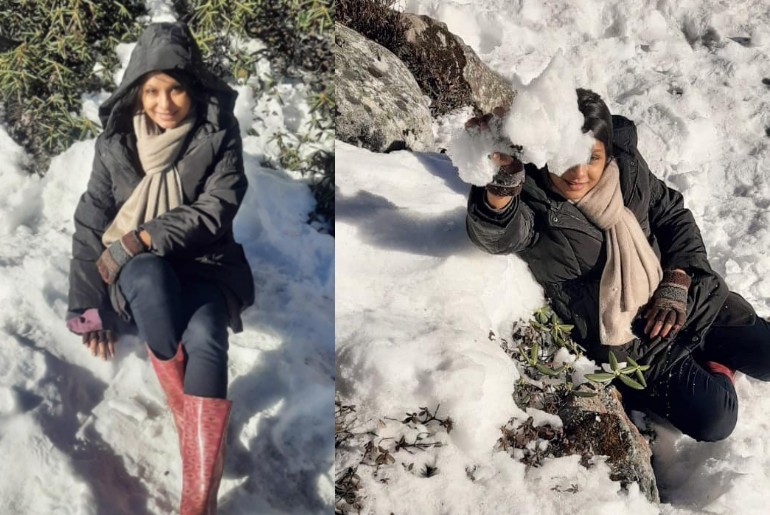 The moment we reached Zero Point, I was so overwhelmed with happiness that I didn’t know whether to smile or shed a tear. The farther I looked, there was snow, snow and only snow. It was December 25 and I was literally spending a ‘White Christmas’. The snowy paths were quite slippery. But the army boots aided in successfully cutting through them and trekking up to the higher stretches. Reaching atop, I finally rested down on a stone with a huge sigh of relief. From running over the soft snow, playing with snowballs and smashing them, my Christmas was happily sorted. 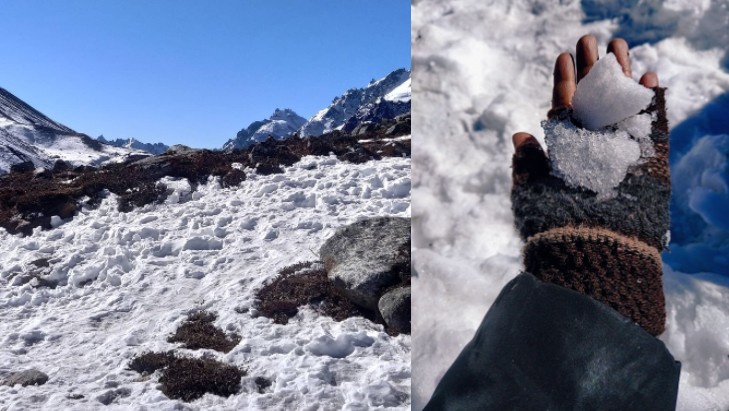 At Zero Point, locals have set up stalls where Maggi, beer, eggs, choley and a special beverage, coffee with brandy is sold. Speaking about the taste of this combination, there have been mixed reactions. Only those who have got a love for the strongest of boozes might fall for it. Honestly, the drink was too sharp on my tongue. Nevertheless, it had made my body warm in that stone-cold weather.

We returned to our resort at around 1:15 at noon. The temperature had become normal then. There we had lunch on home-cooked food. After lunch, I strolled through the paths near the resort capturing snaps of the village nearby. Soon after, at around 3, when the entire group was ready, the car started for Gangtok, leaving behind the dreamy resort. The charm of Blue Pine and Lachung as a whole got etched in my heart forever. On the way of return, while passing by the waterfalls like Bhim Nala and Naga, I whispered in my mind, “I will come back here all over again.” 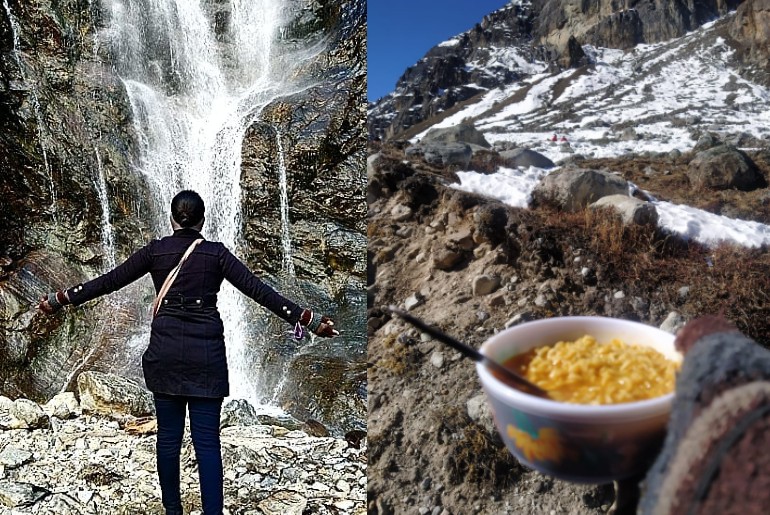