The coronavirus lockdown has pushed all of us inside the four walls of our homes. And after being cooped up indoors for more than five months, the monotony was clearly getting on my nerves. I needed a break, badly. Stepping out isn’t a safe option now. However, I had read that according to CDC recommendations, driving and walking are the safest modes of travel now. It was a Sunday morning and I woke up to the drizzles of the monsoon with the chilled weather taking over the surroundings. I was excited, and at the same time, utterly clueless about what to do. Then the idea of a drive through the empty roads of Delhi clicked on my mind. So I called up my friend and we decided to head over to Humayan’s Tomb. We had taken all the precautions, from wearing masks and using sanitizers to having a heavy breakfast for better immunity. 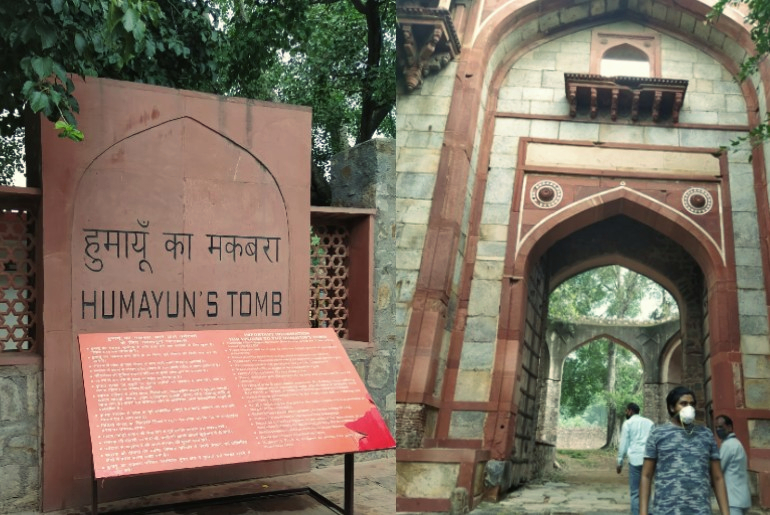 A Socially-Distanced Trip To Humayun’s Tomb

I was happy to travel after months, yet subconsciously, was scared too. Are the social distancing measures being followed there? Will there be too many people? Will the queues at the entry points be too long? Questions like these kept coming on my mind.  But once I reached there, I was bowled over by the precautionary measures the authorities had taken. Luckily, when I visited, the other tourists too were responsible. I smiled, as my doubts were erased.

Multiple Points For Digital Ticket Booking, Name Of Each Visitor Entered In A Register

Outside the entry gate of the monument, we found multiple boards with QR codes on them for digital payments. This facility has reduced the chances of queueing to a great extent. Also, after entry, the security personnel were registering the name of each visitor, along with the entry date and time. 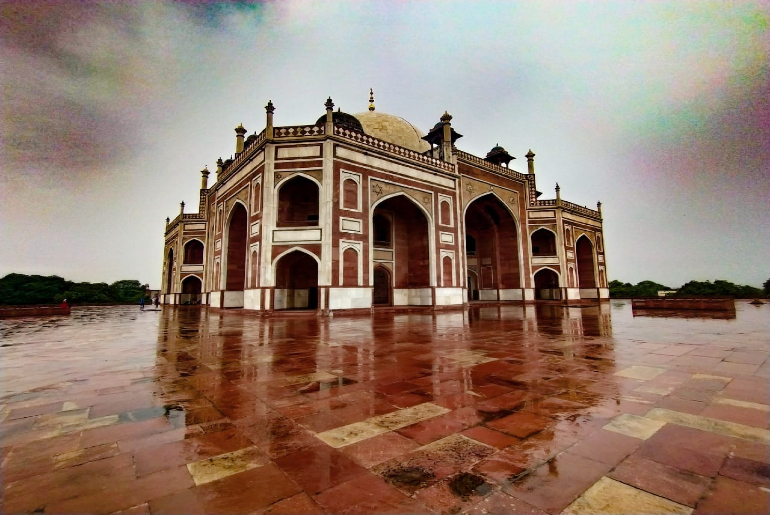 In the first week of July, the Union Ministry had allowed the reopening of monuments in the country outside the containment zones. Adhering to the guidelines of the Centre, Purana Qila and Humayun’s Tomb had been permitting only 2000 visitors per day, with 1000 people in each slot. 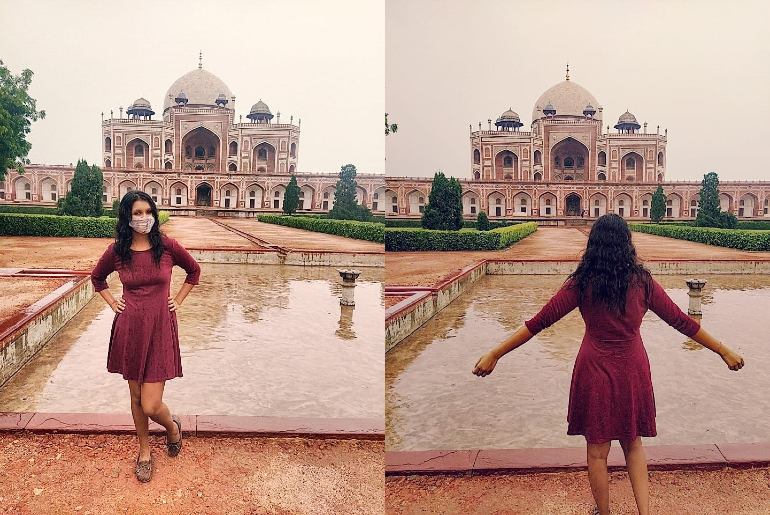 Humayun’s tomb or Maqbara-i Humayun in Delhi is one of the most breathtaking architectures that was built on the orders of Humayun’s first wife, Empress Bega Begum. The construction of the monument had started in 1565 and was completed in 1572.  And the construction cost was a whopping ₹1.5 million. The monument sits on a sprawling 30-acre Persian-style garden. The area is huge and there were only a handful of tourists. So, we could easily maintain safe distances from others. 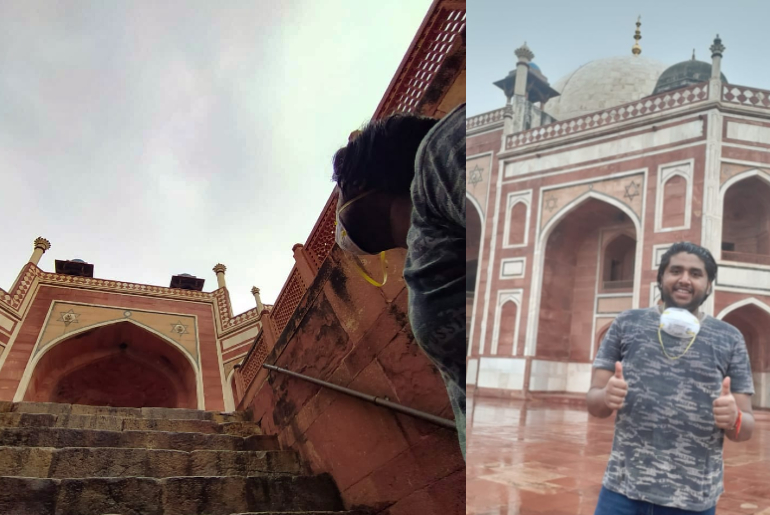 Sanitizer Was Provided During Entry And Exit

We are provided sanitizer while entering the monument premises as well as during exit. Prior to the pandemic, the tomb used to attract tourists from all over the world. It is one of those iconic monuments in Delhi where a large number of foreigners can be spotted in normal times, along with the local tourists. But now, the scenario is different. Nevertheless, the absence of the thick crowds had made the experience even more serene. 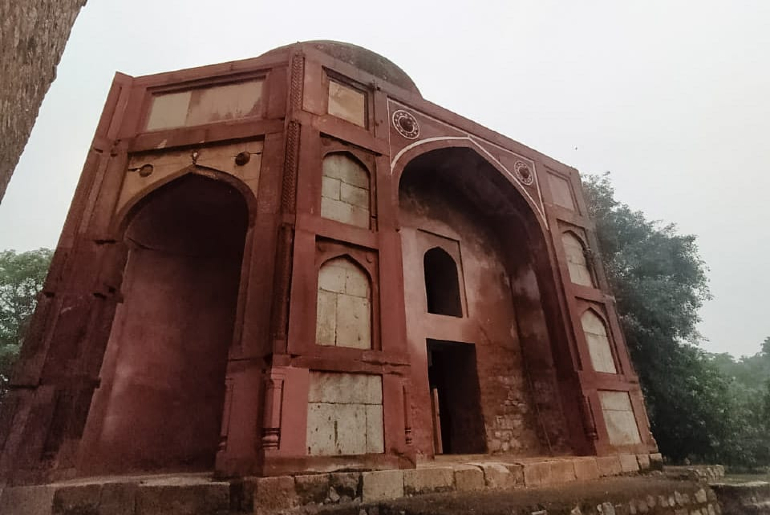 It Was A Rainy Afternoon, Peacocks Were Freely Roaming Around

At one point, the rains had got heavier and we were left with no choice other than standing under a shade and waiting for the downpour to cease. The lush green garden was right in front of us, and we saw many peacocks playing around. They were dancing gracefully, undisturbed by the humans. The sound of rain, the smell of the mud, the sight of the Mughal-era structures, the screeching of the peacocks- with everything at one place, I swear I was living a fairytale dream. 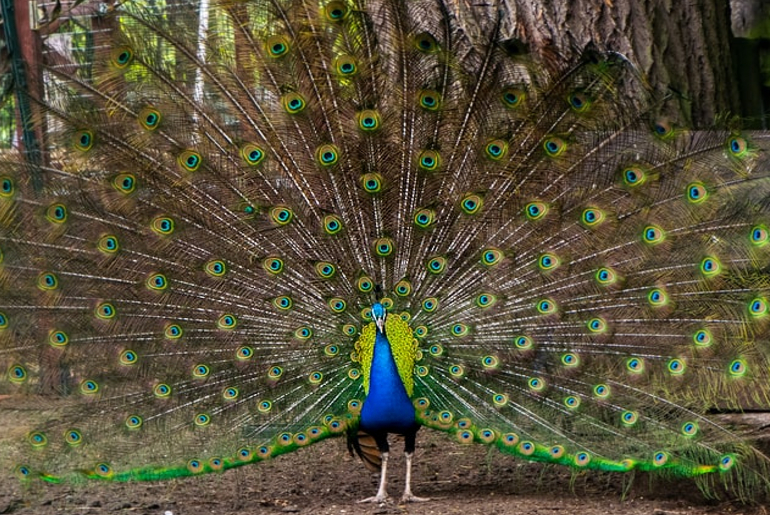 Also Read: The 100-Yr-Old Sunder Nursery In Delhi Got A Makeover And Now Looks Like A Dream

After spending about two hours at the tomb, we drove to Essex Farms, a courtyard with multiple cafes, roughly 20 minutes away from Humayun’s Tomb. Since both of us were craving something Italian, we entered Rustique, a cutesy cafe inside Essex Farms specializing in coffee, tea, baked delicacies, pizzas and pasta. We had ordered Earl Grey and Darjeeling teas, along with Penne Pasta and Masala Fries. The best part was, the waiter presented a QR code which we had to scan for the menu. He confirmed that this special arrangement has been made to avoid contact as much as possible. 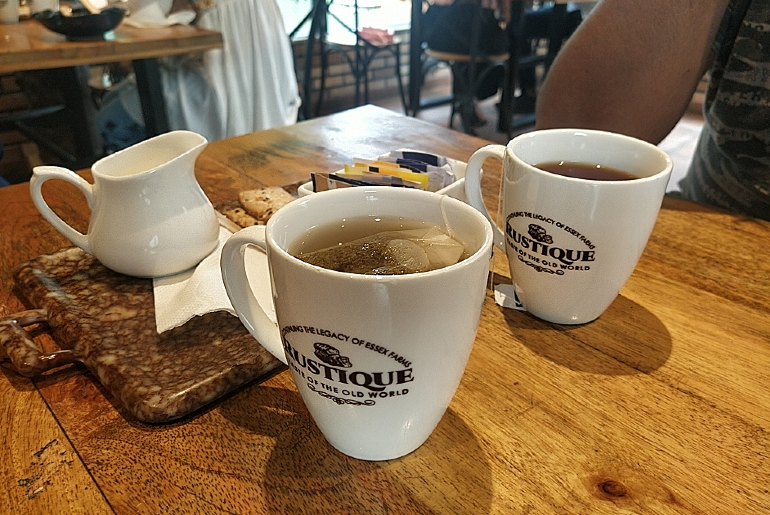 Doors And Windows Of The Cafe Renovated With Social Distancing Messages

The glass windows and doors of the cafe are now having eye-catching safety messages like ‘Practise Social Distancing’, ‘Face Mask Always’ and ‘Use Mobile Pay’. We also had to undergo a thermal check-up upon entry and sanitize our hands. 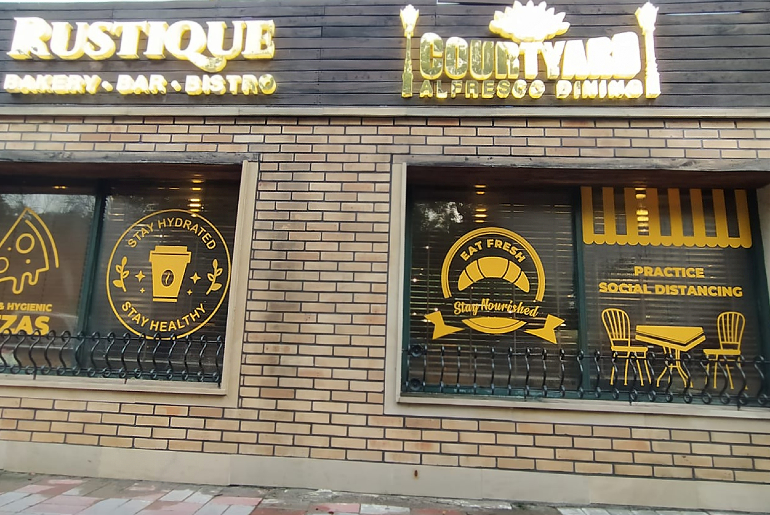 Rustique has an enclosed space as well as an open-air area. The open-air zone looked adorable, thanks to the huge orange teddy bears that had taken up the seats which the customers weren’t permitted to occupy. Healthy Little Secrets cafe, Dubai had also taken up a similar initiative’ to ensure social distancing. 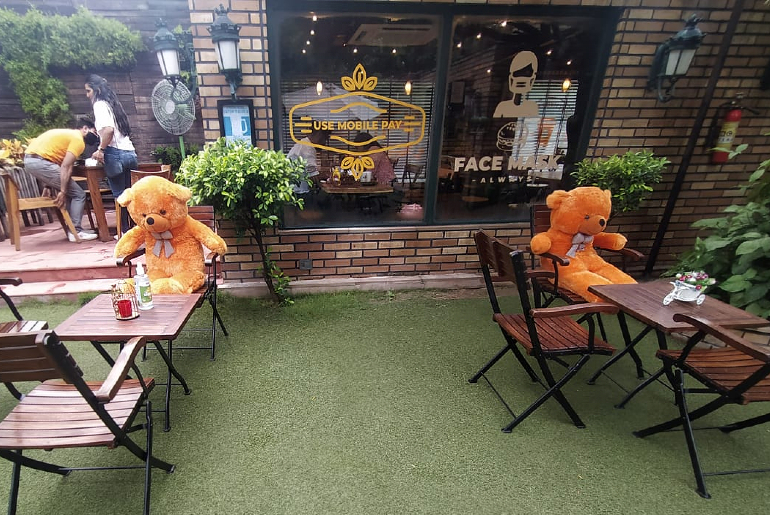 Also Read: Delhi’s Cafe Tesu Is A Haven For Coffee Lovers It Serves You A Whiskey Based Coffee

When I had started the journey, I had no idea that the trip would turn out to be so memorable. The day was a bit hectic but mentally rejuvenating. It helped me in getting rid of the woes of the daily routine of ‘work, sleep, eat, repeat’. Having said that, we made sure to follow the protocols of safety every single minute. If you too had an experience of socially-distanced travel, tell us in the comments section below. Meanwhile, here is a mind-boggling virtual tour of the famous monuments of Delhi:

5 Affordable Stays In Panchgani That Will Give...

This Is The World’s First Airline To Use...