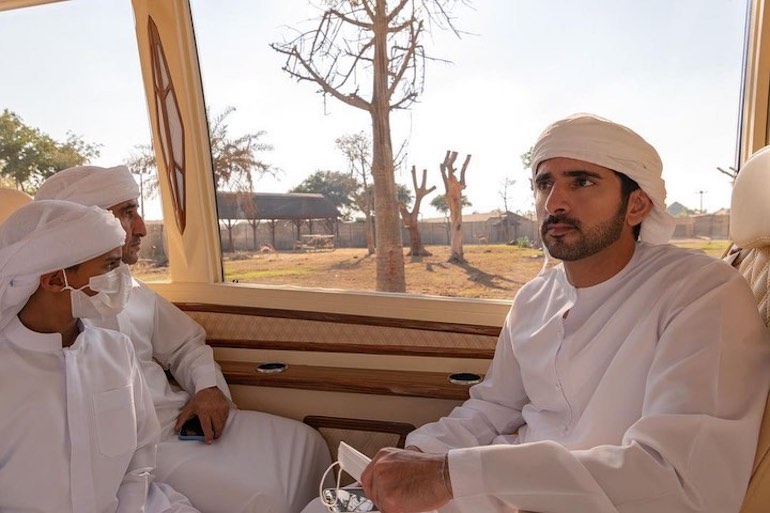 After being shut for almost 2-years, Dubai Safari Park opened its gate to the visitors in October 2020. The park which is home to around 3,000 animals, hosted a special guest over the weekend. Any guesses who that guest was? Well, it was the crowned prince of Dubai, Sheikh Hamdan bin Mohammed Al Maktoum. Sheikh Hamdan visited the Dubai Safari park with his friends and family, check the pictures and videos right away.

Also read: The First Terra Pavilion To Open Doors At Expo 2020 On January 22

Sheikh Hamdan And His Friends Were Seen Feeding Giraffes

Sheikh Hamdan, who is known for his love for animals, was seen touring the park with a group that also included his offsider, ‘Maj’, Mohammed bin Ahmed Jaber Al Harbi. Popularly known as Fazza on social media shared a few stories on Instagram.

Also read: Live For Free In Dubai For 24 Hours This January, Here’s How

Fazza and his group were feeding the giraffes, pausing for selfies, and snapping photographs of rhinos from the comfort of a very plush bus. While everyone was enjoying their time at the park, it was Maj, who was having the most fun. Maj was seen holding a golden python, which was around the youngster’s shoulders. Ain’t that amazing?

Also read: In Pics: Ain Dubai Lights Up The Night Sky In Dubai

Well, in terms of the park, you can spot tigers, lions, gibbons, Arabian wolves, giraffes, and varied other animals in the park. The park also has a new journey – Safari Journey, which lets you enjoy the sight of the animals, in a private car, with a private guide who will give you VIP access to the park. It’s priced at AED 85 for adults and AED 30 for children. The ordinary ticket to park is AED 50 for adults and AED 20 for children. So you are planning to visit the park soon, and then you can book your tickets online at Dubai Safari.ae.

Passenger On IndiGo Delhi-Pune Flight Says He Has...