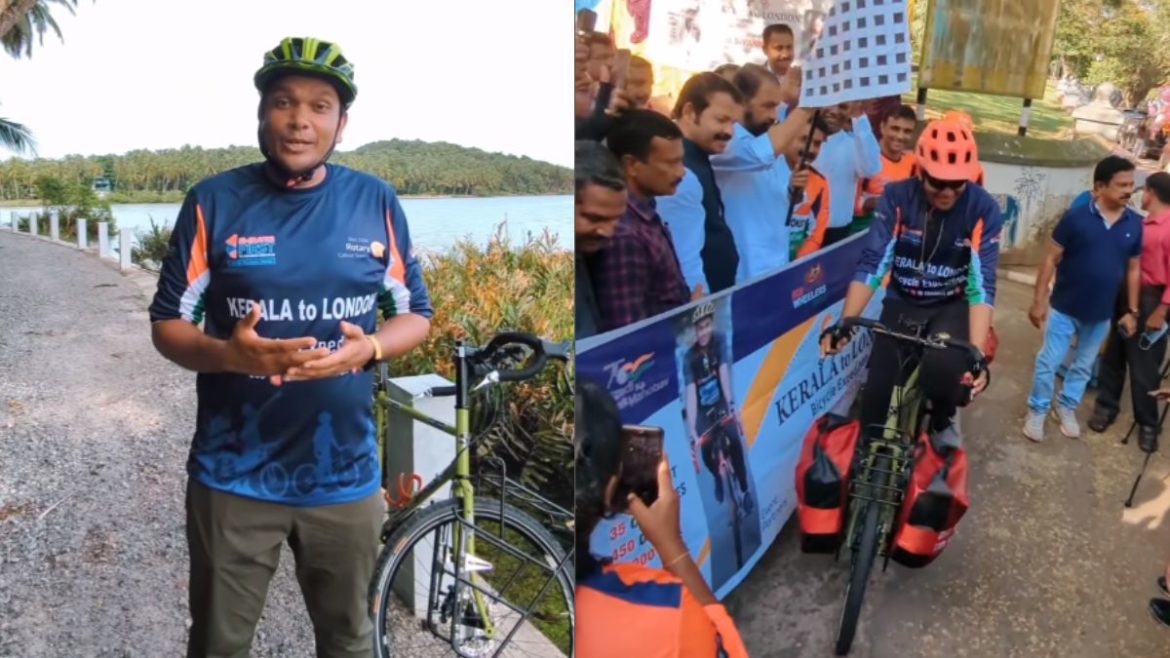 A cycle ride is always exciting but imagine cycling 39,000 km to over 35 countries! Sounds impossible? Well, you will be pleasantly surprised to know that someone from our very own Country quit his well-paying job to do so. Travel enthusiast Faiz Ashraf Ali from Kerala recently took off to London on his cycle as part of the “Azadi Ka Amrit Mahotsav” celebrations on the eve of our 76th Independence Day. Ali is supposed to cover 30,000 kilometers in 35 countries and reach London in 450 days. The Kerala techie’s latest solo cycle expedition from Kerala to London on Monday was flagged off by Kerala’s education minister V Sivankutty. Read on to know more details about Ali’s thrilling cycle expedition to London.

Kerala techie Ali’s incredible cycle expedition from Kerala to London is organized by the team, Eco Wheelers. The team with the slogan “From Heart to Heart ”, believes Ali to spread the message of love and peace among the world countries through the cycle expeditions. The Kerala techie’s journey is scheduled to take at least 450 days to complete. Eco wheelers have been constantly updating about Ali’s Cycle Expedition on Instagram and Facebook. There were several Facebook live sessions showing the Keralite embarking on his journey to reach London. On one of the Instagram posts that reveal Ali giving a speech before going on his journey, Eco wheelers wrote, ” Proud moment of every Keralian. Kerala to London Cycle Expedition Started. Our sponsors are Emirates First, Para John, Rotary ”

The Kerala-based Ali’s humble beginnings of his cycle expeditions began after the travel enthusiast left his well-paying IT job. Since then he has gone on several cycle expeditions with the help of the Eco Wheelers Team. For his current cycle journey from Kerala to London, Ali is expected to cover 30,000 kilometers in 35 countries and reach London in 450 days. As per reports, the organizers of the expedition have revealed that the Kerala cyclist would skip Pakistan and China as the countries did not grant him visas. Apart from that, Ali’s journey basically includes him reaching Mumbai by cycle. Then Ali would board a flight to Oman and from there he would continue his cycle expedition and travel through UAE, Saudi Arabia, Bahrain, Kuwait, Iraq, Iran, and Turkey.