There is something divine in any every creature on earth. The animals, the insects, fishes you, name it. So it really isn’t a surprise to witness cows and monkeys near places of worship. But a Kerala temple takes divinity and spirituality one notch higher. Literally! Sri Ananthapura temple in Kerala’s Kasargod witnessed a new devotee entering the temple. A crocodile entered the temple premises. On the request of the head priest, the majestic creature marched back to its home, the temple pond. According to locals, Babiya the crocodile has made the temple pond its home since the past 70 years. Interestingly, this crocodile is known for its vegetarian diet of temple offerings. Read on to know more about this friendly neighbourhood crocodile!

A vegetarian crocodile Babiya, resides in the temple pond of Sri Ananthapura temple in Kasargod, Kerala. After more than 70 years of staying there, the crocodile stepped out of the pond and entered the temple premises on October 20. The priests were stunned and they vouched that this happened for the first time. Chief priest Chandraprakash Nambisan asked the crocodile to back to the temple pond. And the creature took a u-turn and headed back.

Meet Bibiya, The vegetarian crocodile that guards a temple in Kerala.

This picture was taken when she visited temple early morning..

She lives in a lake temple in a small village called Ananthapura, in Kasaragod district#BeautifulKasargod pic.twitter.com/hOnqrXeKT3

Interestingly, Babiya the gentle crocodile is vegetarian. Fascinatingly, no one has an idea of how the creature got here. But locals state the crocodile made the temple pond its home for the past 70 years. Babiya mainly eats temple offerings and comes out immediately after the temple priest calls for it. An employee of the temple told Hindustan Times“The priest feeds Babiya twice a day. At times he puts the rice ball right into its mouth. The priest has a unique chemistry with Babiya. The temple pond has enough fishes and we believe it never attacks or consumes them. It is a fully vegetarian crocodile keeping with the tradition of the ancient temple.” 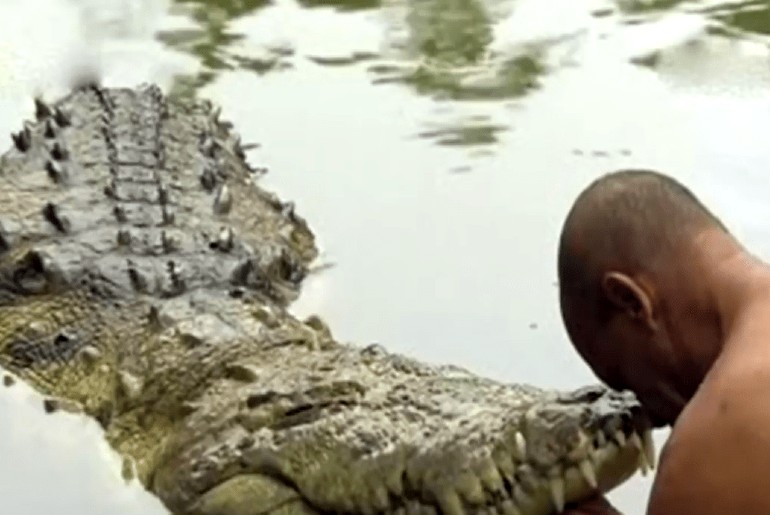 Some locals believe, circus officials might have deposited hatchlings at the temple pond years ago. And none of them survived except Babiya. Interestingly, this gentle giant never attacked anyone till date despite the fact that its a mugger crocodile. According to wildlife experts, mugger crocodiles feed on fish, rodents, reptiles and even big prey. But Babiya only eats slices of banana, puffed rice and other temple offerings. Visit the Sri Ananthapura in the Ananthapura village. Devotees believe Babiya is the messengers of Lord Padmanabha or Lord Vishnu. You must add this temple to your wishlist to witness this vegetarian gentle crocodile in action. Meanwhile, watch this video to know more about India’s unusual temples.