Kumartuli Is A Museum District Of Art In Kolkata 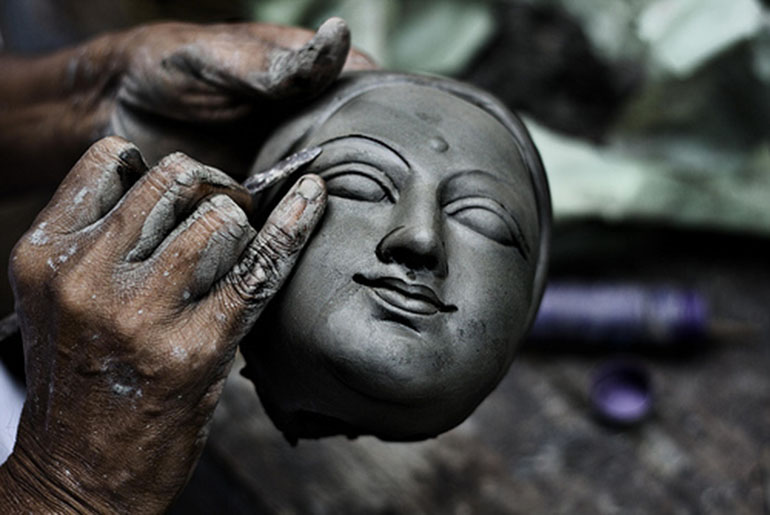 Kumartuli is Kolkata’s potters’ district and is home to hundreds of artisans who sculpt religious effigies throughout the year. Kolkata was once the capital of British India. Our colonial masters assigned distinct living and working areas to people belong to various professions. While these boundaries are now being blurred, Kumartuli remains Kolkata’s potters’ district. Potter families have lived in the same area for decades and the art form was passed down from one generation to another. Old Kolkata families continue to buy from the same artisan who makes their Durga, Saraswati and other idols, year after year. Kumartuli is in the old native-town part of North Kolkata. The Hooghly river which flows by its walls also provides the clay for the idols sculpted there. Nearby is the mansion district of Shobhabazaar which was home to the nobles who patronised the potters’ art form. Every winding lane in Kumartuli is lined by rudimentary workshops that serve as both a living and working space for the artisans. Depending upon the time of year, they fashion a basic framework of a god or goddess from bamboo or straw. Then they add layers of a special type of clay to create multiple arms, legs, crowns and other features. Don’t be surprised to see disjoint heads or hands lying around. The final step is painting and accessorising the idol. Spend a few minutes watching the artist carefully draw and paint the devi’s eyes. Gorgeous saris and ornaments lend a majestic touch to the final product.

Try to visit a few days before a festival and observe the idols in various stages of completion. Don’t mind if the artist refuses to talk with you; their work requires intense concentration. Listen to the chatter of upbeat Bengali families and join in their festive spirit.

At a time when art is becoming more commercial and mass-produced, Kumartuli remains a bastion of art, artisans and artistry.

Also read: Ghalib’s Haveli In Puraani Dilli Is The Oldest Quarter Of The City And A Must Visit!

Kumartuli, Hatkhola, West Bengal. The best time to visit is from June to December, during India’s festive season.