Why do people have vertigos? Why do they feel that uncomfortable swirl inside the head while gazing upon the tiny town from atop the mountains? Because they are fear falling ‘down’ from the great height. Yes, gravity is known to pull objects downwards. But then there are places on planet earth that can straightway defy the gravity, drawing objects upwards. And the most popular place within India where this stupifying phenomenon occurs is the Magnetic Hill of Ladakh. On a secluded road, 30 kilometres far from the Leh city, cars are seen rolling up the hill, even without a driver. To know why this miraculous phenomenon occurs here, read on.

Watch Your Car Go Upwards, All By Itself

Travelling around 30 kilometres west of Leh, you might come to a halt at a board the defines, “Magnetic Hill: The phenomenon that defies gravity. Park your vehicle in the box marked with white paint on road.” Ask a local, there’s a possibility that the person will explain that the path was once a road to heaven and God used to pull up the worthy candidates through this road. That’s the myth in which some natives still believe. But science tells a different story. In fact, there are two scientific explanations for this phenomenon. One says, the surrounding hill has a powerful magnetic force with which it attracts objects towards itself. Another explains that the cars actually go downhill, but they seem to go upwards due to an optical illusion. Which theory to accept, well that’s something you can decide only after visiting the hill. Meanwhile, there’s something in this world called anti-gravity workout. The most ideal time of visiting the Magnetic Hill of Ladakh is from July to October, as the road remains clear during this time and thus the reverse gravity can be experienced best.

Also Read: Fly In A Zero-Gravity Flight And Experience Floating In Space Like An Astronaut

Other Examples Of Anti-Gravity Hills

Another similar anti-gravitational spot in India is Gujarat’s Tulsishyam hill and vehicles parked close to this hill are known to go upwards if hand brakes aren’t applied. There are a few more examples of such anti-gravity hills present around the world. In Scotland, the Electric Brae is one such hill. The Gansu in China is also an example of the same. 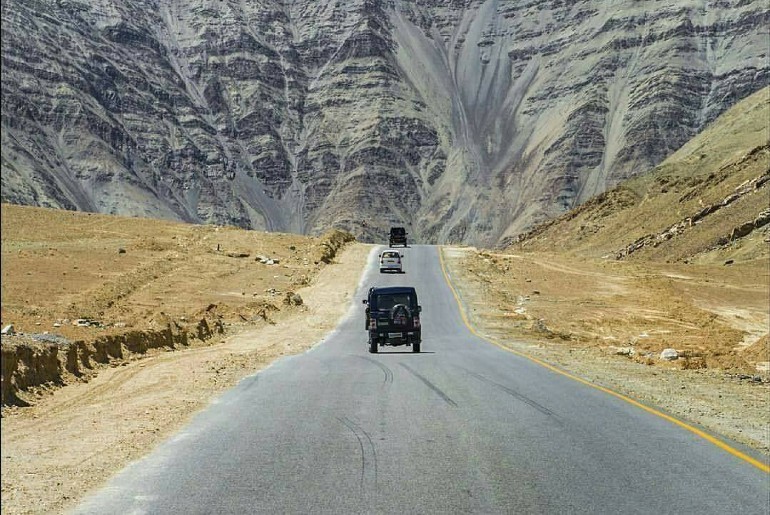 Also Read: Canada&#8217;s Hudson Bay Has Less Gravity Than The Rest Of The World

Have you already visited one of these bizarre hills? If yes, tell us about your experience in the comments section below. Meanwhile, here’s a virtual tour of Ladakh from the comfort of your home: