In a bid to revive tourism after the coronavirus pandemic, the Nepal government has planned to build the tallest statue of Lord Shiva in the nation. The statue will come up at Nepal’s Pumdikot of Pokhara. As per reports, the full-sized structure will have a height of 108 feet and the sitting idol will be 51 feet tall. The construction is almost 45 percent complete. The estimated cost of this idol installation work has been nearly ₹400 million. A similar 108-feet statue of Lord Shiva is located in India, at Namchi, Sikkim.

The Himalayan country in South-East Asia, Nepal boasts of the world’s highest cafe, World’s Highest Bakery Cafe at Lobuche. The highest mountain in the world, Mount Everest is also near the Nepal Border. Now, a new Shiva statue will come up at Nepal’s Pokhara which will be the tallest Shiva statue in the country, once completed. The city on the Phewa Lake, Pokhara in central Nepal is one of the major tourist attractions. By constructing the Shiva statue, the nation expects to boost religious tourism in the region. The statue will be 108 feet tall, with the sitting idol having a height of 51 feet.

Nepal’s tallest idol of Lord Shiva (full-sized structure will stand 108 feet tall and ‘sitting idol’ will be 51 feet tall) is under-construction in #Pokhara. The statue is being erected at #Pumdikot, Pokhara Metropolitan!

Nepal had also recently opened up the renowned Rani Pokhari’s Bal Gopaleshwor Temple for a day, first time after the 2015 earthquake, on the occasion of Bhai Tika.

Also Read: I Travelled To Nepal For 9 Days In Just ₹21,000 All Inclusive

According to a Times Travel report, Construction Committee Chairman, Chandrakanta Baral, has said, “We expect to complete the work within two years. Apart from a religious point of view, the spot is sure to support the promotion of tourism in Pokhara.” Tourism is one of the major revenue-generating sectors in Nepal. The economy of the nation largely depends on this sector, which has been hit hard due to the COVID-19 pandemic. Now, the government is planning to revive the sector through various measures, and the construction of the Shiva statue in Pokhara is one of them. Also, Bal Gopaleshwor Temple, which had opened gates on November 16  from 5 AM to 5 PM, had received a huge number of devotees who entered the premises wearing masks and gloves. 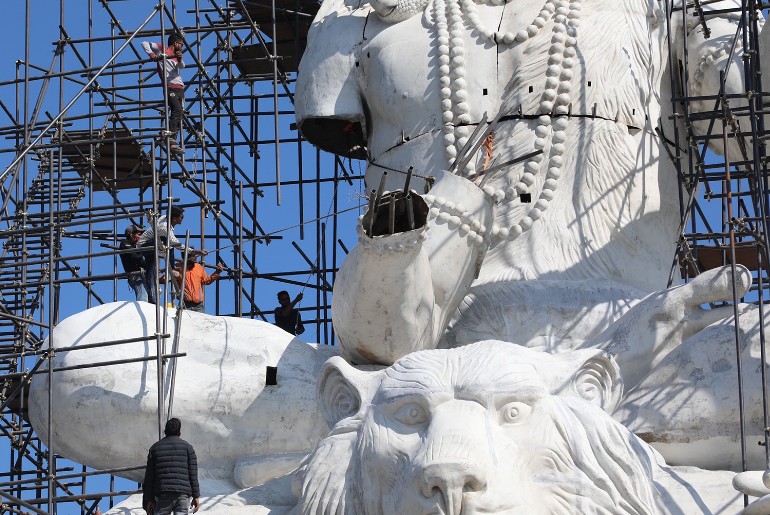 Nepal is one of the most picturesque countries in the world. The imposing statue of Lord Shiva will be an add-on to the already existing wonders of Nepal. Meanwhile, here’s a virtual tour of Kathmandu from the comfort of your home: