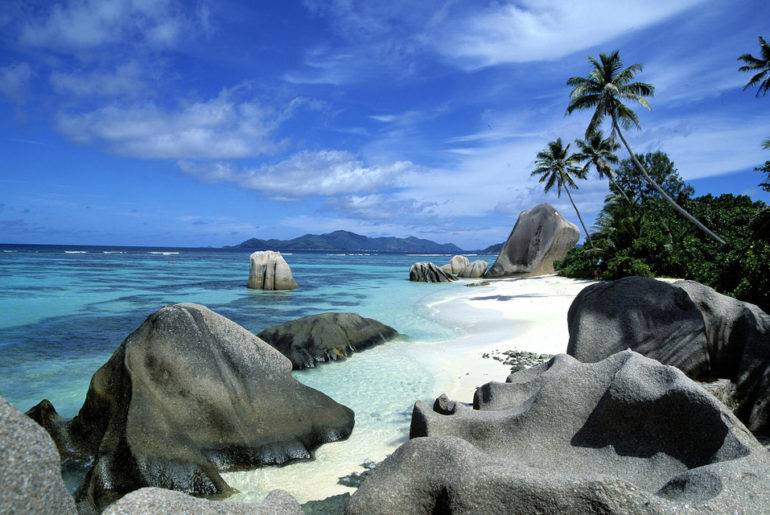 Giant nuts, endangered species, nature trails and bright turquoise waters all around you – Seychelles is no less than paradise on Earth.

Down South of India, off the East Coast of Africa and right in the middle of the Indian Ocean lies the beautiful island paradise of Seychelles. An archipelago of 115 islands made of corals and granite, Seychelles is on every traveller’s mind. You won’t find booze infused youngsters passed out on the beach or neon signs leading to beach clubs, but you’ll definitely find an alluring gradient scale. Confused? Well, one look at the beaches of this country and all you can see are the various hues of blue. It’s as if the horizon does not want to demarcate between the sky and the sea. Where the skies and the waters are so blue and nature so green – you can clearly see why Seychelles remains a natural wonder. The High-rise Coral Reefs At Aldabra

Okay, It’s A Paradise. BUT I WANT MORE.

You may have probably heard of club-hopping. Well, in Seychelles you can hop but from island to island. There’s 115 of them, make your pick. But if you don’t see yourself as Dora, let us help you. You can check out the world’s smallest capital – Victoria at Mahé. While you’re there, don’t forget to pay a visit to Michael Adam’s gallery and a hidden waterfall Port Launay. UNESCO World Heritage Site Vallée de Mai in Praslin Islands is home to the largest population of coco-de-mer palm trees that bear the largest seeds in the plant kingdom. Kim Kardashian may have taken inspiration from them (if you know what we mean). They haven’t changed since the pre-historic times, now if that doesn’t get your attention, what will? Maybe then you should head to Aldabra Atoll. That too is a record making place and a UNESCO Heritage Site.

The world’s largest population of giant tortoise is found right here. Aldabra Atoll also houses the largest raised coral reefs on the planet. Clearly, a place with so much ecological importance has to be kept away from the human touch. Hence, one can only take guided tours to this island. A big island with high-rise coral reefs encircling a lagoon with smaller islands – A perfect example of nature’s wondrous architecture are the Aldabra Atoll islands. White sands. Yes, Anse Source d’Argent in La Digue has dazzling white sand beaches and granite boulders. Good spot for a ‘woke up to this’ picture. With so many islands housing thousands of wildlife species, you can find endangered birds, animals and plants species in abundance. The nature trails, bird-watching and fishing will give you a glimpse of what this nature-country abodes. If there’s travel, there’s got to be an adventure. Being an island country, Seychelles offers you the best of underwater activities. Suit up! You’re going scuba-diving and snorkeling. That is the easy part. The real adventure begins when you find yourself among whale sharks, hawks-bill turtles, sting rays, putter fish and colourful corals! Or if you’d prefer to stay above the sea, just jet ski to the nearest island or go kayaking. Also read: A List Of All 46 Countries That PM Narendra Modi Has Visited Till Date Local Specialities You Can Enjoy

Heart Is Where The Hotel Is

Contrary to popular belief, Seychelles is not limited to honeymooners looking out for an exotic, luxurious and romantic getaway. Seychelles is popular among groups and families too. You can choose to live in the guest houses and budget hotels that also give you an ocean view. But if finer things attract you, choose from the many, many five star resorts and hotels that Seychelles has. Want to live on a private island? Guess what? You can make that happen too. YES. Rent a whole island. Fregate Island provides you with villa as well as island rentals. A Little Mystery Never Killed Anyone

Since you asked. There are lots of stories you can take home. How about Seychelles does not have an indigenous population. That’s right. It’s a melting pot of cultures. African, European, Indian, Asian origins – Seychellois people celebrate a blend of cultures. Also, there are very, very hospitable and serious about their natural reserves. Once home, you can also talk about pirates. Yes, Seychelles has been known to attract pirates and there’s also a story around hidden treasure that is protected by a ghost. It’s just a myth though, don’t worry. Remember we spoke about Vallee de mai – that is believed to be the original Garden of Eden. There’s no proof otherwise, so let’s stick to it. Turquoise Waters With A Mysterious Past

Book your trip to Seychelles NOW. Did we mention the weather is pleasant all year round? Also, you get a Visa on arrival. Also, it’s just four hours away!