Bollywood actress Rakul Preet Singh wore a PPE (Personal Protective Equipment) suit along with gloves and a mask at the airport to protect herself from COVID-19 infection as she flew to Delhi. She travelled from Mumbai to Delhi with her director Lakshya Raj Anand . The duo commuted to shoot for their upcoming film ‘Attack’. The actress posted Insta stories showing her new travel look of ‘PPE’ suit, face shield, gloves and mask to her fans. 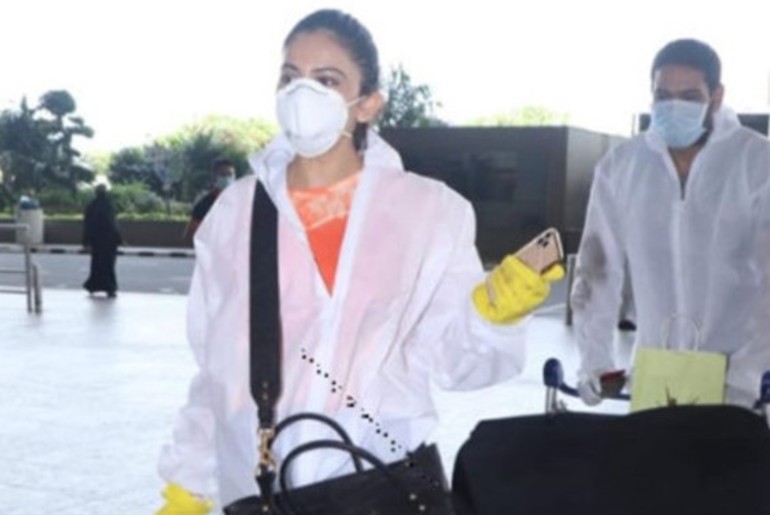 After two months of lockdown when inter-state flight have finally resumed, actress Rakul Preet Singh and director Lakshya Raj Anand on Thursday flew from Mumbai to Delhi to shoot for their upcoming film Attack. Rakul shared Instagram stories, where we can see her at the airport. In the image, she wore a PPE suit, face shield, gloves and a mask. She put on the caption “#Missionflight” and she also shared a video where she is heard saying; “Hi guys who would’ve thought that there will be a time that this is how we would have to travel. With shoe covers. ”

Also Read: Indian Civil Aviation Lays Down Rules For Future Of Air Travel; 40% Seats To Be Sold At Less Than Avg Price 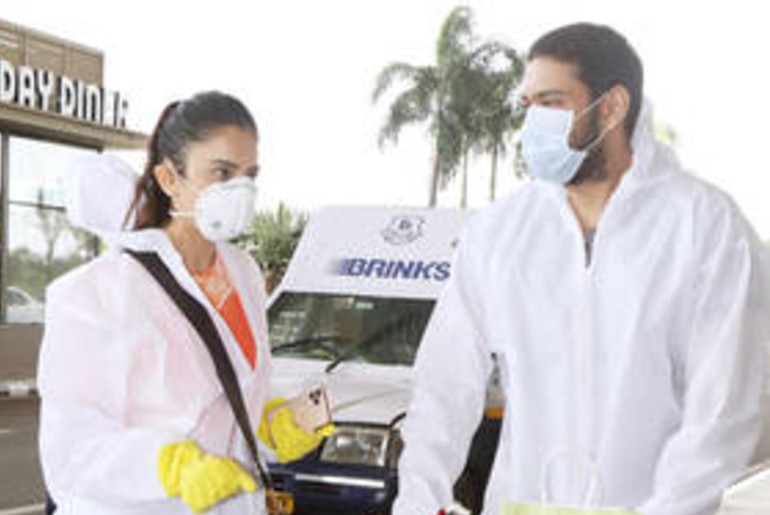 Rakul pans the camera on her director Lakshya Raj Anand, who travelled with her to Delhi. The filmmaker, seen sitting opposite to her, is directing her in the upcoming action thriller “Attack”. She said: “Guess, who I met”. Lakshya, who is additionally wearing a body cover, mask and face shield, is heard saying: “I am going to space”. She captioned the video: “Lakshya Raj Anand ready to #Attack”. Rakul then adds: He’s going to space to ‘Attack’, ‘Attack’, ‘Attack’. We will be shooting for the film Attack. That’s my director….. And we are social distancing.” On a similar note, Raashi Agarwal travelled from Mumbai to Delhi and she narrates her experience.

Some time back, Rakul Preet Singh also addressed an issue about her wearing a mask while working out and fans’ concerns about how it can restrict her breathing. In a clip shared, Rakul Preet Singh was cycling through the streets of Mumbai. In the first video, she shared that she is cycling for the first time. She says in a gleeful voice is that it was really fun to cycle. She then adds how this was a sort of cardio workout that she had not tried before.

Throwback : when the world wasn’t upside down but I was !! My yoga journey Began in 2018 and since then it’s pure joy to do my practice everyday. Life is all about balance. You don’t always need to be getting things done. Sometimes it’s absolutely ok to shut down , kick back and do nothing. ❤️ @anshukayoga this was the first time I did an inversion ?

The second video has the caption, ‘Don’t let your heart rate go up when u have a mask on’. She then says that everyone who believes that she isn’t giving herself breathing space due to the mask, should know that she is doing so. Rakul also said that a lot of people acknowledged that she shouldn’t walk with a mask on when she had gone out. Wearing a mask is extremely important while travelling. CCO of Vistara, Vinod Kanan talks about air travel during the pandemic, so do keep his points in mind.