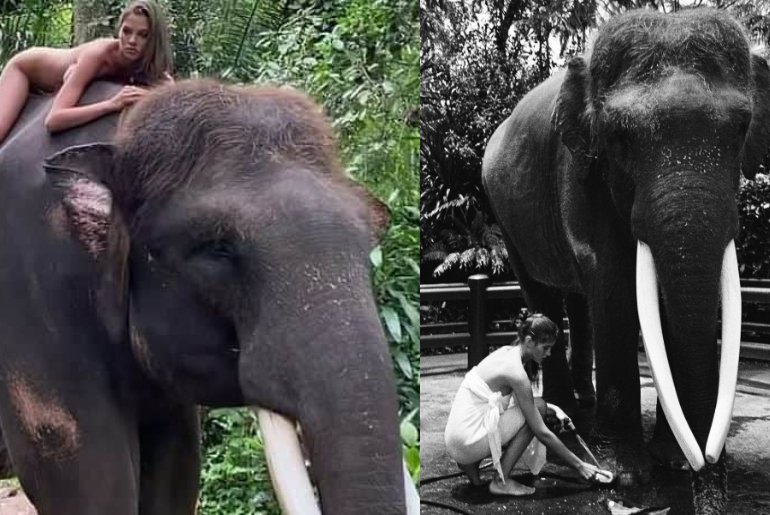 In this day and age of competition, influencers keep trying something new to engage with their followers and sometimes it works, while at times it backfires majorly. And a similar incident happened with Alesya Kafelnikova, a 22-year-old Russian social media influencer. The 22-year-old influencer has gained backlashes online after she posed naked on top of an endangered Sumatran elephant. Here’s everything you must know about it.

The Post Has Been Taken After Receiving Backlash Online

The influencer-model, who is the daughter of Yevgeny Kafelnikov, former world No.1 tennis player, shared a short video with the animal on her Instagram handle and had captioned it as Natural Vibes. The video-, however, didn’t go down well with the netizens, and it has been removed from the gram now.

People online got super angry after watching the video and left many comments under the post. Some comments read- “This is not cool action, leave the elephant and use a chair or something else. This is cruelty.”

“Poor elephant. Aren’t you ashamed to lie naked on an elephant? This is a living creature. Money overshadows everything.”

Also read: Tourists In Bali Forced To Do Push-ups for Violating Covid-19 Rules

Well, if the outburst of the people was not enough, several welfare organisations including, Save the Asian Elephants, also condemned her actions. Once things fueled up, Aleysa defended her video and explained that this was shot from an aesthetic sentiment towards the elephant.

She posted a picture on the gram and clarified her point on this whole issue. She said-

“If someone does not know, I have been doing charity work for many years, and one of my last donations was financial support to animals and to local people in the village, in which I took these photos. It is a pity that people see this as vulgarity, and not as beauty and love for nature. I love animals, I love elephants! And I love Bali so so much! I hope each of you will awaken an aesthetic love for my post and the beauty.”

Also read: Get Bali Vibes In Dubai At This New Rooftop Pool Coming Up At Ibn Battuta

Speaking about the photoshoot, she also added that it was a private photoshoot, and she didn’t mean to hurt the feelings of local people at all. She intended to show her love for animals and nothing else.

Well, what are your thoughts on this? Let us know in the comments below.