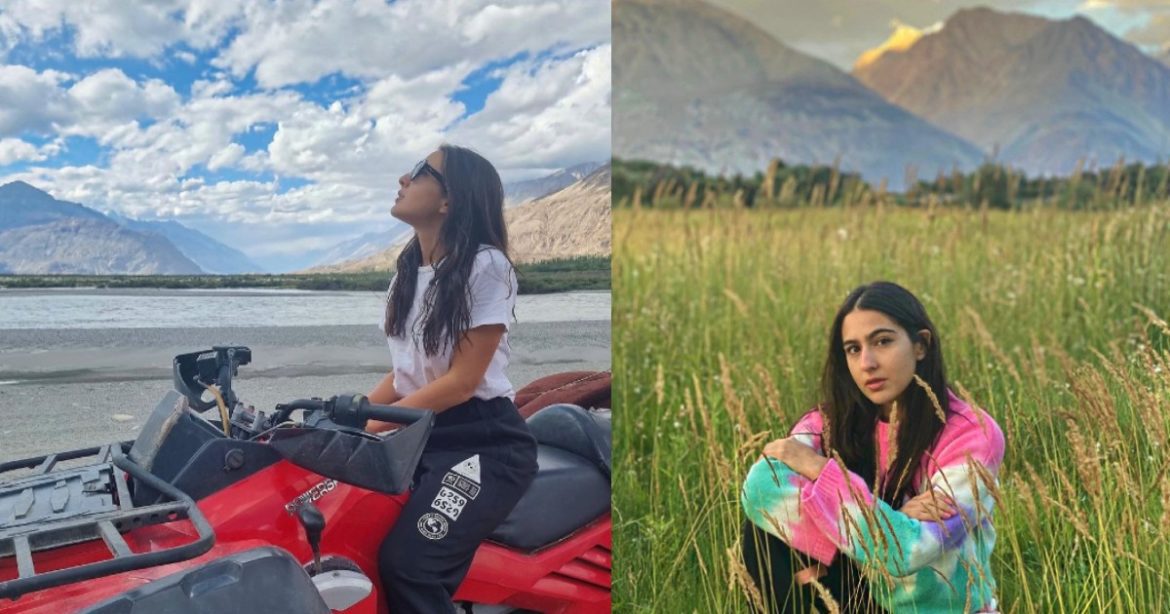 Sara Ali Khan has always been giving us major travel goals with her social media posts. She is one of Bollywood’s most avid travellers. We have not only seen her chilling on the beaches of Maldives and Goa, but she has also taken us to many spiritual tours like Kedarnath, Varanasi and the likes. Recently, she has shared some stunning pictures from the exquisite landscapes of Ladakh. In two of the pictures, we see her posing on a green pasture donning a rainbow-hued baggy top. In another picture, she is seen riding an ATV.

In 2021, Sara Ali Khan had visited Ladakh with actress Radhika Madan and singer Jasleen Royal. The three women had quality time in the magnificent mountains and they had shared stunning pictures from the location. In one of the videos shared from the vacation, Sara was seen twirling and soaking in the views of a sunflower field and the mountains wearing a Ladakhi robe, known as goncha. Along with the video, the actress wrote, “Teri Baahon Ka Sahara Jo Mila Hai, Is Bageeche Ka Kona Kona Khila Hai.”

Also, Radhika Madan had made a carousel post where is she was seen posing with Sara and Jasleen on a red Sportsmen 570 ATV in Ladakh’s Nubra Valley.

Actress Sara Ali Khan made a video compilation to give a glimpse into the places she has travelled to in India. The video had Sara’s clips from Delhi, Goa, Banaras, Bihar, Jaipur, Vaishno Devi and Rishikesh. The first clip of the video was from India Gate in which Sara said, “Namaste Darshako, Hum Hain India Gate Mein yaani Bharatiya Darwaze Par.” In Sara’s clip from Vaishno Devi, a man was telling her that she won’t be able to enter the temple if she committed paap or sin. Sara asked him,  “Toh agar maine paap kiye hai toh main darshan nahi kar paugi. Main andar jaa hi nahi paugi”

Sara Shares Carousel Post Of Her Travel And Food Pictures

Sara had shared another carousel post with some of her travel and food pictures. In one of the pictures, she was seen indulging in early morning yoga from the mountains. In another photo, she was sitting in front of the snow-capped mountains. Also, in one of the clicks, Sara was unwinding on the sandy beach and watching the sea.

The down-to-earth reactions of the actress are winning the hearts of many.