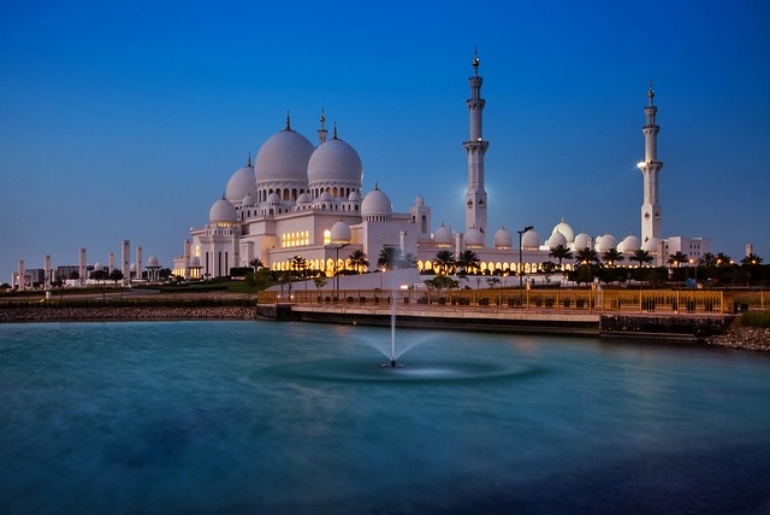 If you’ve lived in the UAE you are sure to know what a wonder the Sheikh Zayed mosque is. The mosque is recognised as a landmark, not just by the locals, but also by tourists from around the world. And now, the Grand Mosque has been recognised as one of the Top Rated Landmarks in the world.

Trip Advisor has rated the Sheikh Zayed mosque as third largest landmark in the world. The Travellers Choice Awards included more than 750 landmarks, across 68 countries.

Trip Advisor also revealed that the Sheikh Zayed mosque was by far the “youngest world landmark” to make it to the top ten list. Winners were determined using an algorithm which took into account the quality and quantity of reviews from Trip Advisor users, over a period of one year.

Located in Abu Dhabi the capital of the United Arab Emirates visitors are welcomed here to come and see the beauty of the mosque. Here are top 5 facts about the mosque :

The Sheikh Zayed mosque has seven huge chandeliers, designed by Faustig. The chandeliers are made of stainless stell and brass, along with 40 kgs of 24 carat gold. The prayer hall boasts the world’s largest chandelier which weighs a whopping twelve tonnes and is 15 meters in height.

The lighting system at the mosque is inspired by lunar illumination, which means it reflects the phases of the moon. The domes and façade bear a bluish grey colour. However, twenty two light towers work in unison to change the colours as the moon progresses through its cycle. You can experience darker cloud effects during the early stages of the month and brighter effects during a full moon.

The Grand mosque is home to the world’s largest hand-knotted carpet, which occupies the main prayer hall. Spread across 5,700 square meters, the carpet was designed by Dr Ali Khaliqi. The carpet is the hard work of 1200 artists, who meticulously knotted it for over a year, after which it took eight month to design it. The carpet is made of 70 per cent wool and 30 per cent of cotton.

Sheikh Zayed bin Sultan Al Nahyan, the founder of the grand mosque was very fond of white colour as it signifies purity. Respecting his likes, the main prayer hall has a marble embellished with unique floral art work, done in traditional Islamic designs.

The mosque is surrounded by 1096 columns, each hand-carved by a special inlay technique called Pietra Dura. The outer columns are made of white marble panels, decked with precious and semi–precious stones such as lapis lazuli, red agate, amethyst, abalone shell and nacre.