These 2 Friends Trekked To…
India, UAE, Oman Have Been…
South Africa Has New Covid-19…
Lara Dutta: Mahesh Bhupati Is…

Working from mountains has emerged as a ‘buzz phrase’ in the new normal of COVID-19. While most travel buffs are enthusiastic about the idea, a few are actually embarking on the experience. Such were the two mavericks from Kolkata, Sreejansheel and Milan. They left the cityscape behind and headed out to one of the most incredible Seven Sisters of India, Meghalaya. But while at the hilly state, they skipped a few popular tourist spots and went on to explore the unknown and the offbeat. Throughout their journey, they moved from one homestay to another, spent nights in tents and shacks and smartly switched between work and travelling. Here’s Sreejansheel taking over to narrate the adventurous story. 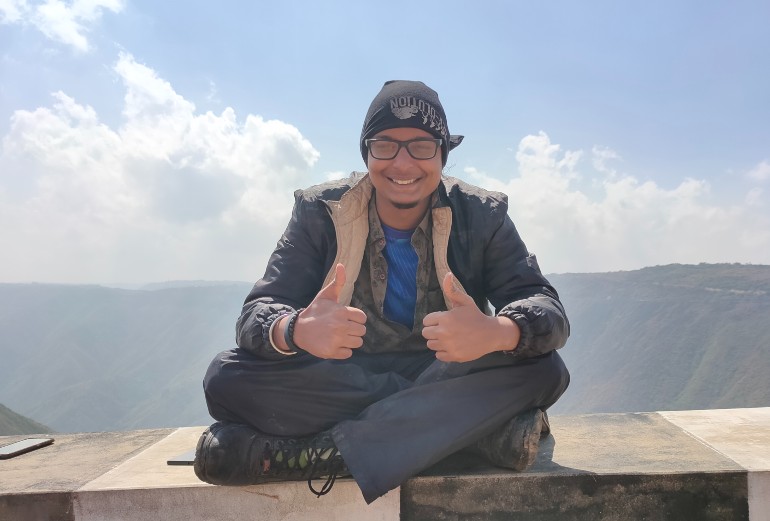 I and Milan had been in talks for some time about exploring some destinations which are not much visited by others. We did not have a concrete plan in the beginning, but Meghalaya just clicked on my mind. On March 27, 2021, we took our flights to Guwahati from Kolkata. From the Guwahati airport, we reached the Zoo Tannery road via an auto. 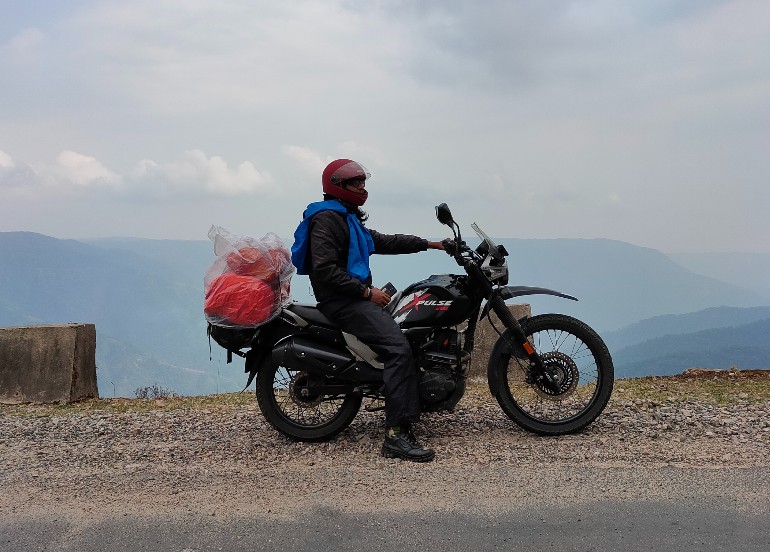 From there, we hired a Hero Xpulse bike, on which we had planned to explore all the places. The bike rent was ₹920/day for 18 days. Lone Campers, an adventure travel company, had planned our trip. After riding a few kilometres, we spotted the breathtaking Umiam Lake. We halted there for some time to enjoy the soothing river bridge and then continued on our journey towards Shillong. Shillong is roughly three hours away from Guwahati. 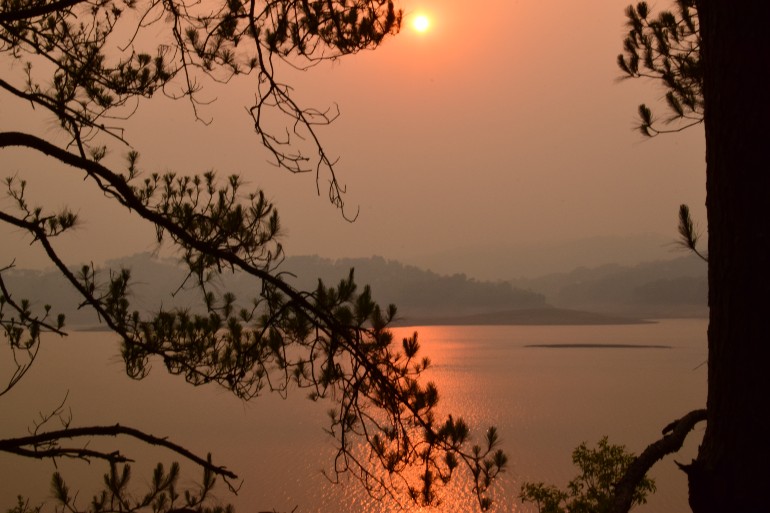 Meghalaya’s capital, Shillong is a very advanced, well-maintained city. At Shillong, we tried some local dishes in a local Khasi eatery. The mushroom pork over there was absolutely delicious. We had sticky rice, two pork dishes and also juices, and to our surprise, the entire bill was just ₹150. After having the meal, we stayed for the night at the Oxford Hotel.

Also Read: I Lived In Shillong For 20 Years And These Are The Hidden Gems I Discovered!

Ride From Shillong To Cherrapunji

The next day, after having breakfast, we hit the roads again and started for Cherrapunji. The road from Shillong to Cherrapunji was picturesque to the core, with lush green mountains, gorges and steams on both sides. On the way to Cherrapunji, we enjoyed a Pahari-style mixed chowmein with pork and another special dish served inside a bamboo shoot. After reaching Sohra, we put up at a family-run hotel. It was an ordinary homestay but there were mountains on all sides of it. 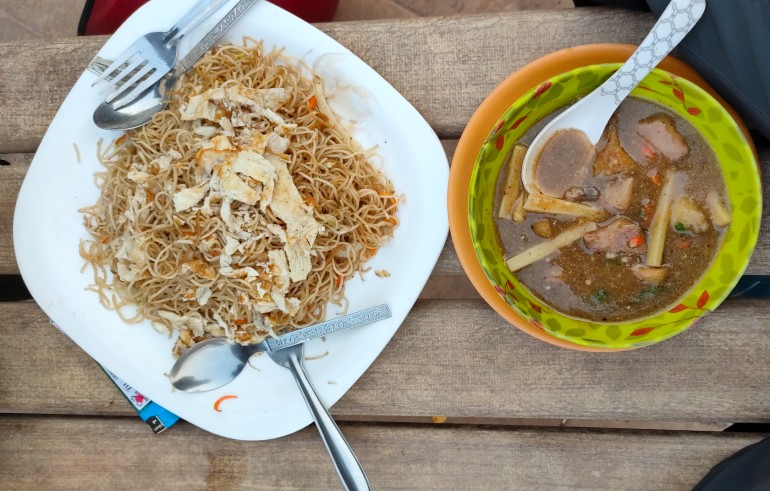 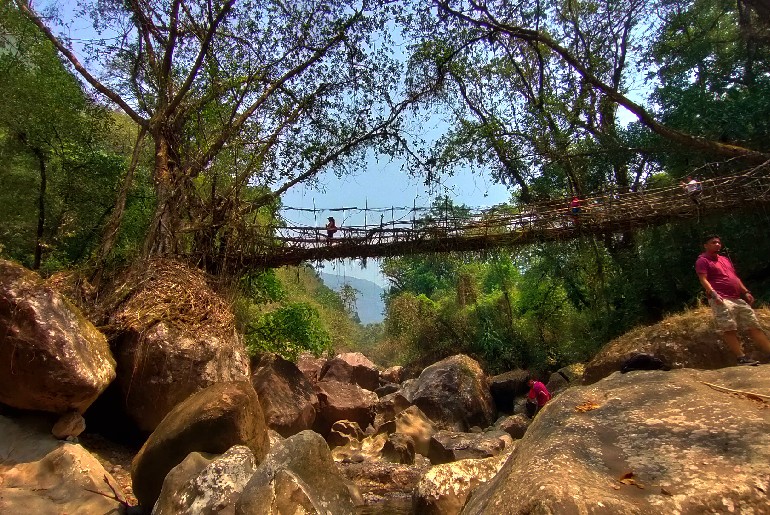 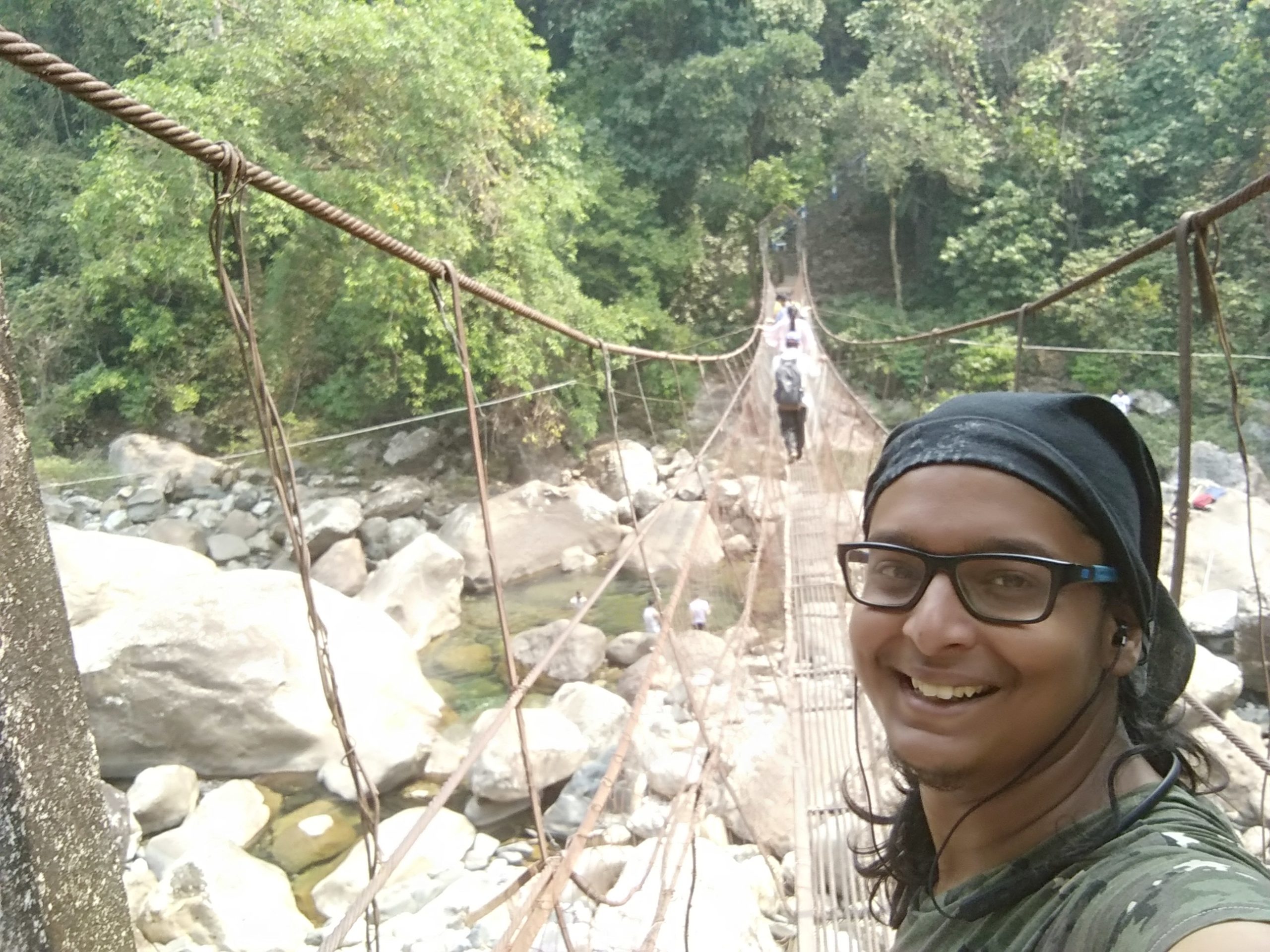 Near the Double Decker Bridge, there was a fountain, where we soaked our weary feet for some time. It was like a pleasant gift of mother nature after a tiring journey. 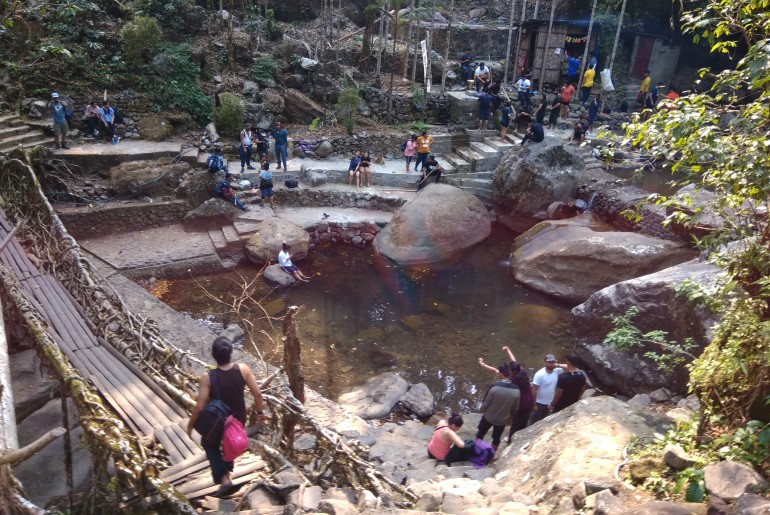 Rainbow Waterfall is one of the most pristine waterfalls in Meghalaya, which is around a 2-hour walk from the Double Decker Bridge. Many people who managed to reach the Double Decker Bridge were giving up on the idea of walking further to the Rainbow Waterfall. But probably this is where the beauty of the waterfall lies. It is less visited and thus looks like a spectacle from a fairy tale. The cascading white stream was falling down from atop and below, the water was crystal blue. I was mesmerised. 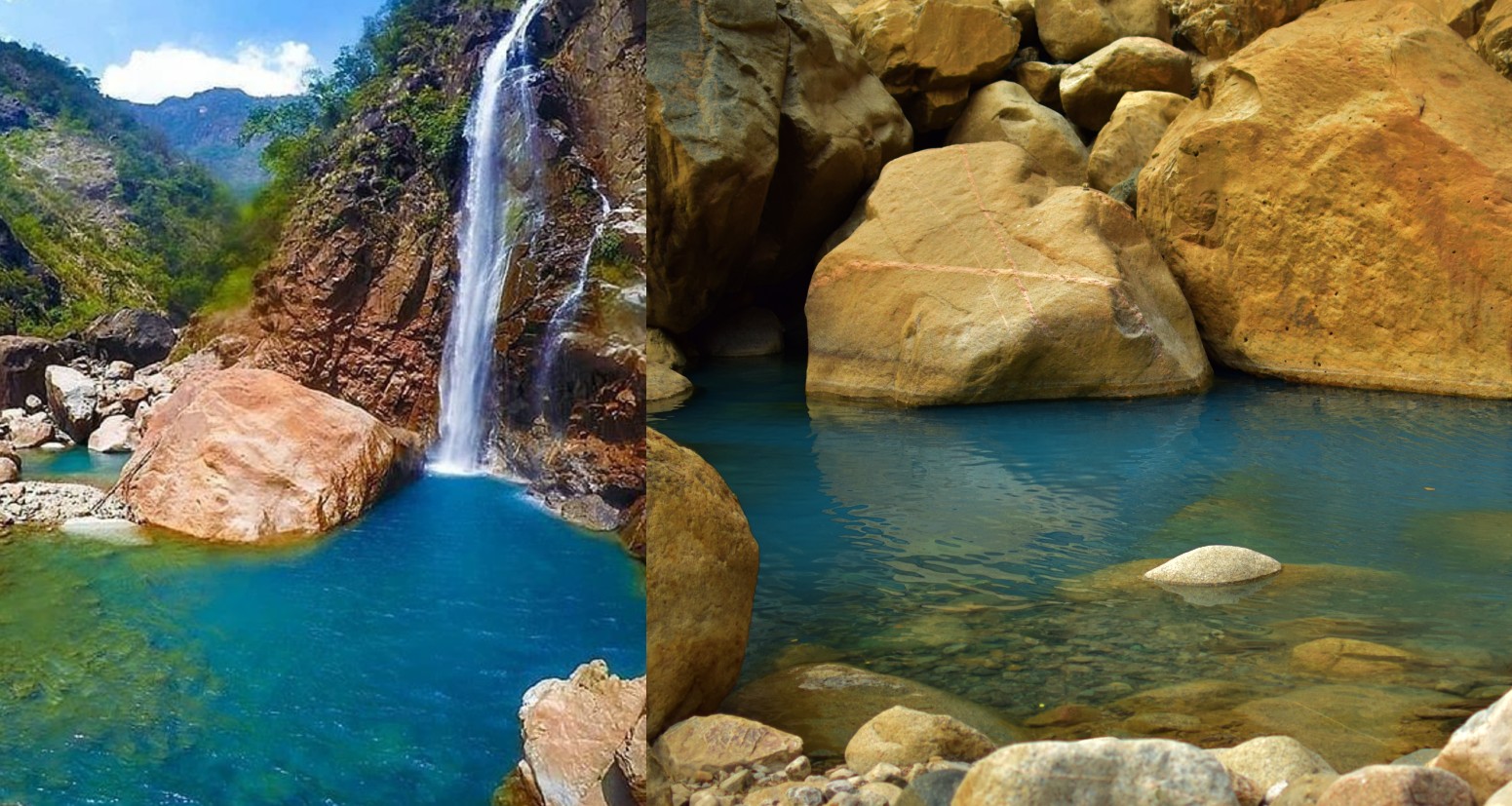 After spending some time in the Rainbow Waterfall, we came back to the Double Decker Bridge and halted in a homestay for the night. It was a night of heavy rains, which was obvious as we were in one of the wettest places in India. The next day, we drove back to Sohra.

From Sohra, we left for Aishabom in Mawjrong. The Mawjrong village is around 40 minutes drive from Sohra. I Shabong is a central point in Mawjrong which houses a restaurant of the same name. In fact, I Shabong was the name of the restaurant and the place got its popularity from it. At Mawjrong, we halted at a property called Cherrapunjee Cafe, a cosy countryside style villa with striking vistas all around. It had a quaint fireplace as well. We stayed at Mawjrong for two days. On the second day, we got the battery of our bike charged at a local car station. Finding a bike charging point in the remote expanses of Mawjrong was a major challenge. 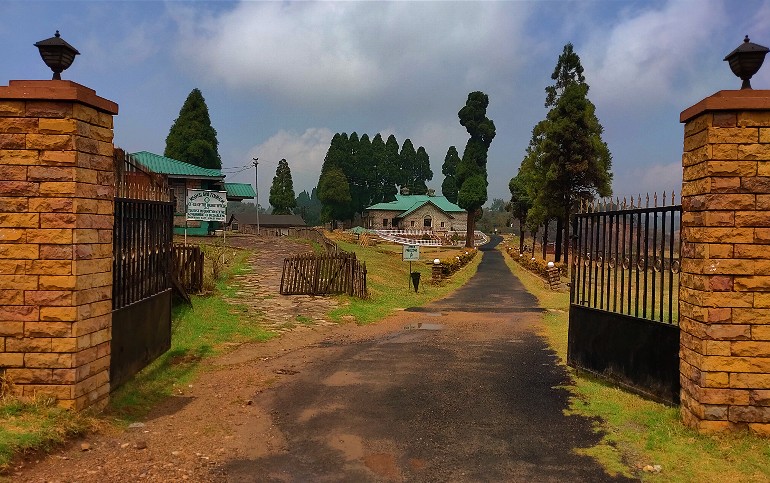 From Mawjrong, we headed to Kongthong, which is also known as the whistling village. A very interesting part about this village is that people here communicate with each other by whistling. In the village, there used to be a belief in primitive times that if people going into the forest call each other by names, an apocalyptic character would know them and follow them to their homes, harming their families. Irrespective of the belief, the whistling system is there in the remote village even today. 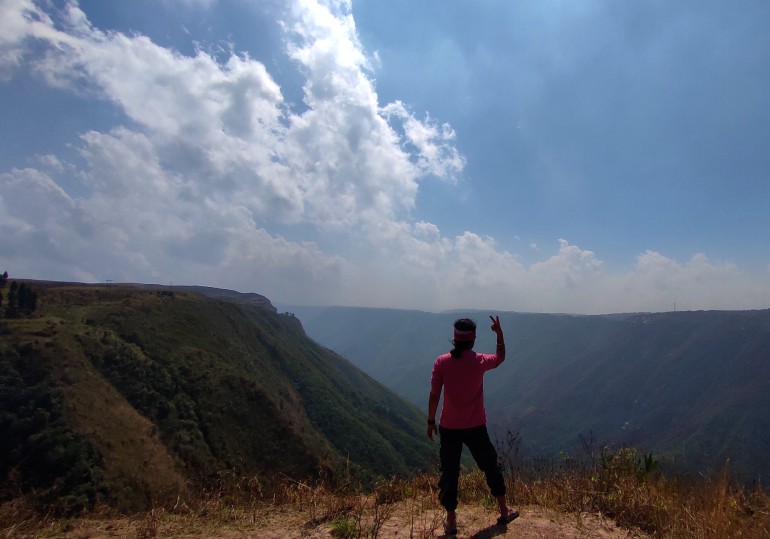 The views were mind-blowing. The roads cutting through the valley were secluded, flanked by table-top mountains, waterfalls and pine trees. 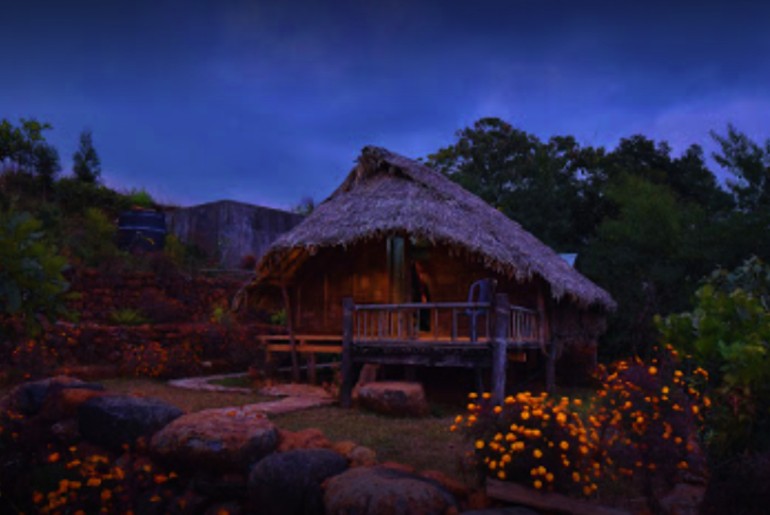 At Kongthong, we stayed at the Kongthong Traveller’s Nest, which is a gorgeous bamboo cottage. The cottage had a hanging fireplace too and the experience was magical. We stayed there for a night and hands down, it was a stellar location for stargazing. At the village, we also interacted with the locals and played with the local kids. The villagers were shy but they were very hospitable. 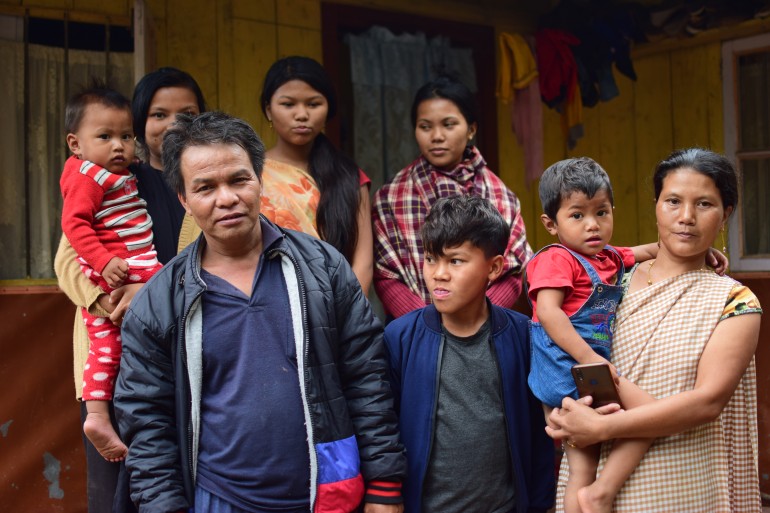 Also Read: My 8-Day Trip To Meghalaya With My Husband In ₹40,000 Including Flight Tickets

The next destination of our trip was Wahkhen. Here, we did the famous Mawryngkhang bamboo trek. The trek took around 3 hours. That day, we stayed back at Wakhken. From Wahkhen, we continued towards Jaintia Hills via Mawjrong. Till now, we were at Khasi Hills. 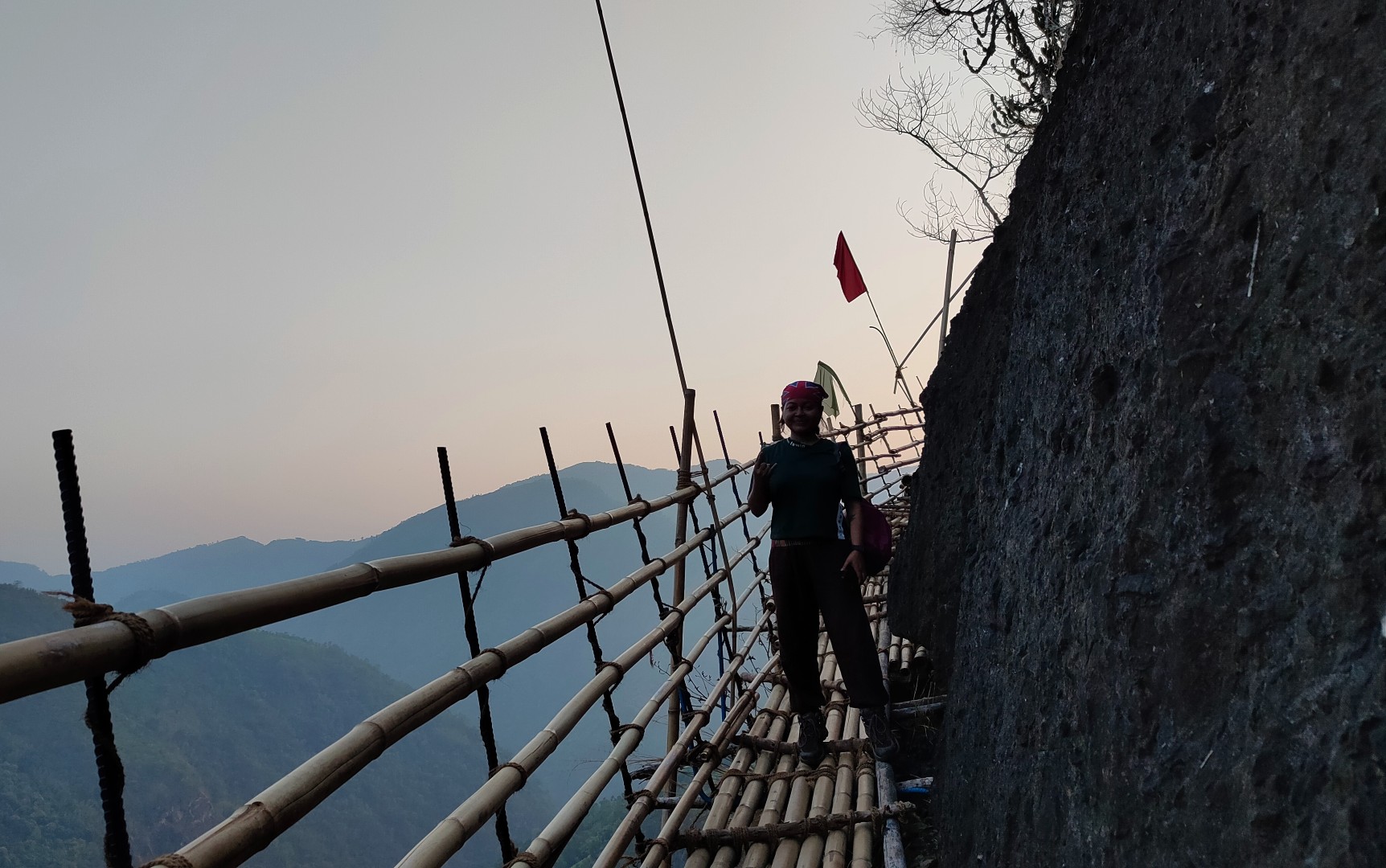 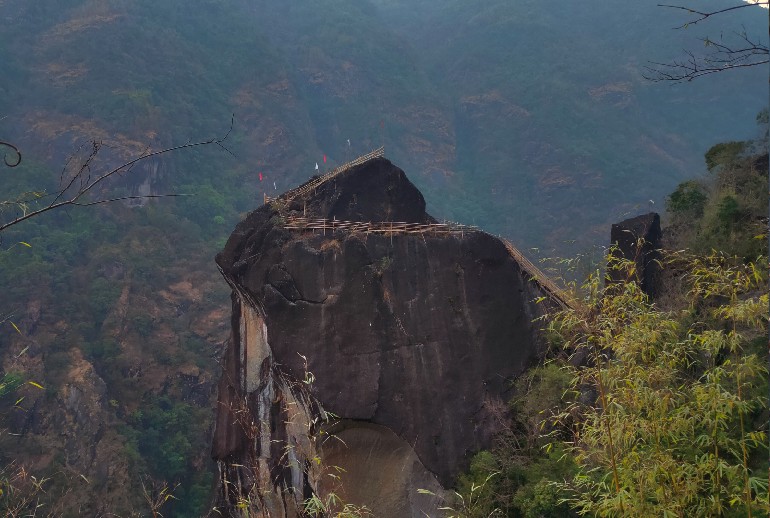 On this route, falls the Tyrshi Waterfalls. We drove further and reached near the Phe Phe Waterfall. We thought of halting at Phe Phe but there were no vacant camps. On request, a local agreed to let us stay in this shack. The night was bone-chilling. 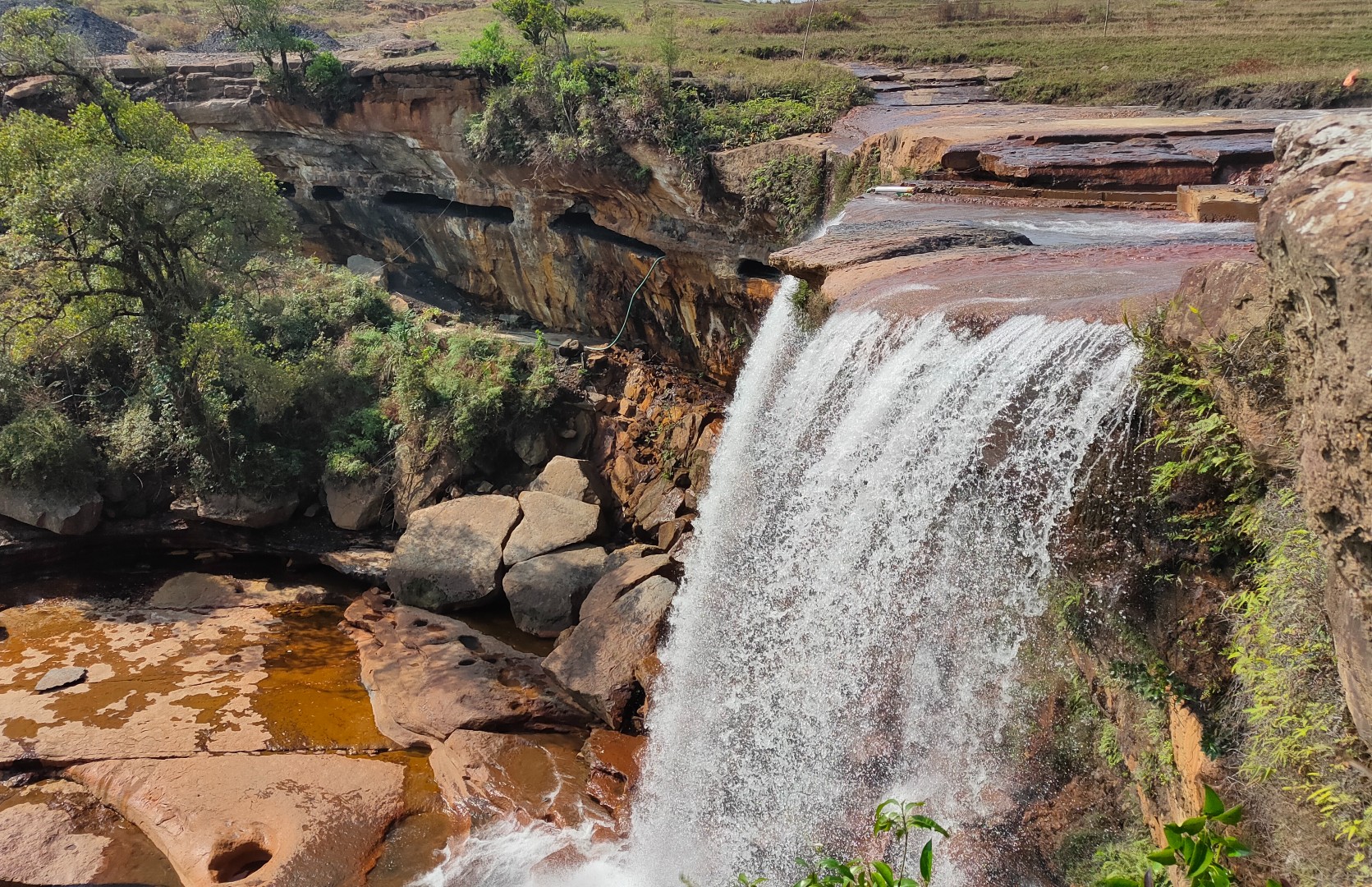 The next morning, we trekked to Phe Phe Waterfalls and also bathed in the stream. The water here is clear and green. There weren’t many people around during that time. We and another group of three friends were the only people over there. 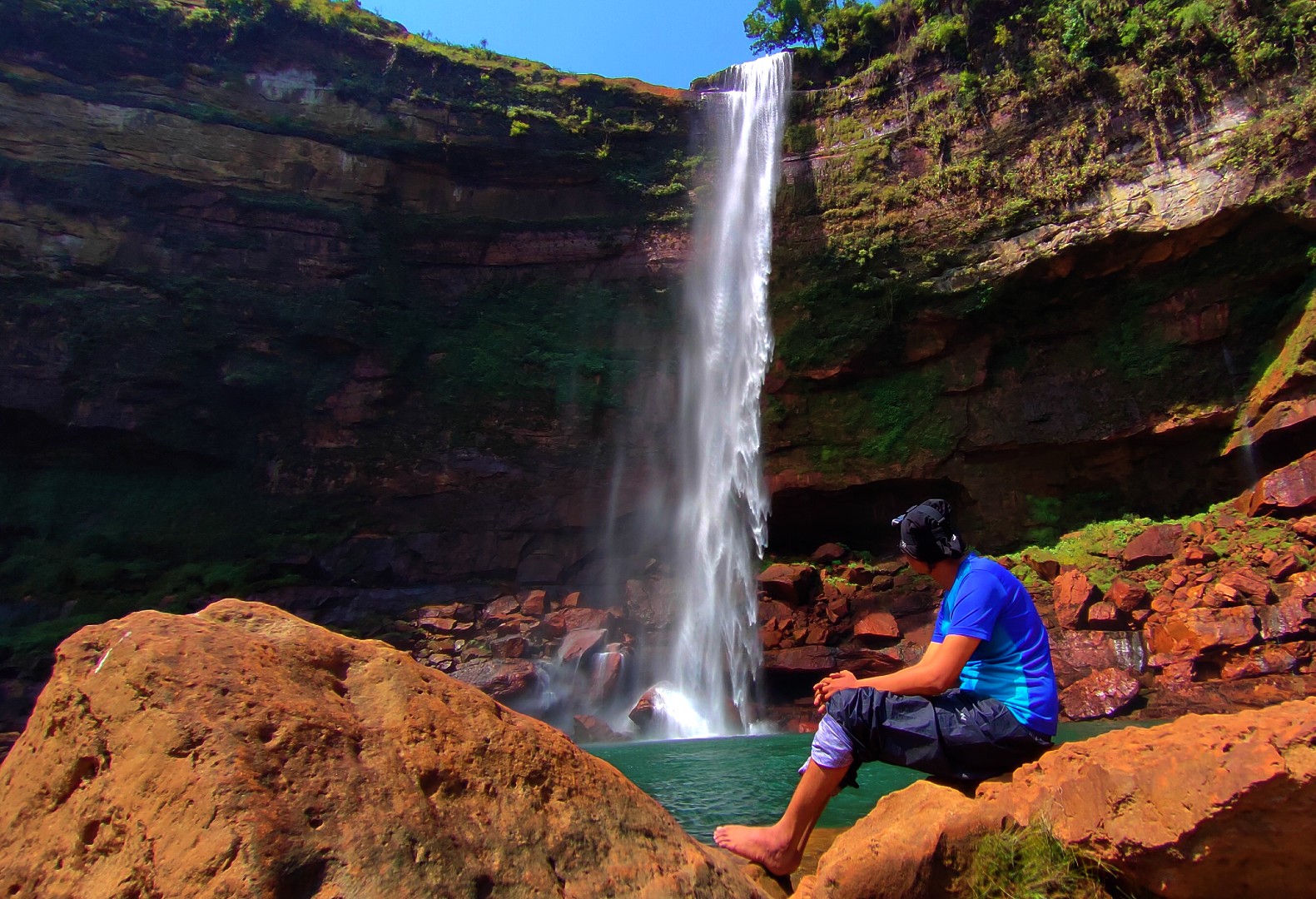 After some time, we went back to the shack for work. At around 4 in the evening, we went out for visiting the Krang Suri Falls. Krang Suri Falls has three bases, first, second and third. But due to lack of time, we explored only the first base and then started riding towards Dawki. 10 Stunning Waterfalls In India To Enjoy The Monsoon 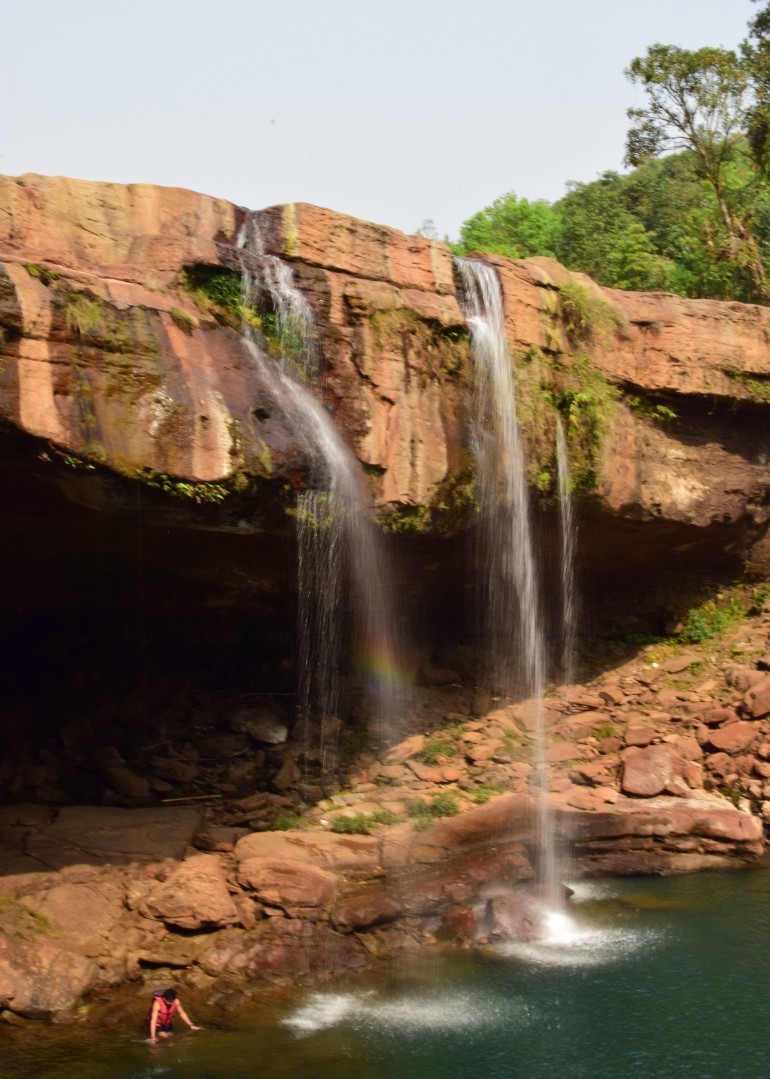 Dawki To Snongpdeng; Enjoying Pork Dishes With Locals By The Bonfire

When we reached Dawki, it was a bit crowded, so we decided to shift to the more isolated Snongpdeng nearby. At Snongpdeng, we stayed in our tent right beside the river. The next day, we moved to Beetlenut Resort and resumed working. 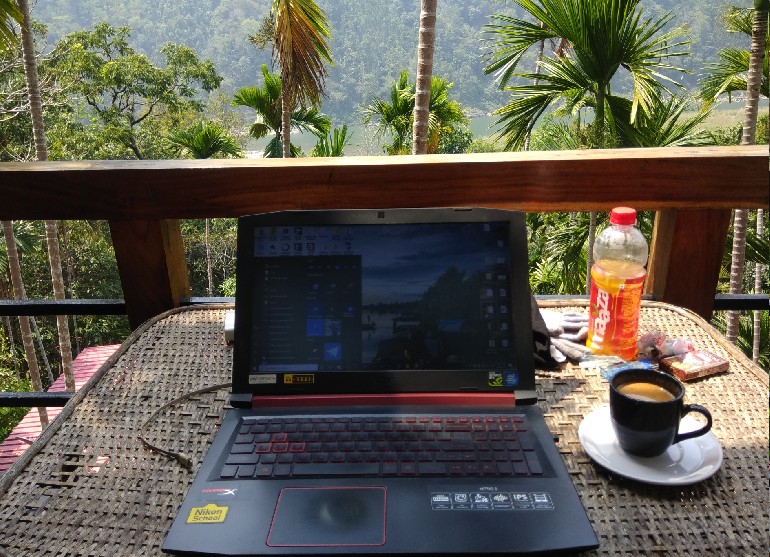 In the meantime, we went to Dawki and at Snongpdeng, took part in activities like canoeing. In the evening, we went back to the resort and spent time with the locals. The locals prepared some delicious pork dishes for us. They also arranged a bonfire for us by the river bank. 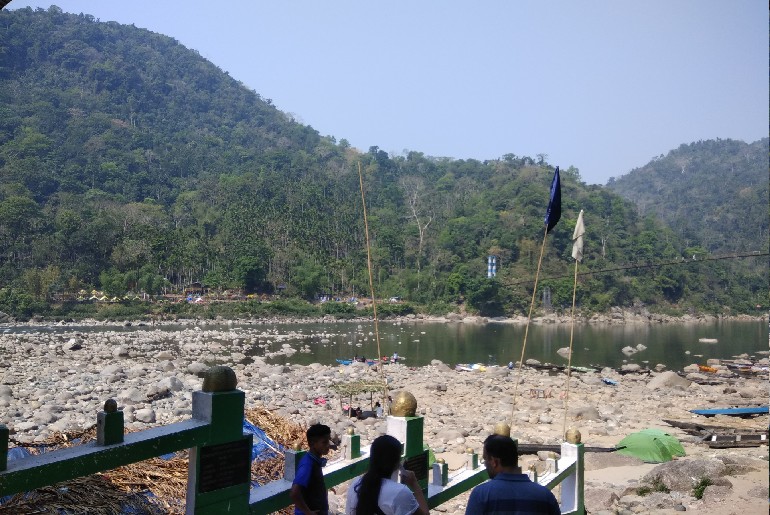 Mwlynbgna is around 50 to 60 kilometres from Mausynram. At Mwlynbgna, there is a natural reservoir known as the Umkhakoi Lake. We enjoying boating and canoeing here. Near Umkhakoi, we experienced an unconventional sort of trekking. We were walking for some metres and were swimming for a few, with life jackets on. 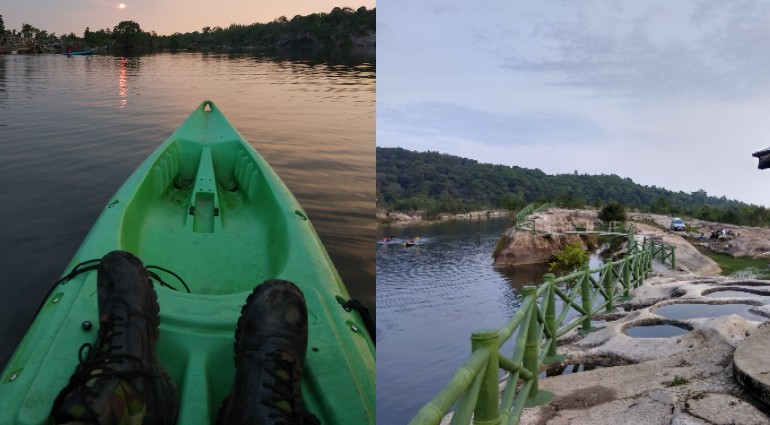 At Mwlynbgna too, we halted inside our own tent, beneath a shed. From here, we went to the Split Rock Trail. It’s a spectacular trail running between two rocks. The trail is a different kind of ecosystem altogether. There was an entry gate as well. 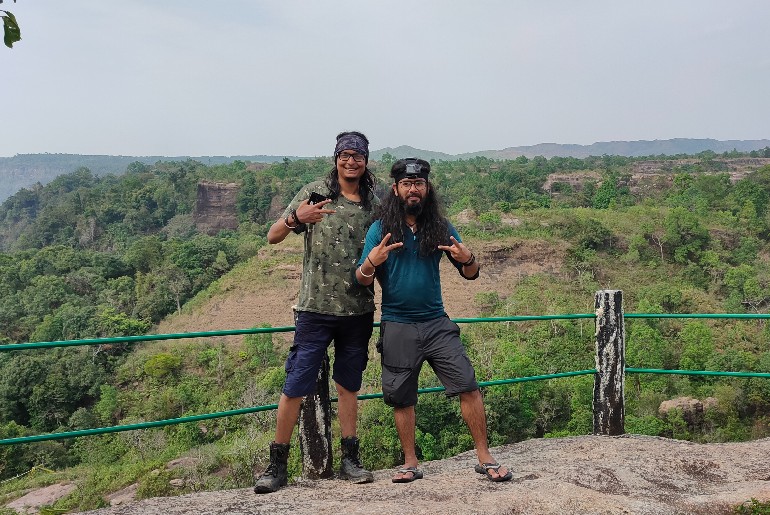 But it was closed. Milan was flexible enough to glide inside from below the gate. That was the last spot of our trip, and after that, we drove back to Shillong again for returning to Kolkata. While returning, we also visited Krem Puri cave, which is also the world’s longest sandstone cave.  We also visited the White Water Village at Kyrdem Kulai. 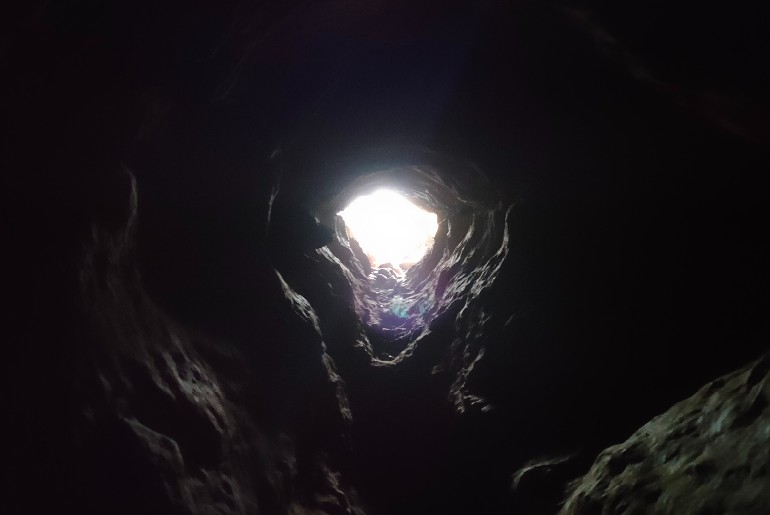 We Managed The Internet Connection With JioFi

We did not stay anywhere particularly for work. Wherever we found a convenient place, we worked. And JioFi was our constant internet support. In the entire journey, we covered a total of around 1253 kilometres. We visited Meghalaya during the time of Holi and returned back on April 14. The total expenses were around ₹28,000/ person. Overall, it was a profoundly enthusiastic trip.