10 Stunning Waterfalls In India To Enjoy The Monsoon 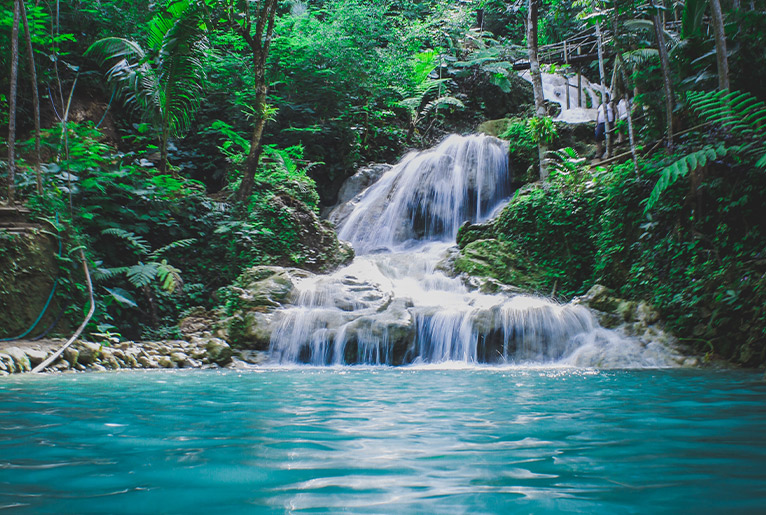 White waters cascading through steep hills, the loud thud just as they hit the surface, the cold splash on your face, verdant slopes surrounding you and all you can hear is the gushing sound muffled with winds and chirping – paradise, right? Waterfalls are nature’s best example of heavenly sights. And India is blessed with lots of them! Here are some stunning waterfalls in India that will take your breath away.

The fourth highest in the world and tallest in the country, the Nohkalikai Waterfalls of Meghalaya drop from a height of 1,115 feet in the wettest place on Earth – Cherrapunji. It’s not only a visual spectacle, but the legend behind the name of the falls is also quite extraordinary. It is believed that a woman named Ka Likai jumped from the cliff after finding out that her husband had cooked her infant daughter and fed it to her in a meal. Nohkalikai is the Khasi language translates to “The Leap of Ka Likai”. The story sure is tragic and gory, but the stunning beauty of the white waters falling down amidst green slopes takes away all the negativity filling you with just good vibes. The waterfalls are 5 km away from Cherrapunji and can be accessed through a drive to the tableland and a short hike after. There are several viewpoints and staircases around the cliff from where one can take different views of the falls. Also, did you know that Uttarakhand’s Tiger Falls is the highest direct waterfall in India? The tallest waterfalls in India at Cherrapunji. Source: onacheaptrip.com

How to reach: Nearest Airport – Guwahati (120 Kms from falls). If you want to take the road, the NH-40 connects Guhwati to Shillong and Shillong to Silchar is connect through NH-44.

Located on the borders of Goa and Karnataka in the Bhagawan Mahaveer Sanctuary and Mollem National Park, the Dudhsagar Waterfalls plunging from a height of roughly 1017 feet makes its place among the highest waterfalls in the country. Rightly called Dudhsagar or ‘Sea of Milk’ the waterfalls give you an illusion of milk falling from a goblet. The milky waters on touching the surface form foamy clouds and makes for an awe-inspiring view. The best sight can be captured during monsoons when the falls are in full force. However, the trek there can be a little dodgy. You can view the base of the Dudhsagar falls via a train, by a jeep or if you’re feeling adventurous enough –  by a trek. The months of September to May are perfect for enjoying the slow gush and for a picnic around. The monsoon months are perfect for thrill seekers! How to reach: Nearest station to the falls – Kulem. If you prefer road travel, you can take a taxi or a jeep from Mollem Village. However, both options require a bit of walking if you want to get to the base.

Best Time: November to February and June to September.

North-East India holds so many secrets, but what they couldn’t keep hidden away are the spectacular Seven Sisters Waterfalls. The Nohsnigthiang Falls is located 1 km from Mawsmai Village in the East Khasi Hill District. Forking out in seven streams, these waterfalls fall from a height of approximately 1,033 feet and are 230 feet wide! Lush green covers of Cherrapunji and the exotic flora and fauna of the region are not the only natural wonders adding to its beauty. Exactly at sunrise and sunset, the sunlight reflects on the falls, giving it a glistening effect and painting a striking picture. The seven streams most definitely make for another arresting moment. The splendour and majesticity of the falls makes it all too beautiful. When you’re in Meghalaya you will never run out of things to do. How to reach: Nearest airport: Guhwati (166km from the airport). Nearest Railway Station: Guwahati (99 Km from the station). Hire a taxi from Cherrapunji city.

India has its very own Niagara Falls nestled amongst the luscious forest cover in Kerala. The Chalakudy River originating in the Anamudi Mountains of the Western Ghats passing through the Vazhachal Forest cascades down magnificently as the Athirappily Waterfalls. Rightly called the Niagara of India, these waterfalls may not be as tall as others, but is definitely wider, making it grander than all. What makes the view of these silver sizzling waters even more spectacular is the wildlife that surrounds it. One can find species like the Great Indian Hornbill, the Asiatic Elephant, Bison, Sambar and many others in the forest. With flora comprising of teak, bamboo, eucalyptus and 35 other endemic species of flora and fauna – the area around the waterfall is also a biodiversity hotspot. Thick green forests in the background and white milky waters hitting the dark stone – will definitely up your Instagram game! If that doesn’t convince you, well, Aishwarya Rai danced to Barso Re in front of these falls – how about now? In the Sri Venkateshwara National Park of Chittoor District of Andhra Pradesh is the Talakona Waterfall plummeting down from a height of 270 feet making it the tallest in the state. The trek to the waterfalls is splendid as well. Blessed with abundant wildlife, you can spot endangered species of animals like Slender Loris, the Great Indian Squirrel, Mouse Deer, Porcupine and more. Giant plants and vibrant butterflies complete the picture. You do get a few glimpses of gushing streams as you make your way to the top. However, the upper reaches are where you can witness the beauty of the falls in one single look. More than their allure, it is believed that the water at Talakona has healing properties. Some might believe in mysticism, but the healing properties could also be credited to the medicinal plants and herbs that the water passes through before it makes the plunge. Another attraction is the Lord Siddheswara Temple close to the falls. Since there is more than one route, trekkers can choose what they’re comfortable with. And if you’re planning to visit Andhra Pradesh hen do check out the ultimate winter abode of South India, Lambasingi. Just as the Narmada River plunges down from a height of 98 feet hitting against the cold rocks it forms a misty effect giving an illusion of smoke rising from the river bed. Hence, the name ‘Dhuandhar’ translating to smoke-flow in English. Also called the Smoke Cascade, the falls are located in Bhedaghat, 30 km from Jabalpur in Madhya Pradesh. Besides the steamy visual of the falls, the major reason why tourists flock to this area is the Marble Rocks. The holy water of Narmada forms gorges as it passes through the glistening tall standing marble rocks making for a divine spectacle. There are boat-rides that take you through the gorges during full moon nights that give you the best view of the marbles. One can also get a picturesque view of the falls from a cable car that runs from the east to the west bank of Narmada. Dhuandhar Falls in Madhya Pradesh is one of the best destinations in India to enjoy the winter chills. Amidst the lush green covers of the Sahyadri Ranges lies the seasonal waterfall of Bhandardara – Umbrella Falls. Located under the Wilson Dam, these falls are fed by the monsoons and its allure is not due to its height, but the immense volume of water that flows. As for the name, the water when hits the rock below given an impression of a giant umbrella. Visitors can best observe the falls from the footbridge. One can also take a boat ride at Arthur Lake near the falls and if one waterfall isn’t enough, Randha Falls close to Umbrella Falls also make for a spectacular scene! Apart from this unique waterfalls, Maharashtra also has an equally unique village Shani Shingnapur which has no doors and locks. How to reach: Nearest Airport – Mumbai (Bhandardara is 163 kms from the airport). Nearest Railwa Station – Igatpuri (Bhandardara is 43 km from Igatpuri). The drive to Bhandaradara from Mumbai is also beautiful. It takes approximately 4 hours.

Unarguably southern India’s best, the Hogenakkal Falls on the Kaveri River are a mesmerizing sight. The Kaveri River forks out into multiple streams and falls on the unique rock arrangements giving a misty smokey look. The waterfall owes its appeal to the semi-circle formation of the rocks. The waterfalls in a circle and finally hits the small pool in the middle that is surrounded by some of the oldest carbonite rocks. Apart from the cascading white waters, South-Asia’s and the world’s oldest rocks, the coracles are a major attraction. Coracles are circular bamboo boats that can carry up to eight people at a time. Visitors are more thrilled to get a ride around the fall in this unique boat. Bangaloreans, Hogenakkal Falls is just 3 hours away from your city. A British officer once spotted a rock near the falls that resembled an elephant. The rock was destroyed in an earthquake, but the name still remains. One of the busiest spots in Shillong, the Elephant Falls can be viewed in three parts. Yes, you’ll see a different part of the falls from three different vantage points. The first part is comparatively broader and is tucked between dense trees, the second part gets narrower and finally the last one is the tallest of all and is clearly visible because of the contrasting whites on the dark rocks. This serene location is a paradise for tourists due to its easy accessibility and its short-distance from Shillong (12km). Yes, of course the splendour of the falls itself calls out to visitors! Shillong also has the gorgeous Krang Suri Waterfalls which is a must-visit spot. Have you seen anything like the Elephant Falls of Shillong? Source: mapsofindia.com

India’s second-highest waterfalls after Nohkalikai are the Jog Falls of Karnataka with an 830 feet long drop. The Sharavati River flowing through the Western Ghats magnificently splits into four channels, named – Raja, Rani, Roarer and Rocket. The tallest, out of the four is evidently ‘Raja Fall’ with the longest continuous plunge. Visitors can access the steps made by the tourism department at the bottom of the hill to get a clearer and a beautiful view of the Jog Falls. The dense green cover, the natural habitat of the region and the white thick smoke-like water enhances the beauty of the waterfall. Called the Niagara Falls of India, the Chitrakoot falls stand tall at the height of 29 meters. It is known to the widest waterfall of the country as it Kalahandi region of Odisha, enters Andhra Pradesh and finally flows into the Godavari River. Also known as Chitakote Falls, on the left bank of the fall, a Hindu shrine of Lord Shiva is located. This is one of the most beautiful waterfalls in India. And its also one of the best international travel experiences in India.

How to reach: The nearest airports are Allahabad ((135 kms from Chitrakoot), Khajuraho( 175 kms) and Varanasi (275 kms). By rail, the nearest station is Karvi (8km). You can also reach by state connected buses from Allahabad, Kanpur and Banda

So here is our list of some of the most beautiful waterfalls in India, that you must visit during the monsoon. India has all the natural wonders in the world you can possibly fathom, so why even travel abroad right?