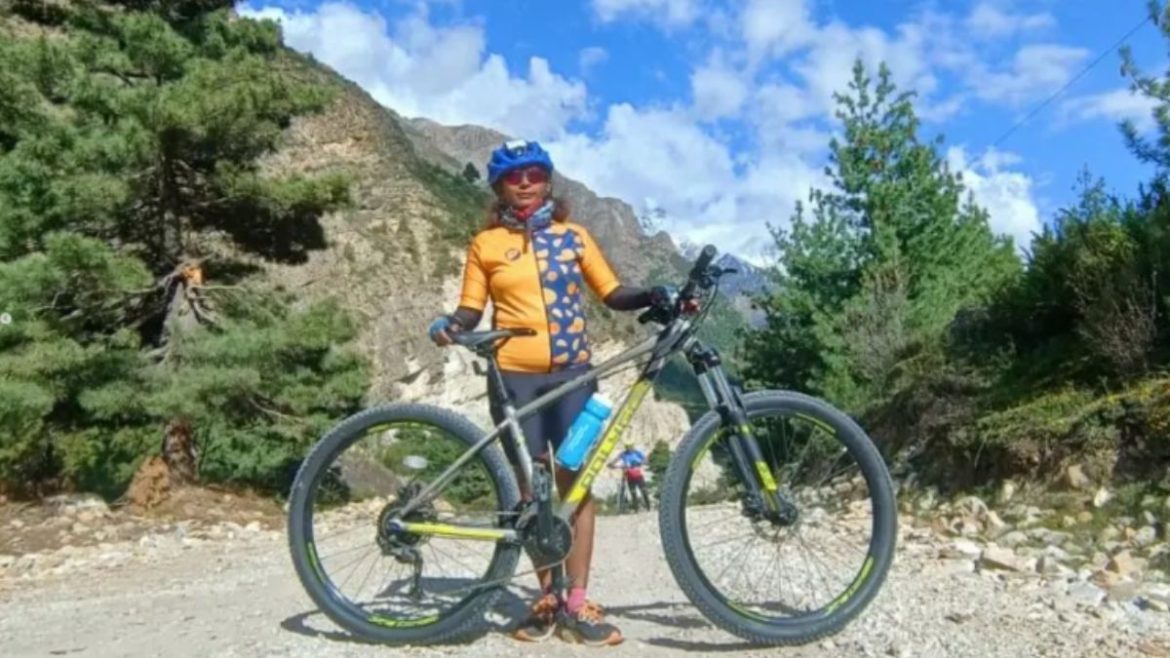 Indian women achieving incredible heights are no longer a matter of surprise. In fact, they are a given! Because someone rightly said that when a woman breaks stereotypes it shouldn’t surprise you, rather it should make you feel proud! And India is proud of Preeti Maske, a 45-year-old cyclist from Pune, who last month became the first woman to cycle from Leh to Manali in a stretch of 55 hours. Braveheart Preeti Maske covered the 430 km distance in a period of over two days. And no altitude sickness or weather change could stop her from doing so! Read on to know more about her incredible story of strength and resilience that made her a successful woman cyclist!

The Fastest Woman Cyclist And Her Humble Beginnings

Pune’s Preeti Maske revealed that her cycling journey began when in order to overcome illness, she started cycling at the age of 40.  A Better India report recently revealed that Preeti had developed a series of health problems — anaemia, hormonal imbalance, and PCOS. She always felt like she lacked energy and quotes her saying, “Whether it was my office work or at home, I lacked the stamina. I would feel tired. I couldn’t sleep well at night.” Looks like all of these led her to a path of success. And it’s truly inspiring to see Preeti her convert her weakness into her strength. According to the woman cyclist, age is no barrier to exploring one’s passion. Preeti believes that if she can overcome her fears, then any woman can. And we can’t agree more! Preeti Maske is currently the fastest woman cyclist on the Golden Quadrilateral comprising a distance of 6,000 kilometers. Speaking about the hassles she faced on her journey, Preeti said, “Managing sleep deprivation in a continuous and non-stop ride in a high altitude region was a big challenge for me. I had to take oxygen due to breathlessness at high passes twice during my adventurous journey”.

Pune’s Preeti Maske is breaking numerous stereotypes through her cycling achievements. She is a mother of two but that didn’t stop her from fulfilling her dreams. Recently she created a Guinness World record by becoming the first woman to cycle solo from Leh to Manali in 55 hours and 13 minutes. Preeti also holds the record for the fastest woman cyclist on the Golden Quadrilateral comprising a distance of 6,000 kilometers. But after completing that in 2021, Preeti was up for more difficult challenges. And that’s when she learnt from a friend about the possibility of an ultra-cycling record from Leh to Manali. And that was how she went on to set a new Guinness World record. The woman cyclist revealed to The Better India that she had to undergo rigourous training to prepare for the Leh-Manali route. Must say, the hardwork paid off really well! Preeti’s win was celebrated all over India and especially by the BROIndia officials. On July 26, 2022, the official BROIndia handle had tweeted:

“Congratulations Ms Preeti Maske- Its a Guinness Record. 55 hours & 13 minutes, is all she needed to cycle from Leh to Manali, approx 430 km. The ultra cycling effort in High Altitude terrain with reduced Oxygen availability speaks volumes of her tenacity and determination.” Truly, a proud moment for India!

55 hours & 13 minutes, is all she needed to cycle from Leh to Manali, approx 430 km. The ultra cycling effort in High Altitude terrain with reduced Oxygen availability speaks volumes of her tenacity and determination. pic.twitter.com/tGDjzKcAhm

Also read: Breaking Stereotypes, This Girl In The 20s Became The Youngest Woman To Visit Every Country In The World