This Dog’s Reaction To The…
Mumbaikars, You Have To Now…
Abu Dhabi’s Budget Airlines Introduces…
Dubai To London Gets Another… Are you a doggo person with a wanderlust soul? Then this cutesy cocker spaniel waking up to the host of hot air balloons will have your heart for sure. Four-legged Izmir Sultan dwells in the luxury cave resort, Artemis Caves Suites of Turkey and has already taken the Instagram by wonder with his aww-dorable pictures on the terrace of the retreat. The furry kiddo jumps, runs and lounges on the terrace, resting his eyes upon dozens of hot air balloons hovering on the orange skyline.

Pawsome Reactions With A Stunning View

Artemis Caves Suites is a swanky leisure retreat with cave-shaped rooms in the rugged region of Goreme, Cappadocia in Turkey. The hot air balloons floating over the tall, cone-shaped rocks of Cappadocia is a sight to behold. The hotel takes its guests on a tour above the rocks on these hot air balloons. And good boy, Izmir enjoys the splendid sight of these balloons every day. The champ has been melting thousands of hearts with his pawsome reactions. No wonder, Izmer has got 14.9K followers on Instagram. Outside India, he is a Tiktok star too and features in most of the hotel’s Tiktok videos. Izmer is mostly seen on the hotel terrace and he witnesses the sky full of balloons, changing colours over the breathtaking town. He is also a gastronome too and enjoys gourmand dishes. Also, a couple stranded in Thailand amid lockdown had fostered 10 dogs.

Also Read: A Tiny Dog Travels 10,000 Miles To Reunite With Her Owners

Thanks to the arid climate and spectacular rocky views, Cappadocia is one of the most gorgeous destinations in the world. The massive cone-shaped rocks have been formed by the lavas deposited by volcanoes that were active about 2 million years ago. The magnificent rock formations in the region draw tourists from all over the world and the locals have cut out hotels and walkways from the formations to earn a living. Cappadocia is nothing short of a piece of art and the lucky guy, Izmer lives in a true paradise. 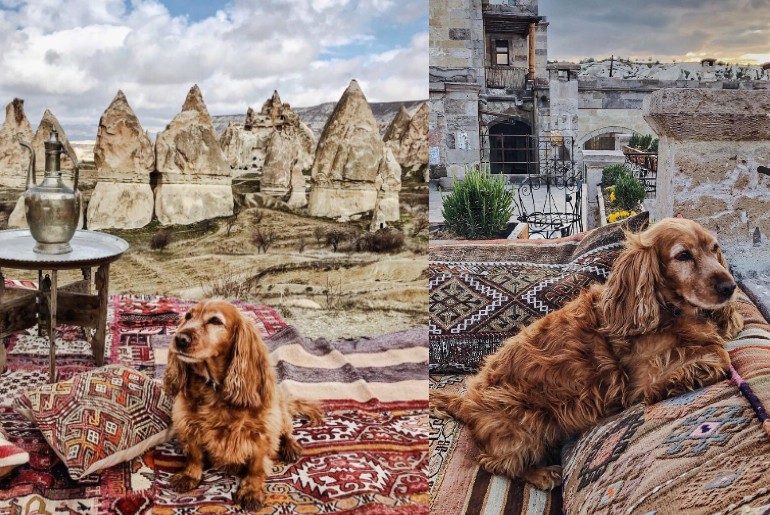 Also Read: Ratan Tata Has A Dog Named Goa &  Here’s The Interesting Story Behind The Name

So, the next time you’re at Turkey, save up some bucks to spend some quality time with this furry friend in the cave hotel maybe? Meanwhile, did you ever go on a country tour with your pet? Here’s the story of an epic journey of a couple with their two dogs, Frodo and Cruise: