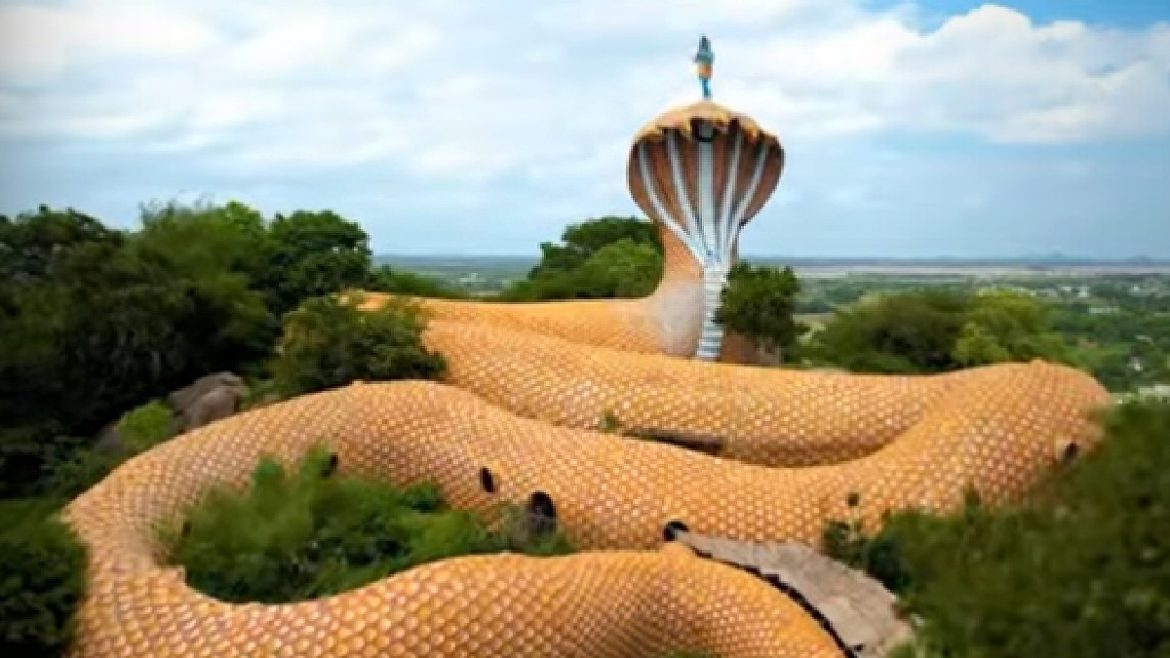 Not far from the Nampally bus stop, lies a magnificent temple that is shaped like a gigantic orange snake. The temple lies amid the lush green hills of Telangana and falls on the path leading to the hilltop shrine, the Lakshmi Narasimha Swamy Temple. The Lakshmi Narasimha Swamy Temple is within a walking distance of around 15 minutes from the Vemulawada – Karimnagar highway. On the head of the snake temple, there is a statue of Lord Krishna. The temple would remind one of the tale of Lord Krishna dancing on the head of the demon serpent Kaliya. This shrine is at a distance of around 150 kilometres from Hyderabad.

One Can Enter The Temple Through The Abdomen Of The Snake

Interestingly, the entry to the temple is through the abdomen of the snake. The snake sits in a curled-up position and visitors can walk through the serpentine tunnel with statues of mythological figures on both sides. The story of Prahalada and Hiranyakasipu is depicted through the statues. At the edge of the tunnel, lies the life-like statue of Lord Narasimha killing the king of demons, Hiranyakasipu. Deities of Naga Devatha are also present inside the shrine. Near the entrance of the temple, lies an idol of Lord Narasimha.

Get A Panoramic View Of The Vemulawada Town From The Hilltop

The view of the snake temple looks spectacular from the hillock of the Lakshmi Narasimha Swamy Temple. The hilltop offers a panoramic view of the Vemulawada town with the snake temple lying in between, surrounded by a vastness of intense greenery, the riverbed of the Godavari and the rolling hills. The view is nothing short of spellbinding. The Lord Lakshmi Narasimha Temple is attached to a rock and it is dedicated to Lord Vishnu.

One the path to the Narasimha temple, there is a temple for Naga Devatha. The temple was worked in a model of Snake. Guests can enter the holy place through the snake's midsection – a long, winding passage.#LakshmiNarasimha

Also Read: World’s Finest Tourism Village Is In Telangana & Here’s Why It Is A Must Visit!

The temple premises remain open for visitors from 9 AM to 5:30 PM. The shrines are a must-visit to experience spirituality with amazing views. On that note, This Hidden Village With Lakes And Waterfalls Is A Charming Getaway Near Hyderabad.