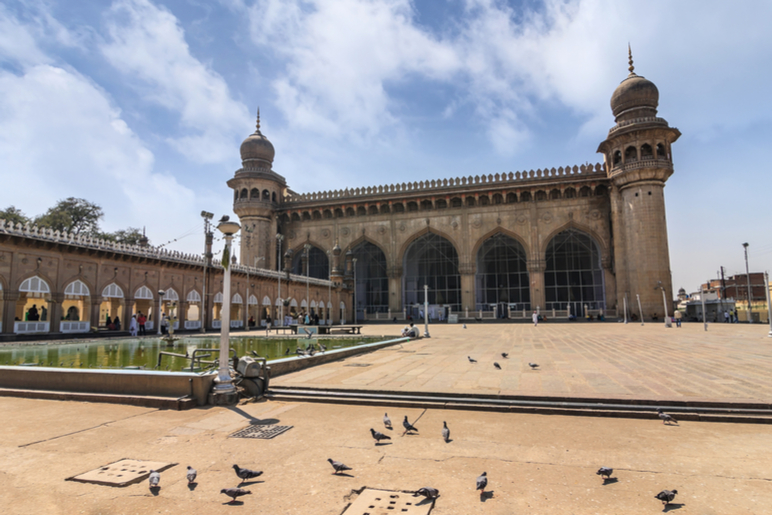 Take a sneak peek inside one of the world’s largest mosques, Mecca Masjid in Hyderabad is also one of the oldest buildings.

Known to be one of the world’s largest mosques, it hosts over 10,000 men who come down here to pray at major Muslim festivals. As it is also Hyderabad’s one of the oldest buildings, it was founded in 1617 by the city’s founder, Mohammed Quli Qutb Shah.

Also read: Experience The Charm Of This Spanish Mosque In Hyderabad The central arch above the prayer hall is made out of the soil from Mecca, hence the name Mecca Masjid penetrates in the city of Hyderabad. The mosque also has tombs of several Hyderabad Nizams in its courtyard that is glinting under the scorching sun and leaves a breathtaking sight.

The ancient hall of the biggest mosque in Hyderabad can hold up to 10,000 worshippers who come here to pray at major Muslim festivals. Be spellbound by the intricate work of architecture and the patterned walls of the mosque. You’ll find verses of the Holy Quran inscribed on the arches of Mecca Masjid.

There are 15 intricately designed arches that support the roof of the main hall, and the mosque is adorned with Belgian crystal chandeliers. Visit here as one of the top things to do in Hyderabad and experience the charm of the city at this mosque.

Also read: A Temple Near Hyderabad Is Known To Grant US Visas To Its Devotees