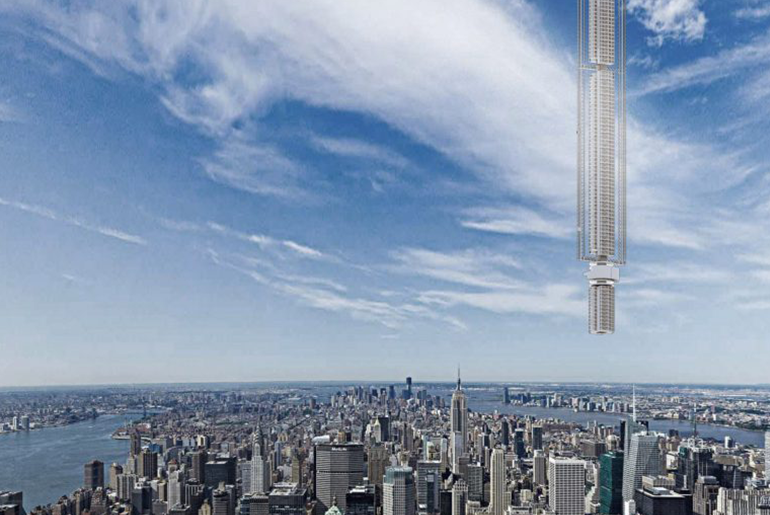 A hi-rise like you can’t imagine! Analemma Tower will be built sky down. If that’s not enough, it will also be the world’s largest skyscraper ever!

We’re wondering that ourselves! Clouds Architecture Office – a New York based firm has conceived a masterful plan that involves building a skyscraper. This building won’t be ground up but sky down. Analemma Tower will be suspended 31,068 miles above the Earth from an orbiting asteroid . Like everything opulent, the firm says it plans to build the tower in Dubai – which is incidentally also home to the Burj Khalifa. Analemma Tower will be suspended in air by cables from an asteroid repositioned into geosynchronous Earth orbit. The fanciful tower will orbit daily in a figure eight pattern between the northern and southern hemispheres. We don’t know what is, if that isn’t called a room with a view.

The building will be powered by solar panels; water will be collected through cloud condensation. If you’re up in the clouds, you might as well make best use of your resources. The tower in itself will be self-contained with everything from business, dining, worship, entertainment and even shopping! A Drawing of the Working of Analemma

How Do I Get Back To Earth?

Umm, you take a parachute 50.000 kms down to solid land. Each orbital cycle of Analemma Tower will last 24 hours. The start and end point will be New York City. Visitors would need special protective suits for this trip.

When Will It Go Live?

The company hasn’t offered a date, but they are on the lookout for the perfect size asteroid to hold up this structure. Incidentally, Clouds Architecture Office is also the mastermind behind space transportation and a 3-D printer ice house on Mars.