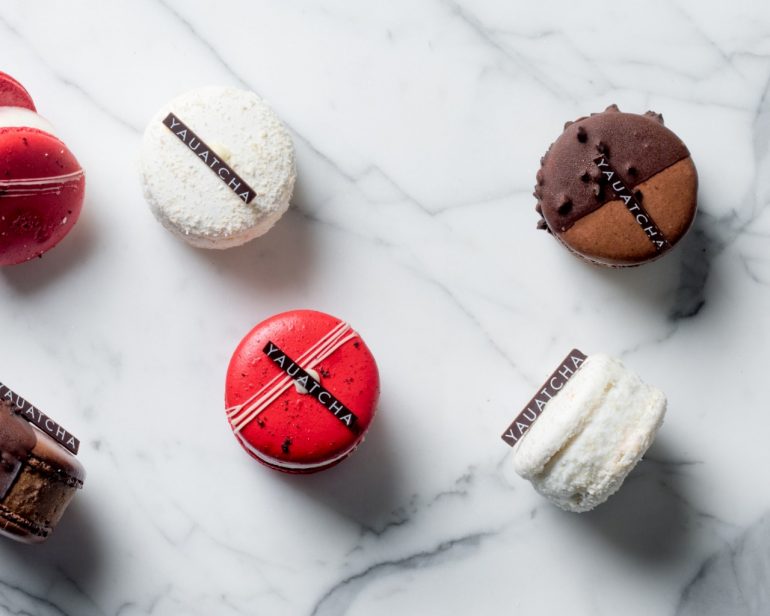 In a celebration of both Eastern and Western desserts, the Patisserie teams at Yauatcha India have created a collection of patisserie inspired by classical pastry techniques and Chinese ingredients and flavours. Launching during the festive season, the latest addition to the collection is a range of ice cream macarons. The exclusive selection of three new ice cream macarons takes inspiration from Yauatcha’s Cantonese heritage along with the influence of a signature dessert, the Raspberry delice in the Raspberry ice cream macaron. The second flavour is the Soy Caramel, a pairing of bitter dark chocolate with salty soy caramel and the third, Coconut. The ice cream macarons are a modern take on the classic nostalgic childhood treat of ice cream sandwiches. What Are The Flavours?

The macaron shell is dusted with coconut powder. In between the shells is a coconut lime sorbet that is made using fresh coconut puree, lime zest and freshly squeezed lime juice.

With inspiration taken from the Yauatcha petit gateau, Toasted rice, the macaron shell for the Chocolate soy caramel is dipped in cocoa nib chocolate which gives it an added texture. The ice cream is a soy caramel chocolate ice cream which is made using fragrant vanilla pods, dark soy sauce and cream. Inspired by the signature Raspberry delice, this macaron’s red shell is dusted with raspberry powder. In between it is filled with lychee raspberry ice cream which is prepared using lychee puree and a flavourful raspberry reduction.