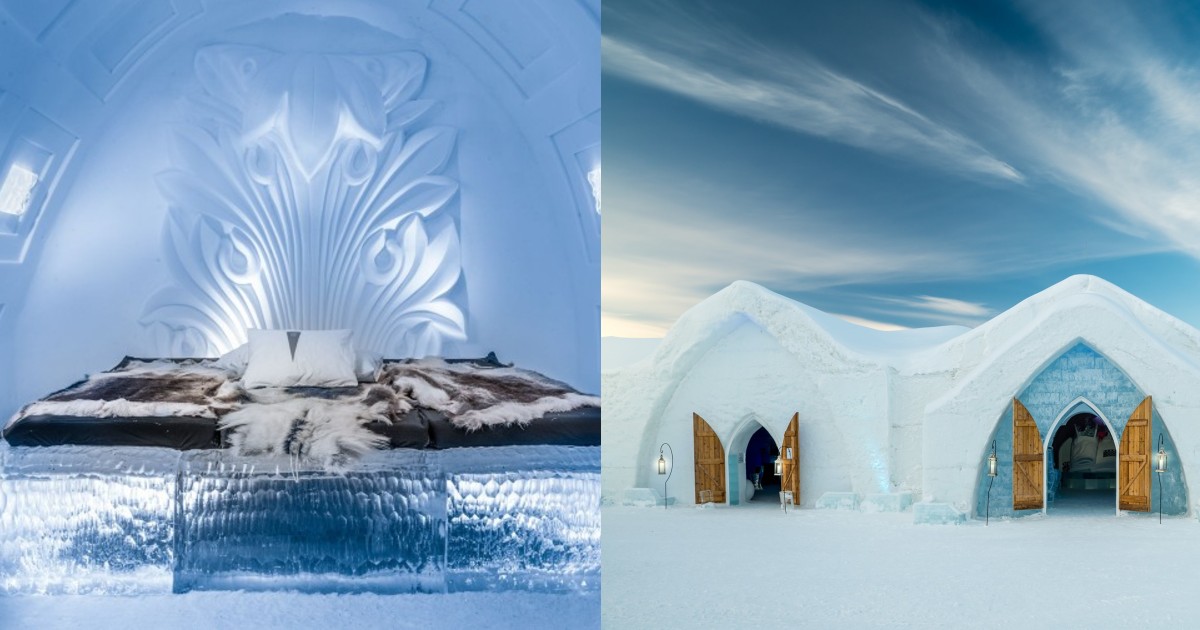 Ice hotels are truly magical in nature. From jaw-dropping ice sculptures, cosy igloos, beds and dining tables made entirely out of ice, it’s nothing less than living in Disney’s Frozen world. Snow hotels are quite mysterious in nature, given how many melt during the summer seasons and then again rebuilt, year after year. To pique your interest, here are 5 of the most beautiful ice hotels in the world. They have igloo suites, ice sculpture beds and more for a snowy winter wonderland experience. So, let it snow!

Planning to elope for a winter wedding? This ice hotel in Norway comes with its own icy chapel! Norway’s Sorrisniva builds a new ice hotel, every year since 1999. Sorrisniva Igloo Hotel is Europe’s largest and the world’s northernmost ice hotel. This ice-cold property boasts 26 bedrooms and 4 decorated suites with large beds, plenty of blankets, pillows and sleeping bags for a cosy night’s sleep. Every year, the hotel has a distinct theme with ice sculptures and carvings etched into the walls for an immersive experience for visitors. There’s an ice bar, an ice chapel and lots of artwork. Visitors can nestle in one of the igloo’s decorated ice rooms or sleep under the stars in a lavvo. It’s a teepee like tent of the Sapmi people of Norway 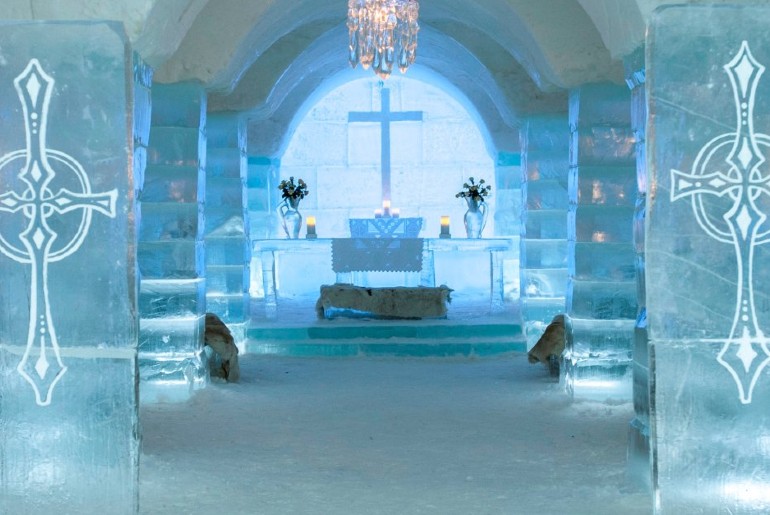 Also Read: I Stayed In An Igloo In The Himalayas With My Dogs & Had The Best Trip In The Mountains

2. Hotel of Ice In Romania

Perched high up in the snow-covered mountains of Romania, Hotel of Ice offers luxury suites and an outdoor adventure park. Think snow rafts, skiing, skating, climbing and riding snowmobiles. It’s truly an adventurous winter wonderland. This ice hotel is rebuilt every year out of snow. Ice blocks are extracted from the largest glacial lake of the Fagaras Mountains, to build the ice hotel. You can enjoy the stunning views of the Fagaras Mountains that surround the property. The ice hotels have rooms that are of course built of ice and the walls are hand-carved by ice artists. Feast on ancient Transylvanian recipes at the in-house ice restaurant and bar. Sounds cool right? 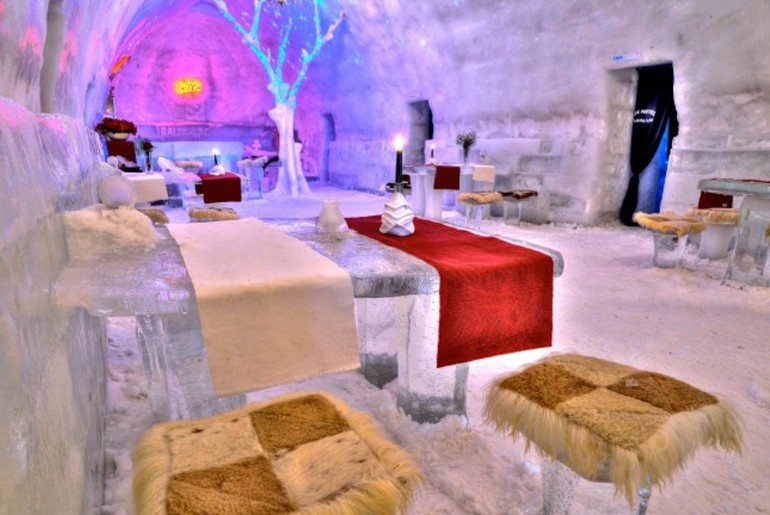 Also Read: Stay In A Game Of Thrones Themed Igloo In Manali & Eat In An Ice Box

Finland’s gigantic SnowCastle is built entirely out of snow and ice, both frozen from seawater. Situated by the frozen sea near Kemi city centre, this castle offers an Arctic adventure for adventure junkies from January till mid-April. It houses the world’s largest snow restaurant that seats around 200 guests around its glistening ice tables. Guests can stay at 21 beautifully adorned snow rooms. The room is equipped with a comedy bed covered with warm lambskin, fleece sheet and a sleeping bag perfect for Arctic conditions. For wedding and other events, there’s a special snow chapel with a mesmerising atmosphere that will take your breath away. 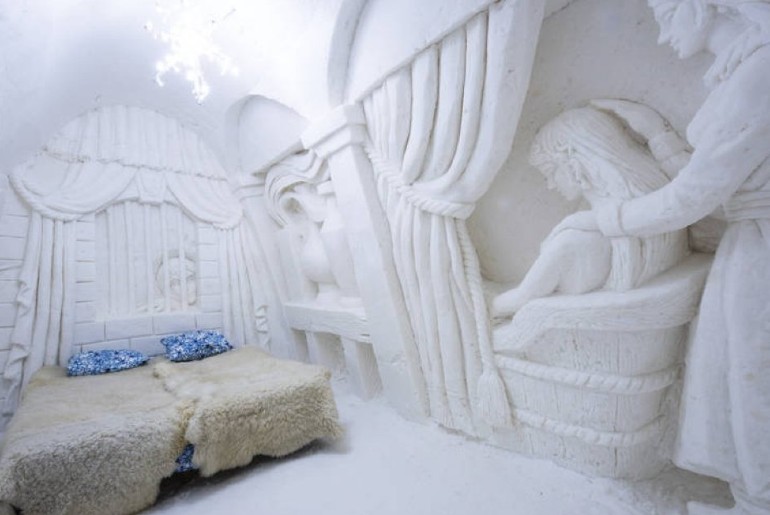 Hôtel de Glace in Québec City is a must-see attraction in Canada. This ice hotel has seduced over a million people across the world with its spell-binding decor and unique styles since its opening in 2001. Modelled after Sweden’s original ice hotel, this ice attraction is built entirely out of snow and ice. It offers an unforgettable experience in North America. Visitors can sip a refreshing cocktail served in a glass made of ice or spend one night in the 44 theme rooms. For more relaxation, there’s an outdoor hot tub and sauna providing beautiful views. 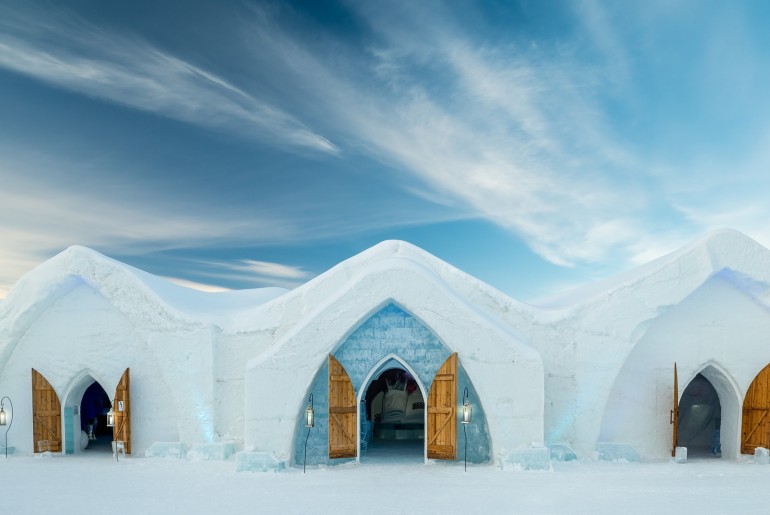 Icehotel in Sweden is the world’s first and largest hotel built of snow and ice. It’s one of the most popular ice hotels in the world. Sweden’s Icehotel is extra special thanks to the fact that it’s part hotel, part ice and snow art installation. There are constantly changing curated exhibits welcoming guests. Guests can rest in rooms adorned with ice art or nestle in traditional hotel suites. For an authentic ice hotel experience, limited-time igloo rooms, before they melt are quite interesting. The rooms have ice blocks for beds, which are covered in reindeer skins. The in-house restaurant serves food on ice-cube plates. Icehotel Sweden is built from the frozen water of the Torne River. 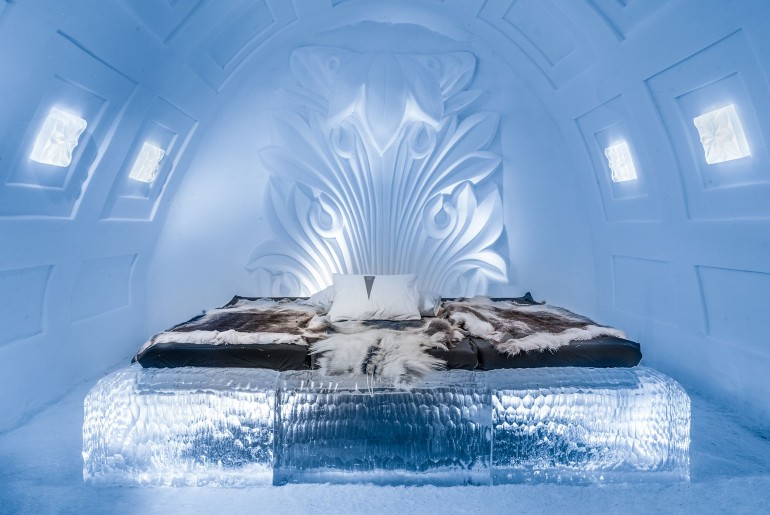 If you’re the kind who prefers mountains over beaches, then a once-in-a-lifetime stay at an ice hotel must make it to your bucket list. These are some of the best ice hotels in the world that give you the full-blown winter wonderland experience.