Air India Express Flight From Dubai Skids Splits In Two At Kozhikode, 18 Dead Including Both Pilots

An Air India Express flight part of Vande Bharat Mission from Dubai to Kozhikode with over 180 passengers on board skid off the runway and crashed while landing at Kozhikode in Kerala. So far, 18 deaths have been reported, and more than 100 passengers are feared to be injured. The Air India flight was about to land when this accident took place. Heavy rainfall and wet runway at the Kozhikkode airport might be the reason for aircraft skid.

Dubai-Kozhikode flight X1344, a Boeing 737, had around 184 passengers on board. It landed at around 7:41 pm at Kozhikode airport. Airline sources suggest that it appeared to overshoot the runway. The Air India Express flight skid off the runway and split into two while landing. According to news agency PTI, 18 deaths have been recorded so far, including both the pilots. 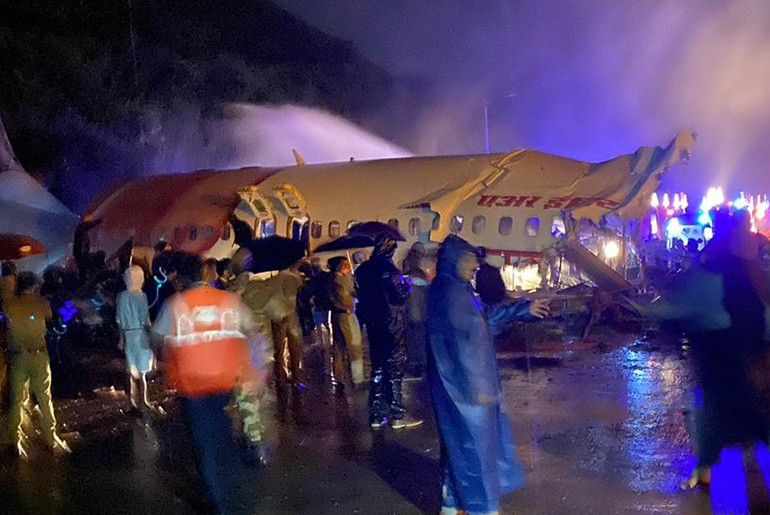 Also Read: Expat In Dubai Pays AED 68,000 For Flight Of 61 Indians In Memory Of Late Son

Kozhikode’s Karipur Airport is a tabletop airport like the one in Mangaluru. Air India Express said in a statement  “The Air India flight (IX-1344) from Dubai carrying 174 passengers skidded during landing at Karipur Airport in Kozhikode (Kerala) today. There were six crew members on board, including two pilots”.

Media reports that many passengers have been admitted to the hospital with injuries. But luckily the plane didn’t catch fire. The Air India Express plane reportedly fell into a 30 feet deep gorge while landing at the Kozhikode. airport. The Directorate General of Civil Aviation (DGCA) informed the media that the plane landed in heavy rain and after landing at the Runway 10 continued running till the end of the runway.  It then fell down the valley and broke into two. At least 24 ambulances and fire tenders rushed to the Kozhikode airport. This flight was part of the Vande Bharat Mission.

MEA Launches 24*7 Helplines For Those Affected

We are deeply saddened by the tragedy of Air India Express Flight No IX 1344 at Kozhikode.