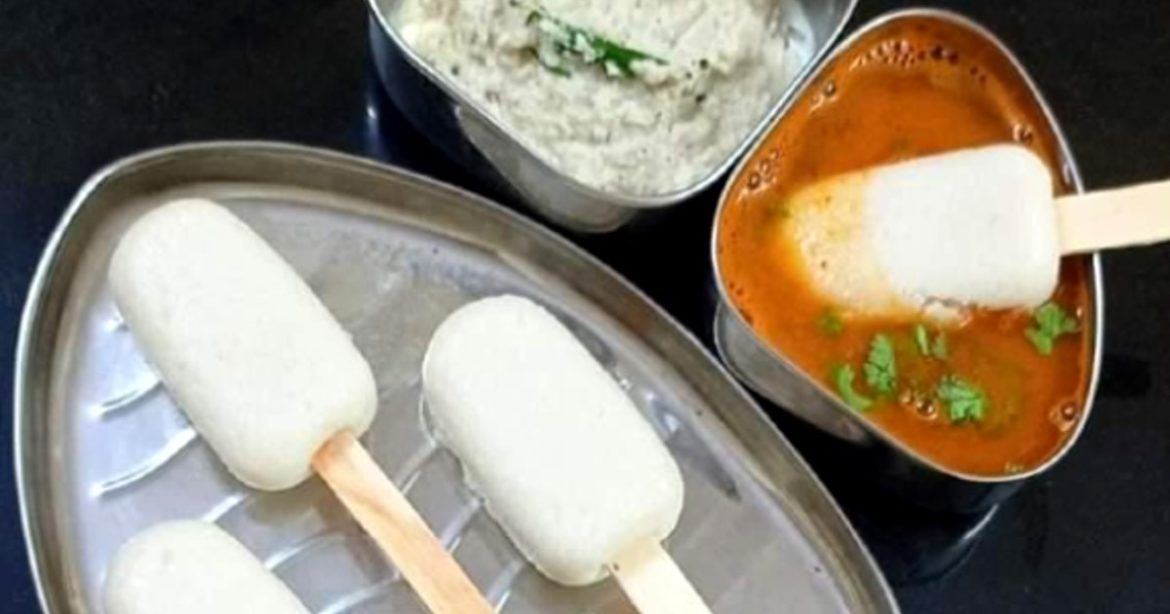 Idlis, the delicious South Indian snack prepared from fermented black lentils and dal, steamed to its soft, pillowy form, is considered to be one of the healthiest, best breakfast foods in the world. Pair idlis with aromatic sambhar and soothing chutney, and you’d know what heaven tastes like. While idlis are super tasty, we must agree that it can get a bit messy, when we dunk it in hot sambhar. While some say that’s the fun of eating it, others crave to find a less messy alternative. Well, a Bangalore restaurant has heard your demands and given the good ol’ idli a playful twist. Read on to know it.

A Twitter user, BrotherToGod shared a unique photo of idlis on the microblogging platform, In the photo, a Bangalore restaurant is serving idli on an ice cream stick. Three idlis on sticks resembling popsicles are placed on a plate. And another idli on a stick is dunked in sambhar. There’s also a bowl of coconut chutney placed on the side. This bizarre food trend has gone viral on social media. This convenient, fun and hassle-free way of eating idlis has left foodies amused. Kids would probably be delighted to have idlis looking like vanilla ice cream on a stick.

Innovative food technology of how the Idli got attached to the Ice cream stick.
Bengaluru and it's food innovations are always synonymous!@vishalk82 pic.twitter.com/IpWXXu84XV

Also Read: 5 Kinds Of Iconic Idlis You Need To Try Out In South India

Netizens Have Mixed Views On This Food Innovation

While this viral picture took over social media, some absolutely adored the food innovation, while others condemned it. The picture grabbed eyeballs.  The name of the Bangalore restaurant serving this snack still remains a mystery. But here’s what netizens had to say. One user said that Bangalore is synonymous with food innovations. Others hailed the food as creative and called it a nice idea. But there were some who brought notice of ice cream sticks being unnecessarily wasted for a gimmick. Well, we’ll leave you to decide if it’s a good idea or not. Meanwhile, check out another Bangalore innovation, Eat Raja.