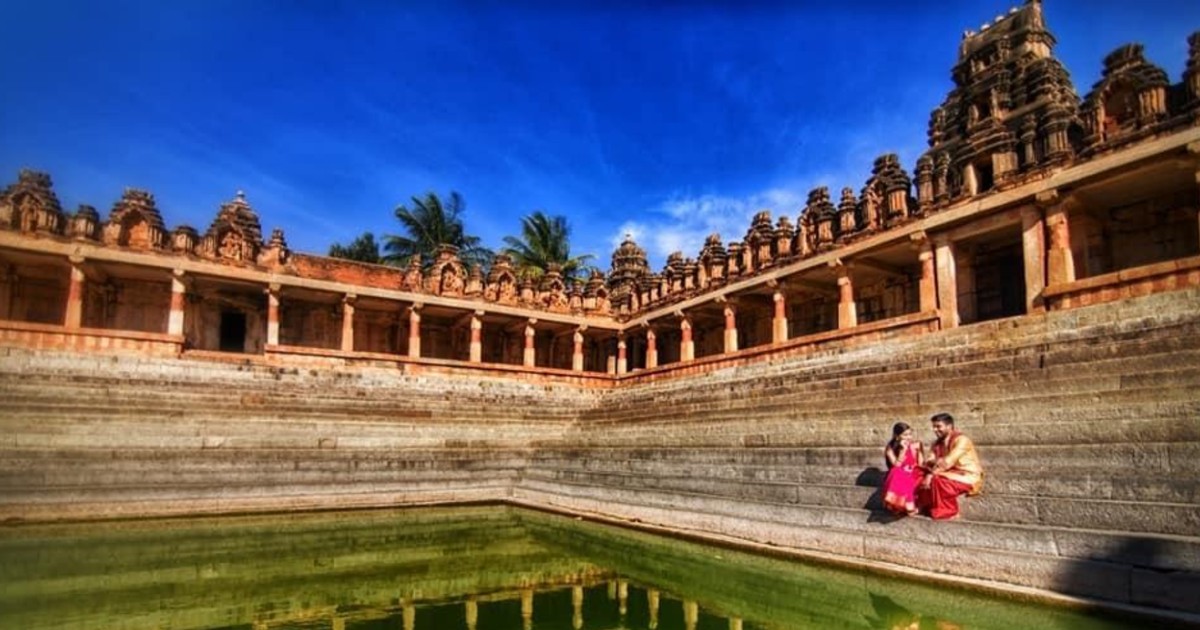 It’s truly a divine feeling to sit in a quiet old temple complex, witness the magnificence of the diety, hear the temple bells ringing and inhale the fragrance of fresh flowers. Every temple has a different story to tell through its majestic deity, intricate architecture and elaborate customs. And when you’re in the Garden City, you truly want to experience it all, the metropolitan culture and the divinity of beautiful temples. So Bangaloreans! We have here a list of the 5 most beautiful temples in Bangalore that you must visit. So read on to get enthralled.

Did you know, renowned author RK Narayan came up with the name of the fictitious city, Malgudi by combining the two of the oldest areas of Bangalore- Malleshwaram and Basavanagudi? If this excites you then you must visit Dodda Basavana Gudi or the Nandi Temple in Bangalore. This is one of the oldest and most spectacular temples in the city. Built-in 1537 by the founder of Bangalore, Kempegowda this temple houses a mammoth 4.5 m high and 6.5 m long statue of Nandi Bull, carved out of a single stone. Legend goes that a wild bull used to destroy groundnuts and peanuts cultivated in this region. So a statue of bull was instructed and a Basavana Gudi or the Nandi Temple was created to appease Lord Shiva. Till date, the temple hosts the famous ‘Kadalekai Parishe’ (Groundnut Fair) where farmers from all over South India offer their first groundnut crop of the year to Nandi. 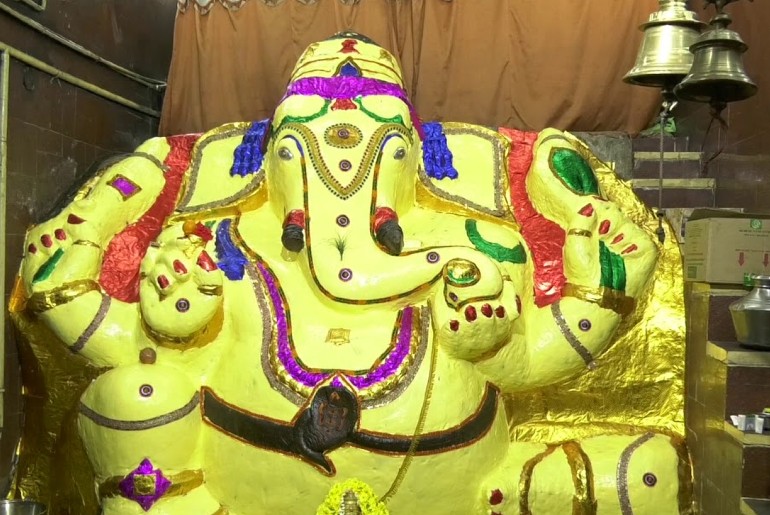 After you visit this Bull Temple, the same temple complex also has the Dodda Ganesha Temple. A huge Ganesha statue stands tall here at around 18 feet in height and 16 feet in width. The idol is also carved out of a single stone and is popularly known as Shakthi Ganapati or Satya Ganapati. The highlight of this temple is that the idol is adorned with different decoration each day. On one of these days, the majestic Ganesha idol is covered in 100 kgs of butter. It’s truly a sight to behold to witness a massive ancient statue of Lord Ganesha and Nandi in one temple complex in one of the oldest areas of Bangalore. 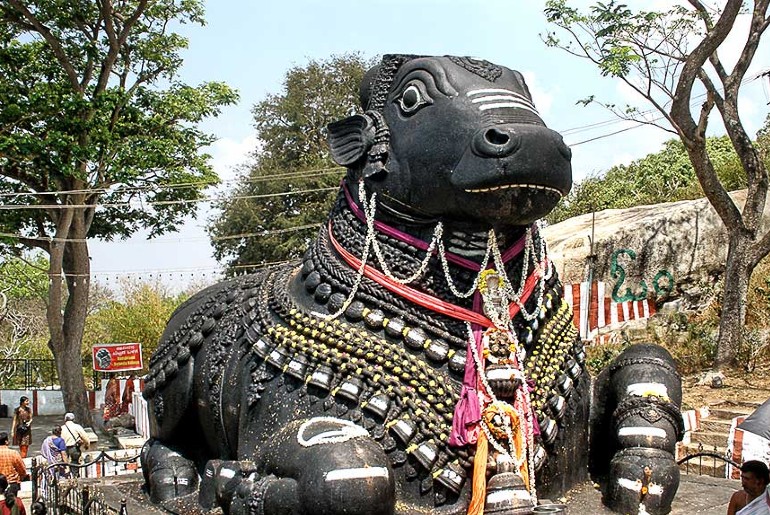 The next time you plan to go to Bangalore airport, start a little earlier and visit the Chokkanathaswamy temple situated nearby. This houses one of the oldest religious structures in Bangalore. Built in the 10th century by the Cholas, the Chokkanathaswamy temple is dedicated to Lord Vishnu. It’s constructed in an intricate manner with true Chola style architecture. The pillars are filled with Tamil inscriptions. 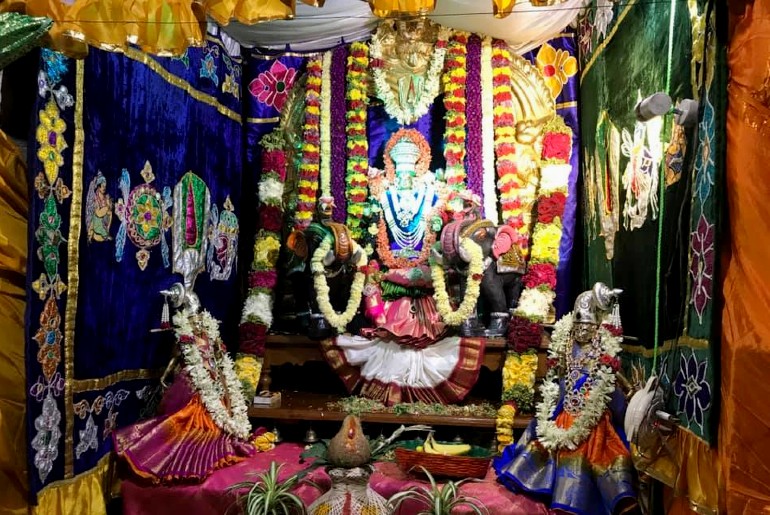 When you visit this temple, the large pillars and beautifully sculpted statues will truly take your breath away. One of the temple pillars also has Lord Vishnu’s dashavatharas etched on it. Legends has it that devotees who visit this temple witness pranic energy flowing through their bodies as their pray. But to witness this for yourself, you’d have to visit here at least once in your lifetime.

Sri Dakshinamukha Nandi Tirtha Kalyani Kshetra is a beautiful 400-year old temple believed to be discovered in 1997. As per history, the temple was left unused and eventually buried. Two decades back as the city of Bangalore grew and Malleshwaram became one of the preferred residential areas, the demand for properties also increased. During this time, people evacuated the land only to discover a gorgeous temple buried underneath. This is 400-year old Lord Shiva temple situated bang in the middle of a busy Malleshwaram street. 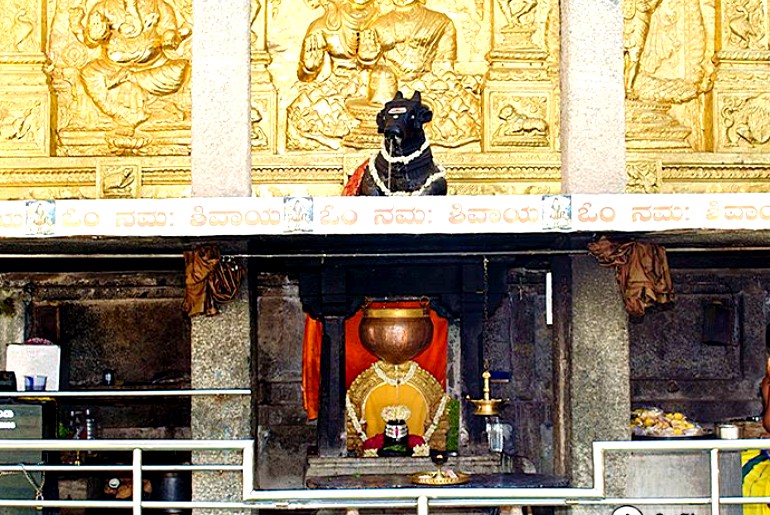 Once you enter this shrine you will interestingly find a Nandi at your eye level, and a charging little pond in the centre filled with fishes and turtles. The main shrine is placed right below Nandi. There is also a water source emerging from Nandi’s mouth which continuously falls on the Lord Shiva deity. Walk down the flight of stairs and then you can reach the shrine. The main deity is located below the ground level and the other shrines are places at different locations. It’s one of the most interestingly constructed temples in Bangalore.

If you want to experience a slice of Hampi in Bangalore, all you got to do is visit Bhoga Nandeeshwara Temple. This 1000-year-old temple is magnificence carved in any stone. It’s a perfect example of Dravidian Architecture. And it bears the architectural stamps of around five different dynasties that ruled here. And each dynasty be it the Ganga dynasty, Cholas, Hoysalas, Pallavas and finally, the Vijayanagara kings added their charm to this temple. It truly houses history and beauty worth centuries. 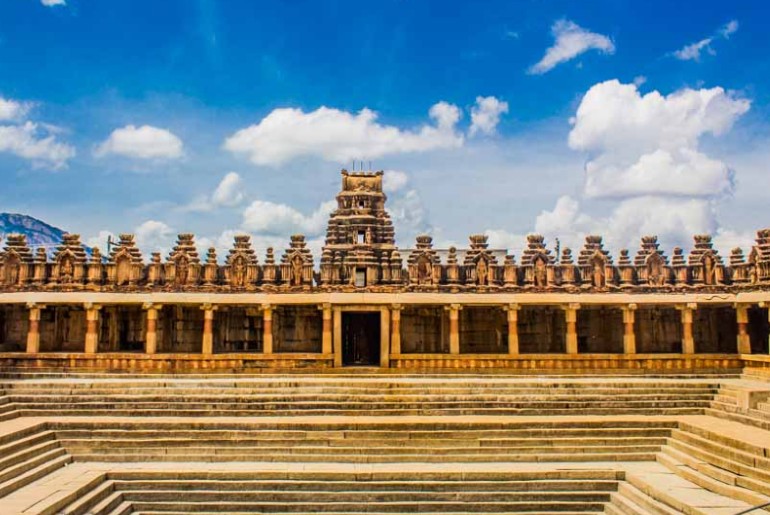 Bhoga Nandeeshwara temple situated near Nandi Hills is dedicated to Lord Shiva and Goddess Parvati. It’s an expansive temple complex which will take you at least 1.5 hours to explore. But the beauty and spirituality here will just not leave you satisfied. One of the absolute marvels here is the intricately built “Shringi Thirtha” or holy tank. You can sit on the steps here and witness the calm and still water in the tank. Bhoga Nandeeshwara Temple is a divine spot for couples to get married or even capture pre-wedding photographs. If you haven’t visited Bhoga Nandeeshwara Temple, then you haven’t visited one of the most breathtaking places in Bangalore.

Bang in the middle of JP Nagar 2nd phase lies a relatively new yet beautiful temple named Sree Tirumalagiri Lakshmi Venkateshwara Swamy Temple. The temple deity here closely resembles the famous deity Tirupathi Balaji temple. It also has a massive statue of Lord Vishnu in his Ananthashayana ( resting) position. If you visit here at night, the puja is truly extraordinary. Witness a blissful experience of aarti taking place in the dark as you witness the magnificence of the Lord in the dark with just the brightness of the diyas lit around you and temple bells reverberating with divinity.

Also Read: My 3-Day Budget Trip Itinerary To Hampi With Friends Under ₹15000 Per Head 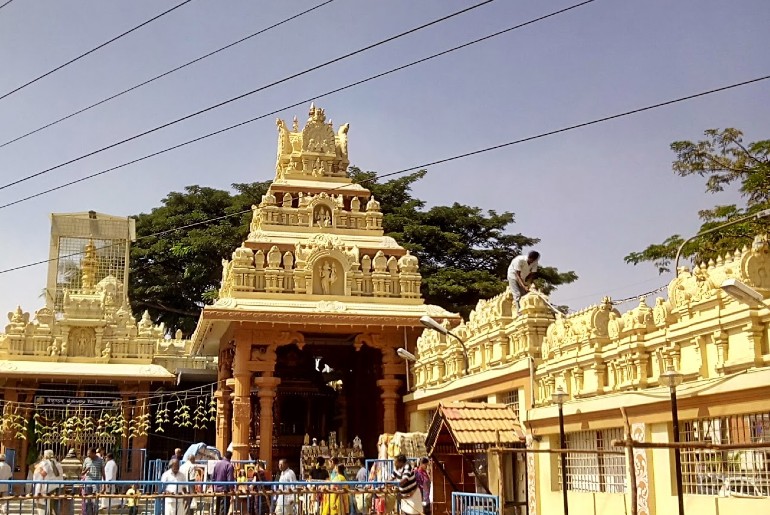 So these are some of the most beautiful temples in Bangalore that you must visit at least once in your lifetime. And if you’re a history buff, then do take a virtual tour of Hampi through this video.