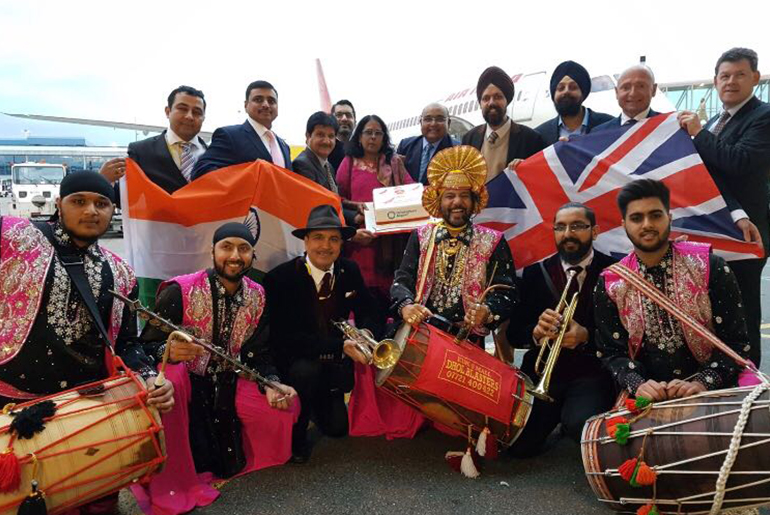 In-flight entertainment takes a whole new level. The very first flight from Amritsar to Birmingham had bhangra & dhol players performing before the take off!

Flying from Amritsar to Birmingham in the very first non-stop flight can be very exciting for the passengers, thanks to the substantial Punjabi population in Birmingham. That’s why the passengers from Amritsar to Birmingham decided to celebrate by special Bhangra dance offs and dhol performances within the flight. This was followed by an performance by professionals inside the flight. The first flight took off on 20th February, and the terminal came alive with Indian drummers and dancers. The passengers also joined in for the celebration to make it a wonderful day! Along with performers and passengers, Members of Parliament, business leaders and members of the Sikh UK community also joined in.

Air India will fly between Birmingham and Amritsar twice-a-week on Tuesday and Thursday with a Boeing 787 aircraft. According to an Air India official, the airline is the only one to offer direct flights between Punjab and the United Kingdom.

Also read: This Aeroplane Gurudwara In Jalandhar May Just Be Your Ticket To Hollywood!

The group Dhol Blasters uploaded the video on the next day on Facebook and it has already got over 30,000 views. The comments are extremely pleasing with people saying ‘Now that’s my kind of inflight entertainment’, ‘Absolutely brilliant! l was dancing while watching it’ and many more.