Gurugram Woman Has 3.5Cr House But Sells Kulchas On Road

Urvashi Yadav, a Nursery School teacher has set up a Chole Kulche stall in Gurugram after her husband met with an accident.

After her husband met with an accident, the doctors advised a hip replacement surgery for him, Urvashi took up the family’s financial responsibility on herself by setting up a Chole Kulche stall near her residence in Gurugram. The family wasn’t going through a financial crunch since Urvashi’s husband was an executive at a leading construction company and her father in law is a retired Indian Air Force Wing Commander. But Urvashi knew if she didn’t take action at that time, the future would be bleak for her family.

Urvashi acted quick and left her job as a school teacher and 15 days later, set up stall at the Sector 14 market. Initially, she made ₹2500-₹3000 per day selling Chole Kulche and Parathas. Urvashi lives in a 300 sq yard plot with her family in Gurugram and her 2 kids attending prestigious schools in Delhi NCR. Despite all this, Urvashi had to struggle to set up a business that didn’t work well with the status of the family. Her family owns 2 SUVs and lives in an air-conditioned home, so selling food on the road was slightly unusual for everyone. But Urvashi loved cooking, and to support her family, she decided to go ahead with it. Soon, people in the area started noticing her stall and she started appearing on people’s news feeds that made her stall even more popular. 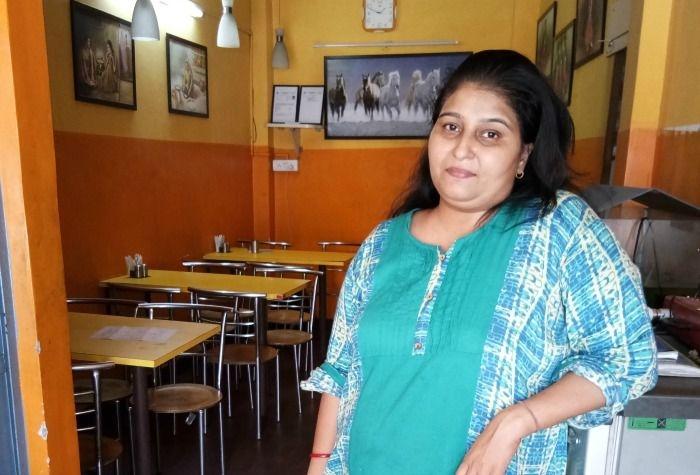 This story is from 2 years ago in May 2016. Urvashi’s husband’s first accident occurred in 2010 and the second in 2016, after which his chances of walking were slim. But Urvashi held it together for her family, and now her business is flourishing. Her Chole Kulche stall is called as Urvashi’s Food Joint now and it’s not just a stall, it’s a proper food truck. This Gurugram-based mom is sure ruling the food business!