Are you inclined towards those places that can totally unplug you from the chaos of the cities and grip you into an envelope of unadulterated serenity? There’s one beach, around 5 hours drive from Kolkata, that perfectly fits into this definition. While coastal regions like Digha and Mandarmani are swarmed by a large number of tourists, Tajpur is often left out because of the conspicuous emptiness around its shoreline. But then, the void prevailing on the pristine beach defines its profound tranquillity. Its splendour can stand tall when compared to many congested beaches of Goa, Gujarat, Mumbai and even South India. Here’s the story a 2-day’s trip to Tajpur from Kolkata, that took us close to mother nature and changed us for the good. Read on to know it all. 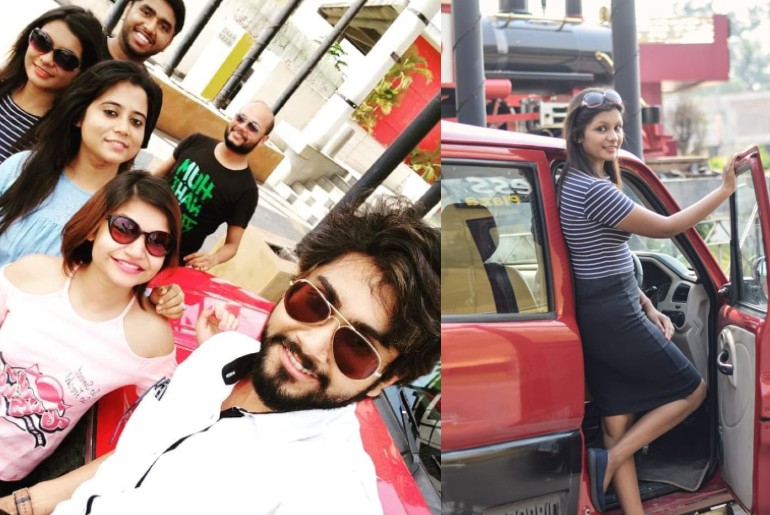 We Started At 7 A.M. From Kolkata…

It was the year 2018, in the month of October. We commenced our journey from New Town in Kolkata in a hired car at 7 AM in the morning. In 20 minutes, we were on the Nivedita flyover that led us to the highway. We were crossing railway stations, shrub flanked roads, ponds and more, and it was a journey worth remembering. Unlike the bustling roads of Kolkata, the highway was uncontested and we were having a smooth ride. We kept chatting and tuning to the songs of road. Two hours flew in a jiffy and we could not even understand. At around 10 AM, we grabbed cups of tea and bread toasts from a roadside tapri to satiate our hunger pangs for the time being. We had planned a heavy breakfast at Express Food Plaza in Kolaghat, which would fall on our way to Tajpur. 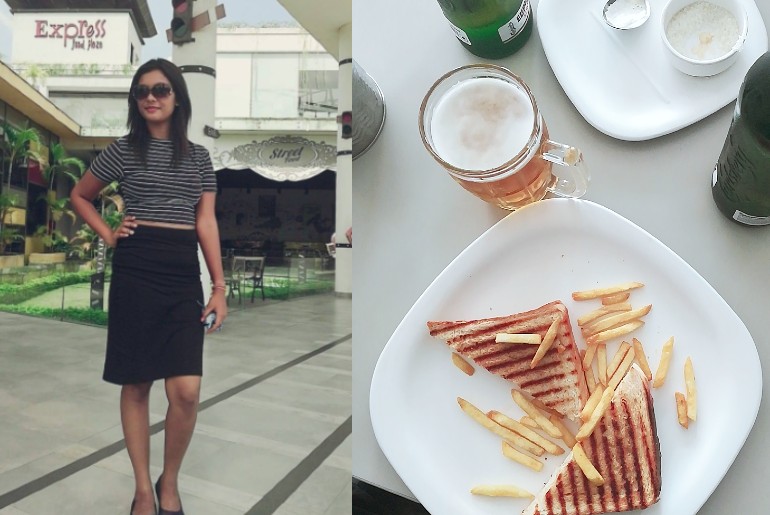 A Delish Breakfast At Express Plaza

Express Food Plaza is a spacious food courtyard in Kolaghat, where tourists usually take a halt while on their way to Digha, Mandarmani or Tajpur. Express is best known for its dhaba-style food, but it also serves European and Pan-Asian dishes. We had dahi parathas, sandwiches and French fries and some morning beer at Express. One of our friends had to skip the beer as he had to drive the car. 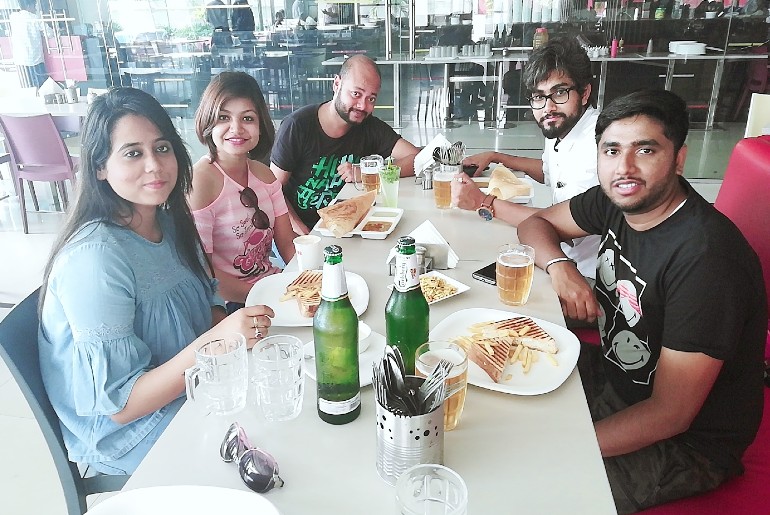 Post breakfast, we did not leave the opportunity to get some pictures clicked inside the Instagrammable white courtyard. In fifteen minutes, we were back into the cars again and we knew that in around 2 hours, we would be in our destination. A few kilometres after Kolaghat, the road was a bit craggy. Right after crossing the abrupt expanse, we could see narrow elevated lanes with green fields, mud huts and tall trees on both sides with zero touches of urbanity.

When Google Map Ditched, A Local Turned Out To Be The Savior

We tried to locate our beach resort on Google Map, but it almost led us to nowhere twice, as there were unanticipated road blockages. Finally, a local helped us with the location of the beach. Roughly around 1 PM, we reached our resort, Moon View, which was around 7 minutes walk from the main beach through a narrow jungle. 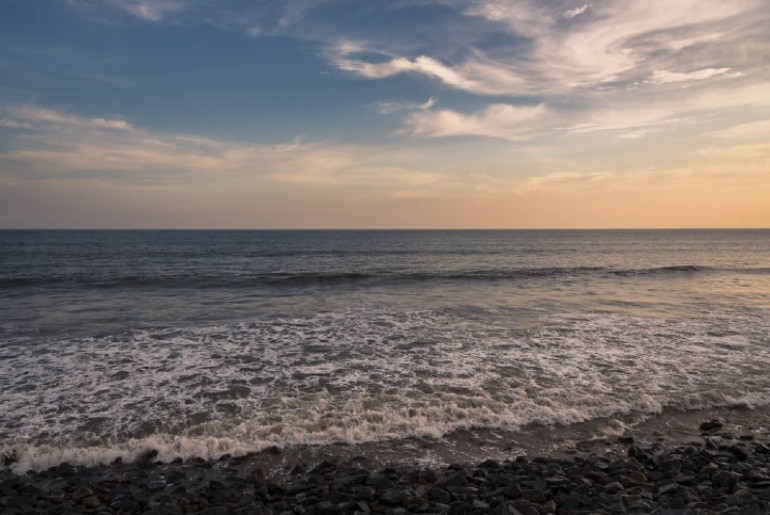 All that could be heard there was the sound of waves, intermittently interrupted by the chirps of the birds. There was a huge gate outside our resort which the hotel boy opened for us, allowing us to park the car inside. The cottages were pretty, with a separate dining room, that overlooked a lush green lawn, with a pool and a swing. Behind the pool, there was a dainty home of adorable rabbits too. 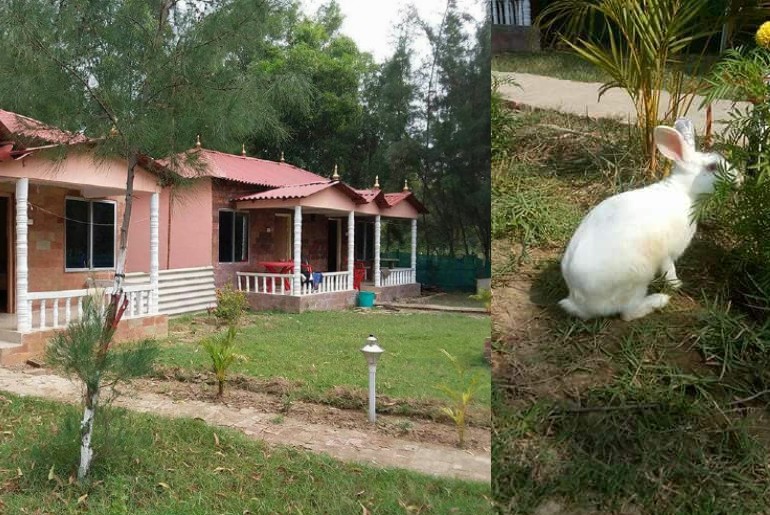 The Magical Sunset On The Sparkling Sea Waters

We freshened up and had our lunch at the resort eatery. For lunch, we savoured hot rice with delectable pomfret curry. At around 4:30 PM, we headed towards the beach to feast our eyes on the view of the magical sunset on the sparkling sea waters. Painted in the reddish-orange hues of the sun, the sea looked like a vast expanse of liquid gold. The sun gradually hid behind the horizon, but the shoreline was still visible under the silver lining of the moon. Our resort was on the farthest corner of the beachfront and only the six of us were the visible humans on the beach. It was dark and cold. 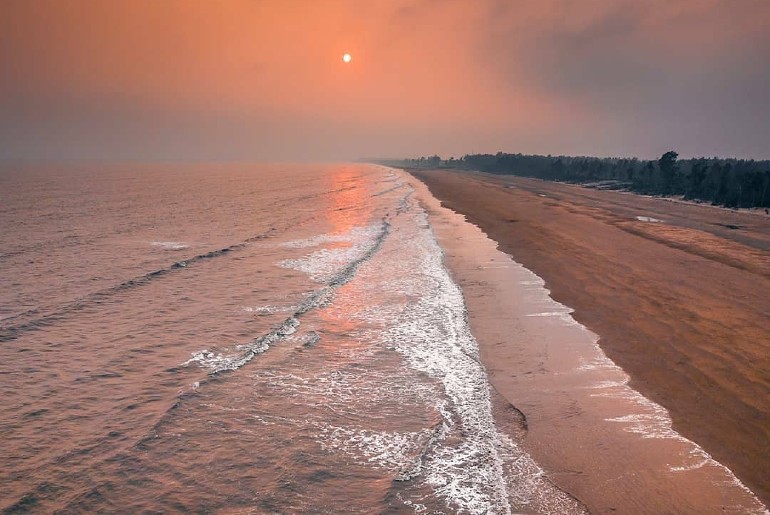 Suddenly The Beach Began To Turn All Red…

The crystal clear waves kept hitting the beaches and the sky was full of stars. We were simply roaming around on the beach, probably seeming like ghosts meeting up for a party from a distance. Yes, the beach was that empty. Suddenly, we noticed the beach turning red and in a minute, there were hundreds of red crabs taking over the beach. They were about five metres away from where we were standing. One of our friends got adventurous and started walking towards the crabs. Signalling human presence, the crabs lurked back under the sands all over again.

An Isolated Beach Shack With A Hammock

There was only one beach shack open in the region, run by a village couple. We asked them if they had anything special for dinner. The lady said she would cook whatever we would like to eat. We decided on having chicken and paratha for dinner and within minutes, the lady arranged for the same. They served us the food at around 8 PM, freshly cooked in authentic village style. There was a hammock attached to the bamboo rods outside the shack, where I reclined after the hearty meal and spent some time looking at the star-studded sky. Only a few things in this world could be compared to the peacefulness of that very moment. 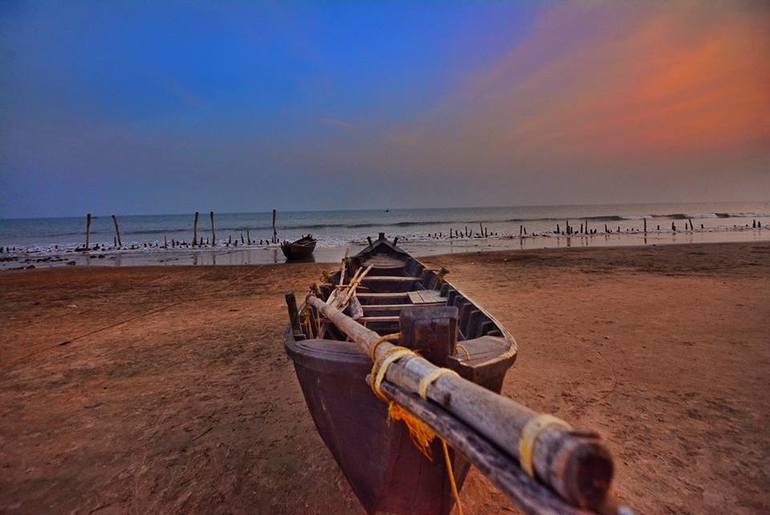 Pledging To Wake Up Early To Catch In Sunrise

Heading back to the lodge was yet another noteworthy experience. The narrow stretch of 7-minutes leading to the resort was absolutely dark and the only way we could sort out our ways was through our mobile torches. There were no people, no animals, only us and the prominent darkness. A flicker of light confirmed that we had finally reached our resort. We had a wee bit of party for the night along with some heartwarming music. We went to sleep at 2, but I had made up my mind to wake up at 4 AM to see the sunrise. 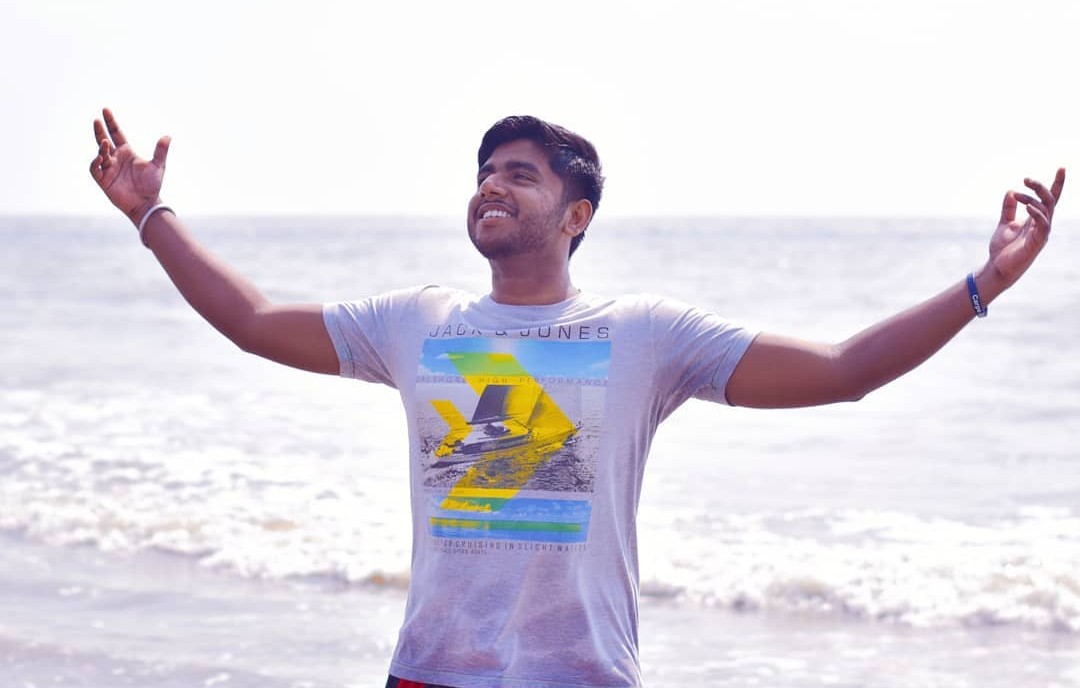 The Waves That Brought The Sea Shells To The Damp Waterbeds

When I woke up, I realised that I had already missed the first ray of the sun. The clock was striking 6. Without wasting time, I and one of my friends rushed to the beach. We noticed that there were patches of water formed on the waterbeds. The waves crashing on the shores were bringing in seashells of different shapes and sizes. I started strolling through the shoreline, cutting my way through the foaming tides. There was a bamboo built tower too, climbing which, one could enjoy a panoramic view of the beach. 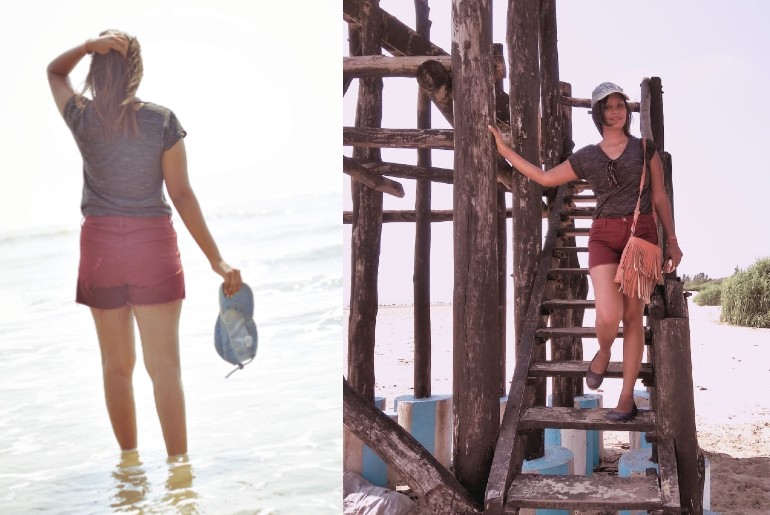 Taking A Dip In The Salty Waters

In an hour, all our friends were on the beach and we were ready to take a dip in the salty waters. Keeping our shoes on the sand, we happily spent some time playing with the waves and jumping high on the waters every time a heavy wave approached towards us. 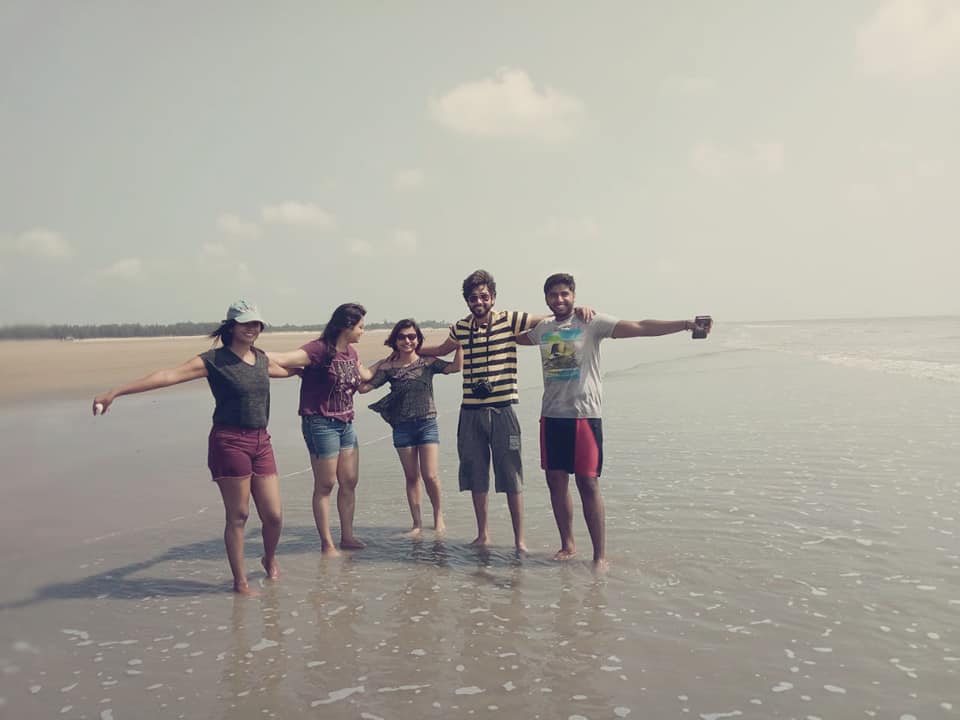 We went back to the hotel at around 11 AM and quickly started wrapping up, after bathing, as we were to check out at 12:30 PM. Leaving behind the vast ocean, we started for Kolkata again and managed to reach Kolkata at 6:30 in the evening. Within a very short span of time, we had left a piece of our heart at the secluded beach. It had given us a literal break from the daily routine and on the empty beach, we had realised that to all the agonies, pains and stresses of humankind, nature and only nature, can be the best medicine.