We Visited This Gorgeous Bengal…
Travelling From UAE To Pakistan?…
Malayalam Actor Mohanlal Fulfils Wish…
You Can Now Travel In… The tedium of our mundane lives often yells out for some kind of escape. Amid the humdrum of our daily schedules, at the end of the day, our souls are unsettled, always craving for something awe-inspiring. Maybe that is the reason why we love to travel places, be it somewhere nearby or far. We, a bunch of crazy mavericks from Kolkata, were striving to make our way, somewhere out of the city, somewhere to the hills, somewhere to the waterfalls, but time and money were the major constraints. But as the saying goes, when there is a will, there is a way. We finally chalked out a spot to be covered within a couple of days at the lowest possible budget. And we set off for the Purulia tour. 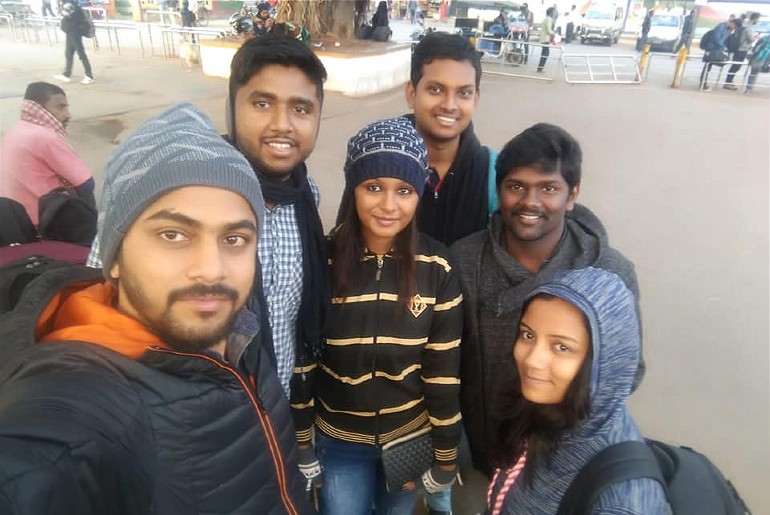 A Night Of Games, Conversation And Laughter Inside The Moving Train

It was a Friday night in December and the six of us gathered in Howrah Station. We were to catch the Howrah-Chakradharpur Express at 11:05 PM. from Howrah. The train was expected to reach Purulia Station by 6:30 AM Our night at the train was packed with loads of fun and laughter. Some of us played cards, while some others listened to the best of music while enjoying the scenes outside. We had scrumptious home-made puris and potato curry for dinner. The express was punctual and reached our destination on time. We waited at Purulia Station for a friend of ours, who was to reach Purulia at 8:30 AM from Jamshedpur. While waiting, we ordered samosas and tea for us from a local shop at the station. The samosas were way bigger than the normal size and were crispy enough to kickstart our morning in a delicious way, despite its redundant oil content. By the time our driver arrived, our friend from Jamshedpur had also reached Purulia. The Arresting View Of The Splendid Village Of Muruguma

We started at the station at around 10 a.m. and reached Muruguma, the place where our resort was located, at around 11:45 AM. Muruguma is a quiet, splendid, artistic village, bounded by hills on all sides, with a spectacular view of the eye-catching Muruguma Dam. We halted inside the mud huts of Bonpolashi Eco Village, Muruguma and were residing right on mother nature’s lap. 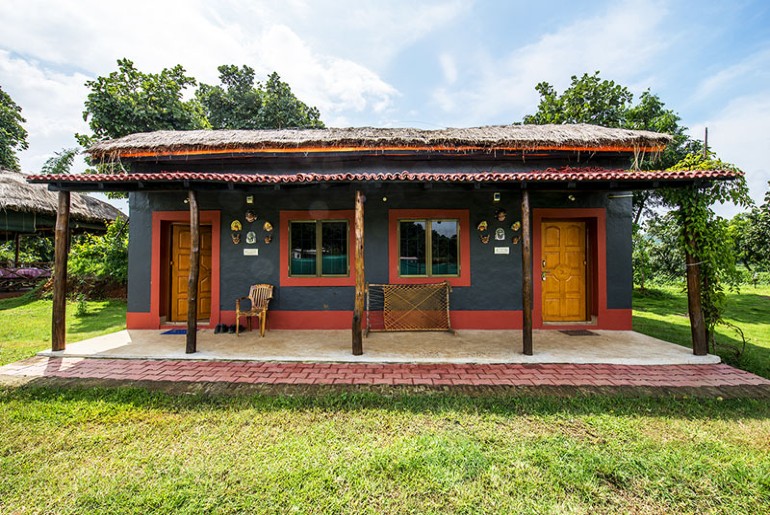 The rooms were spacious with thick walls and glass panes and they were overlooking a lowering sward eventually making way to the Muruguma Hills. The view was prepossessing and delightful. 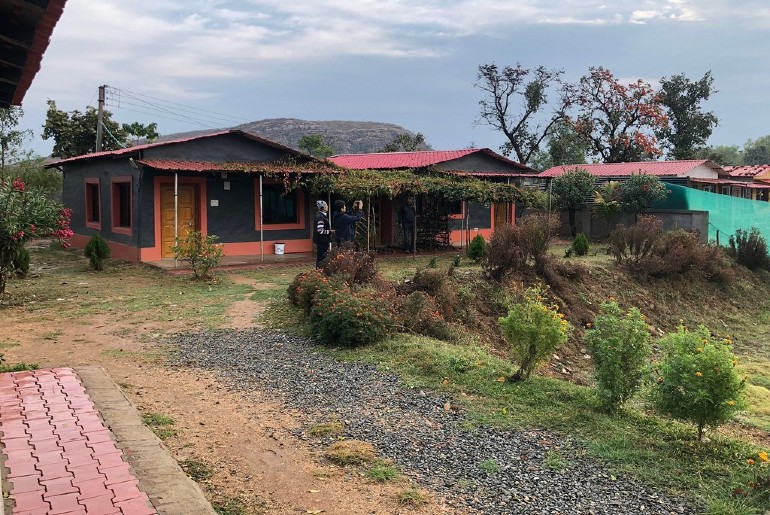 After freshening up, we all were ready for our first day’s tour. We boarded the Scorpio and headed towards Ayodhya hills. It was a zig-zag road going up with the sight of the mesmerising ‘Gram-Bangla’ ( the village of Bengal) on both sides of us, locked away by the peaks of Ajodhya. Our car stopped at a rocky place and we walked down the hilly slopes to find a beautiful lake surrounded by towering rocks on all sides. The rocks were colossal and lofty, resembling a miniature version of the dragon hills of Africa. It was the serene and picturesque Marble Lake of Purulia, amid the rugged stretches of Ajodhya. While sipping some hot black tea from a mountain stall, we came to know little stories about the place, like scenes of blockbuster movies being shot at the rocky realm. 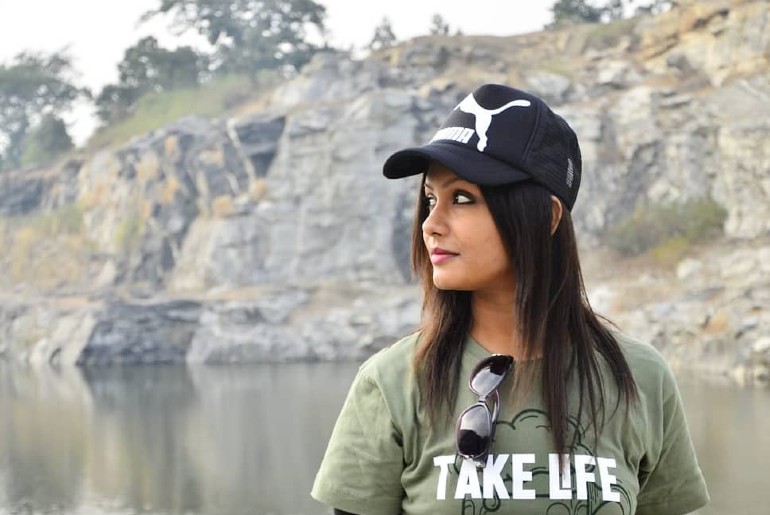 The 400-Stairs Down Bamni Falls

After Marble Lake, we had Bamni Falls in our list. It was just a few metres away from Marble Lake. The stream was about four hundred stairs down, and the stairs were crude and uneven, cut out of the hills. One needs to be really careful while making their way to Bamni. But once the waterfall is visible, nobody will regret being there. The area is not very enormous, but it is modest and elegant. The ebb and flow of the stream are definitely going to lure a nature lover. There’s immense joy in overcoming the cragged hilly lumps and enjoying the excellence of the enchanting waterfalls. The Bamni region had four-five shops selling regional sweets, chocolates and some small handicrafts. I got some local desserts and found them really delicious. 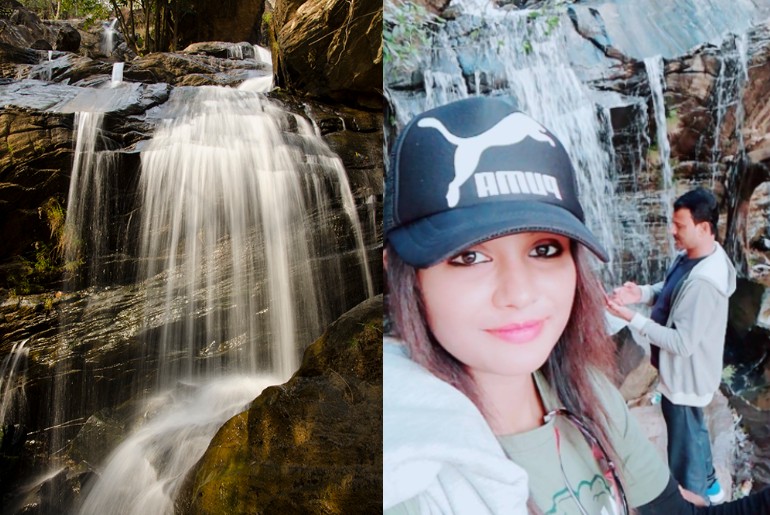 The Hamlet Of Chhau Masks

A few kilometres away from Bamni was a village specializing in the creation of tribal masks like the Shantal, Chhaw and animal faces. The sculptors sculpted those masks with utmost patience and perfection. Villages like these remind us that even in the modern days of technology and machines, the beauty of handicrafts and handmade artistry will never lose its verve. 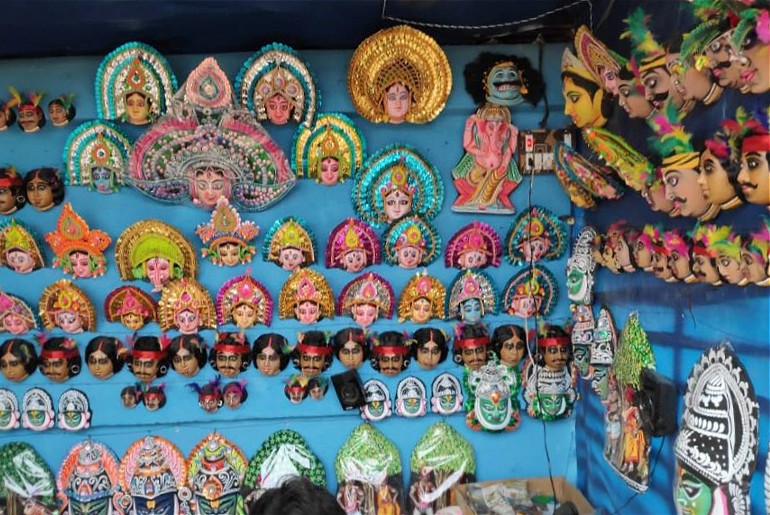 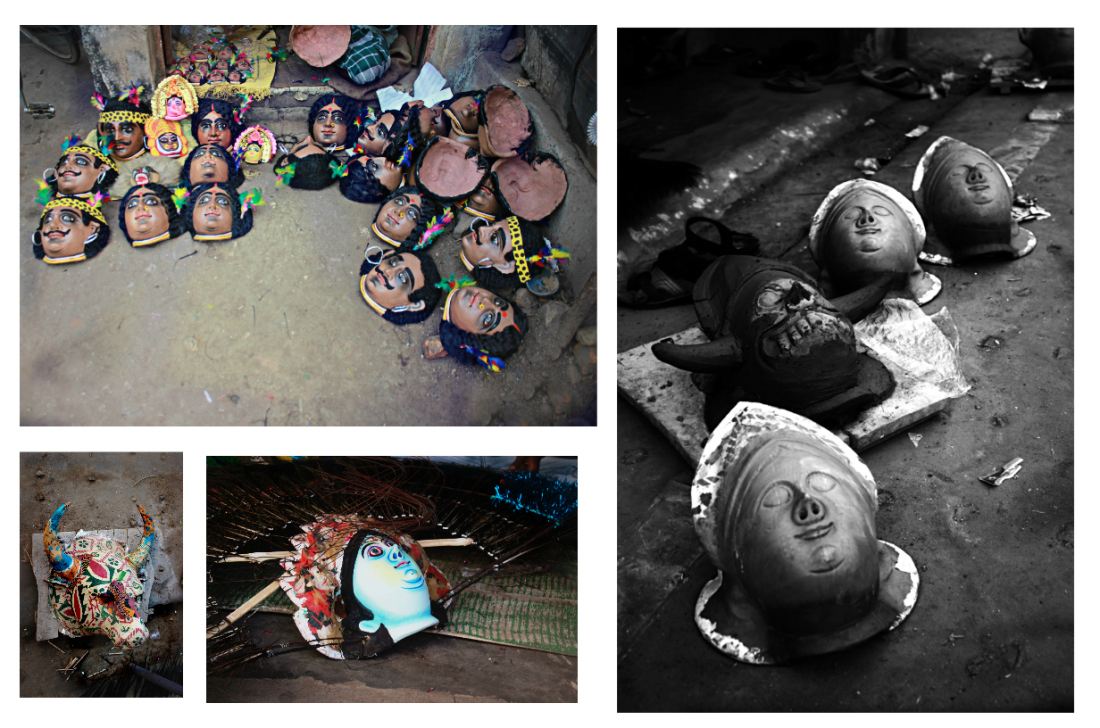 The Fog-Smeared View Of The Lower Dam And Upper Dam

The sun was almost slumberous when we reached the Lower Dam, another marvellous location of Purulia. We did not stop our car here since we still had the Upper Dam in our list. We reached the Upper Dam at around 5:15 in the evening when dusk had already taken over. The hills encompassing the Upper Dam looked breathtakingly captivating. The roads were clean and well maintained, and the winter fog amid the fading street lights was adding to the charisma. 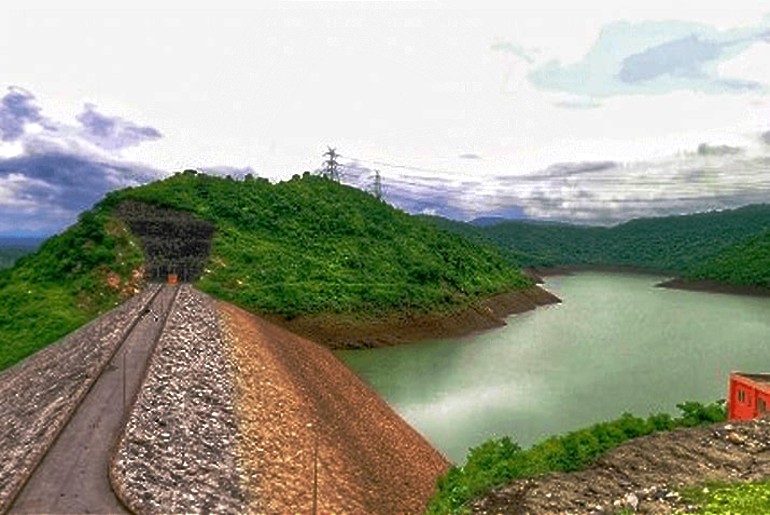 The Bonfire Amid The Wintertime Darkness

We returned back to Bonpolashi Eco Hut at around 6:30 in the evening. After having tea in the room, we headed to the moor outside where we got some bonfire arranged for us. We encircled around the bonfire, chatting and singing away in the wintertime darkness, while our kebabs were getting prepared on the grill. Chilly evenings, rolling land, good companions and chicken- nothing more could have sorted us better. 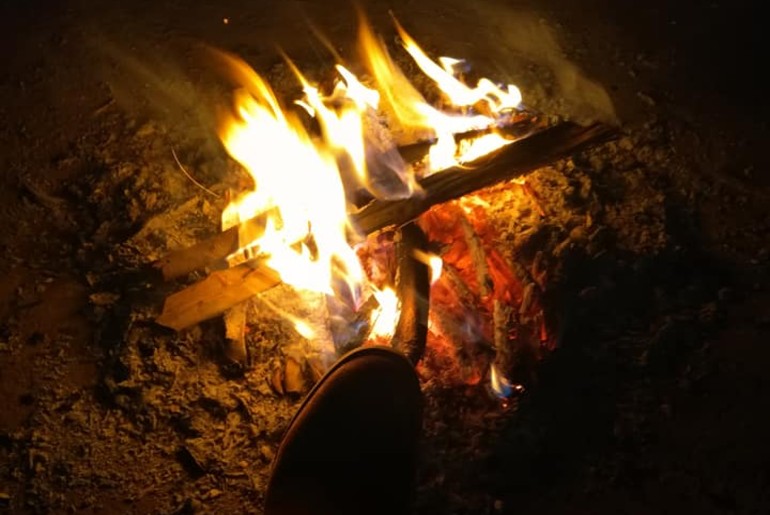 We had roti and chicken for dinner and most of us went back to sleep early since we had to wake up fresh for the next day. Others kept enjoying the night sitting by the fire.

Also Read: I Explored Gangtok To Rinchenpong In Sikkim In 5 Days; Here’s How I Did It

It was time for us to check-out from the resort. Our train was at 8 at night. We had ample time in between and we decided to make full use of the time we had. We could have opted for the Deulghata Temple in Purulia, but that could take only an hour or two, out of the long eight-nine hours left with us. So, we started for Ranchi. Hundru Falls, Ranchi, is about 80 kilometres away from Bonpolashi. Starting from the hotel at around 10:30 in the morning, we reached our destination at around 12:45 PM. The path towards Hundru was enthralling. It had multiple viewpoints overlooking the lofty mountains, stretching far away behind and uniting with the blue sky. We had to cross eight-hundred stairs by foot, but the stairs were well constructed, unlike Bamni. 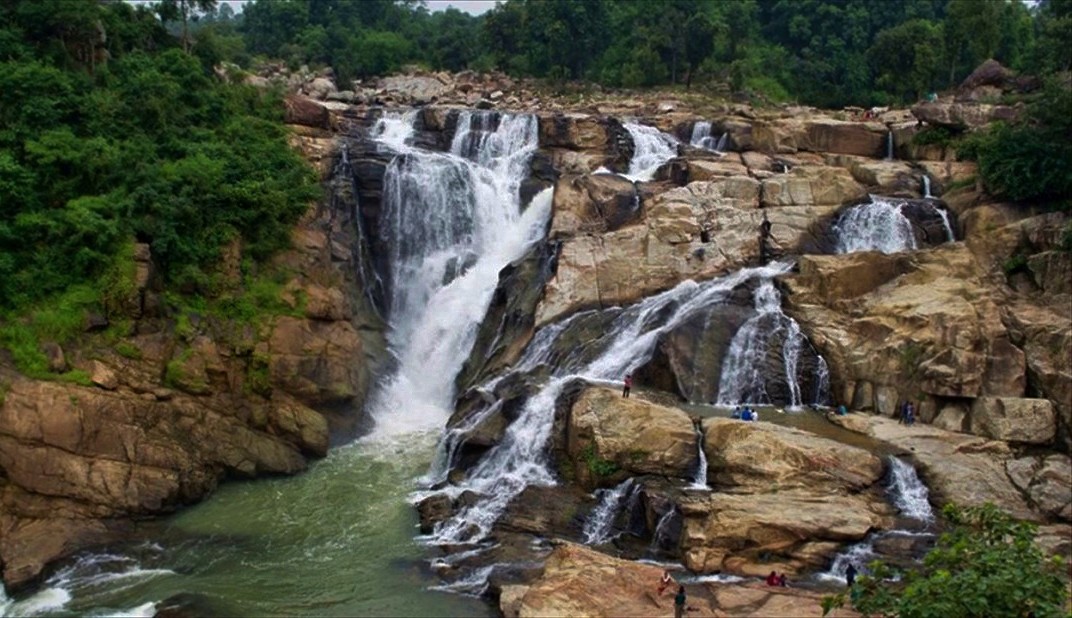 After walking down the eight hundred stairs, we had many more bumps and stones to cross to finally sit by the stream and drench our feet in the cold water. There was a raft arranged for the tourists that took us to the closest proximity of the waterfall and we were a stone’s throw away to get soaked in the stream. Sprinkles of water kissed our faces and it felt divine. We were creating one of the best memories of a lifetime under the cold rapids. 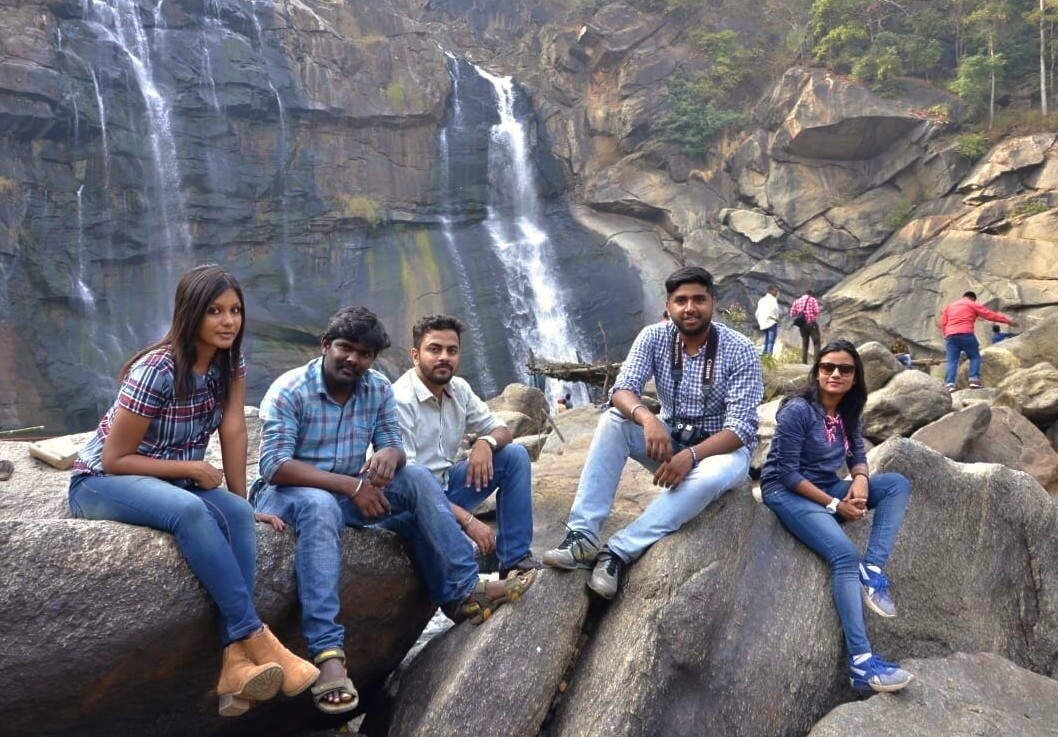 On our way back to the car, we bought some wooden swords, axes and fishes, crafted locally. From there we headed on to Jonha Falls. We were having a long road trip with numerous sightseeing, a bunch of good music and endless conversations. It was about 4 in the evening when we reached Jonha. The gatekeeper told us to hurry lest the doors to the falls would be closed. We had to walk only a few stairs down to get the view of Jonha Falls. And it was enormous, spread across a considerably wide area. 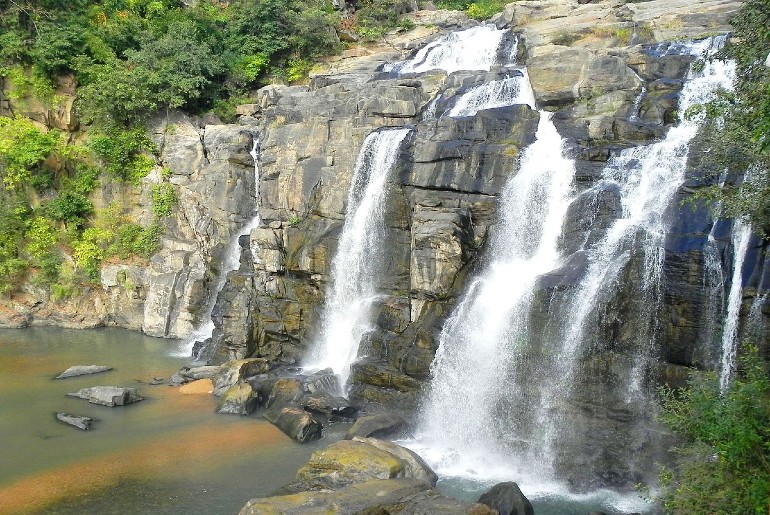 We regretted coming here late since we could not go entirely down to the bed of the fall due to the lack of time. But we could see the sun gradually sinking beneath the mountains, casting its magical glow on the falls. The setting sun was probably reminding us that our trip was finally ending. 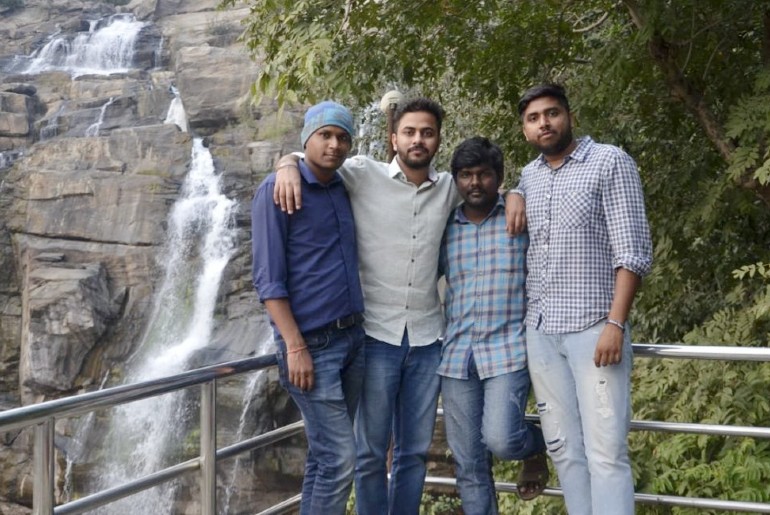 Also Read: This 4000 Feet High Orange Village Near Darjeeling Is Straight Out Of A Fairy Tale

Way Back To Kolkata

We gorged on some Jharkhand special crispy pakoras at Jonha and finally left for Purulia Station, bidding adieu to the land of mountains and falls. We reached Purulia at about 7:50 at night and since your train was running late by an hour, we could have our dinner in the station itself. The total cost of our trip, including hotel, bonfire and car was around ₹4000 per person. We had booked two rooms in our mud hut and had to pay extra charges for the bonfire arrangement. We boarded the train around 9:15 PM and after a tiring day, we all went to sleep, only to open our eyes at 6, as we were finally home. The chilly morning at Howrah welcomed us, reminding, its Monday and we have to be back to work within a few hours.