I Witnessed The Unique Mating Of Tigers At Ranthambore National Park & Here’s How You Could Too! 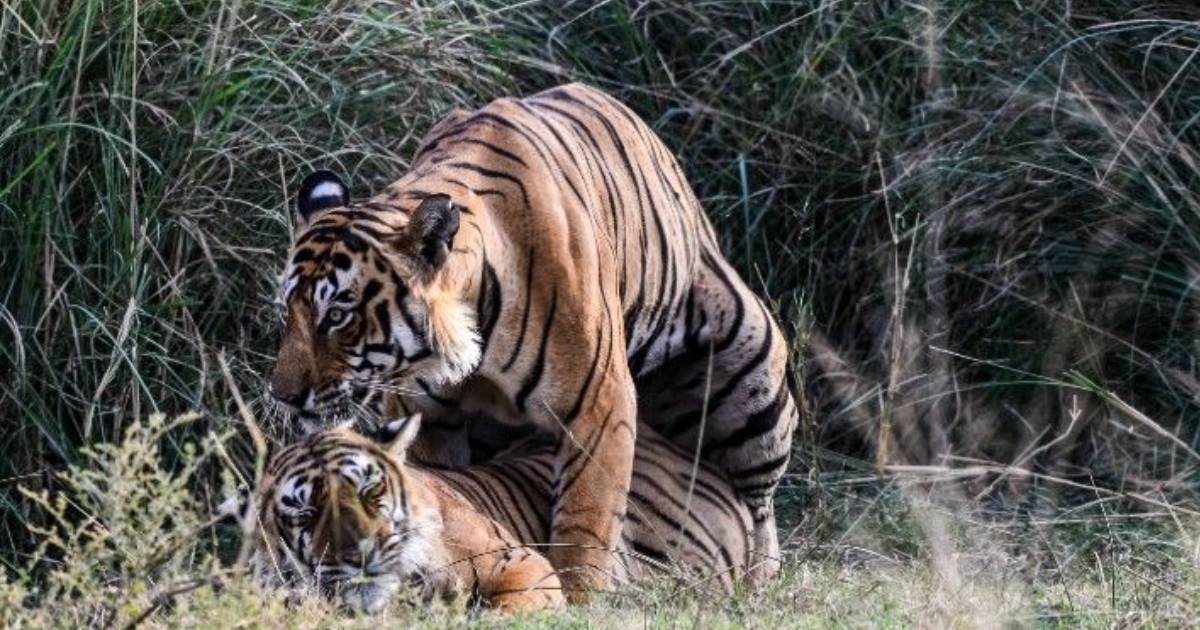 This is what exactly happened when a male tiger (T112) and a female tigress (T103) got together for 3-4 days around April 8, 2021, in Ranthambore National Park. As luck would have it, my husband Dewang and I were fortunate enough to witness this pure and aggressive act of tigers mating for the first time on this trip. We missed the same pair mating a little over 3 months ago in January 2021, which is why we wanted to ensure that we seize this opportunity this time.

We were on our first-ever full-day safari on April 8, 2021, and had already sighted 17 tigers for the day. Around 4 pm, one of the fellow naturalists told us that a few kilometres away, a pair of tigers had been sighted with a kill. We had about 2 hours of safari time remaining and we decided to take a chance and find out if these were the same tigers that we had missed on our previous trip.

Usually, male and female tigers share a meal when they are interested in each other. So when we heard that they were together with a kill; I had a hunch that they would probably mate too. So I requested our naturalist and driver to head in that direction as we didn’t want to squander what would be a once-in-a-lifetime opportunity.

When we reached, we found the female tigress T103 resting on the grass by the stream and the male tiger T112 sitting a few feet away. They had finished feasting on a spotted deer and were resting after their meal. By now, it was time for us to exit the park and it would take us at least 30 minutes to get out from where we were. Due to time constraint, took some pictures of the tigers and left the jungle for the day.

Also read: Deepika-Ranveer &#038; Alia-Ranbir Vacay In Ranthambore National Park, Here&#8217;s Why It Should Be On Your Bucket List Too! 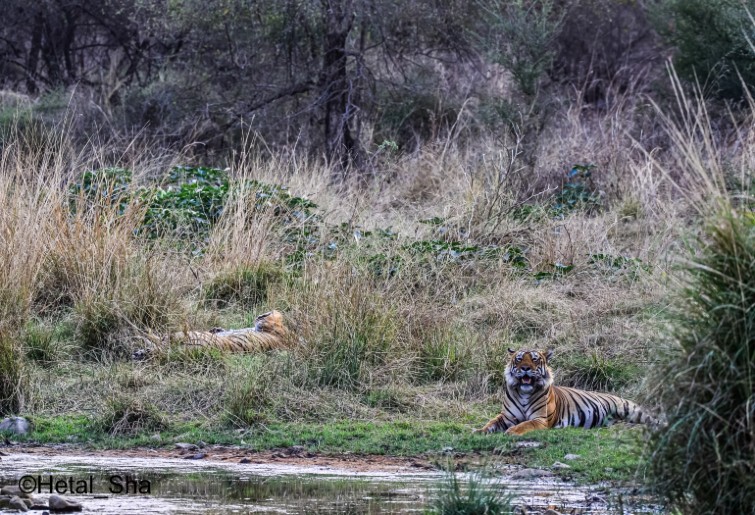 Male Tiger T112 sitting on the right and female tigress T103 sleeping in the bushes in Ranthambore National Park.

For the rest of the evening, we were thinking about the tigers and started planning what we could possibly do the next day to ensure we get a chance to see them again.

Unfortunately, the next day for our morning safari we were in a different zone and lost the chance of seeing the two tigers. And to foul our moods even further, we heard from our acquaintances that the tiger pair was in the same spot and mated THRICE early morning. (We lost this opportunity for the second time. Last time, in early Jan 2021, while we were on the same side of the park, the same pair were mating inside the bushes; making it tough for everyone to see them but only hear them growling.

I was really upset with this and requested our naturalist to check if there was a way to switch our zones as I didn’t miss this golden opportunity for the third time. And guess what> We did manage to change our zones and we head directly towards the tiger mating pair. 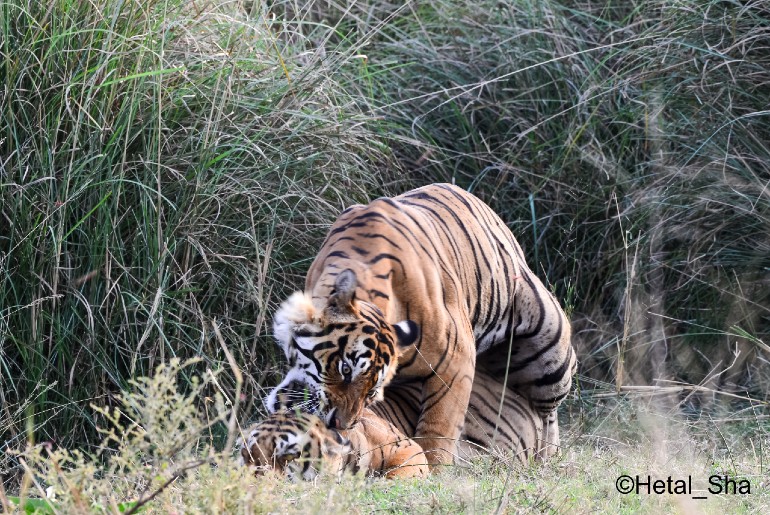 They were in the same spot, sleeping peacefully under a bush and saving themselves from the intense summer heat of Rajasthan. It was about 3:30 pm in the afternoon. The sun was at its harshest and the heat was making us melt and burn. We didn’t have any shade and so we along with all our acquaintances were forced to bear the harsh sun with only caps to protect us from the summer heat. Finally, after getting baked and burnt for 2 and a half hours, the tiger pair suddenly woke up!

T112 climbed over T103 and they mated!! It must have lasted for less than 15-20 seconds but in that span of time what we saw will be etched in our memories forever… The aggressive hold of T112 and the tightly shut eyes of T103 enjoying herself, and then both of them looking at the spectators; truly a memorable sight to behold! 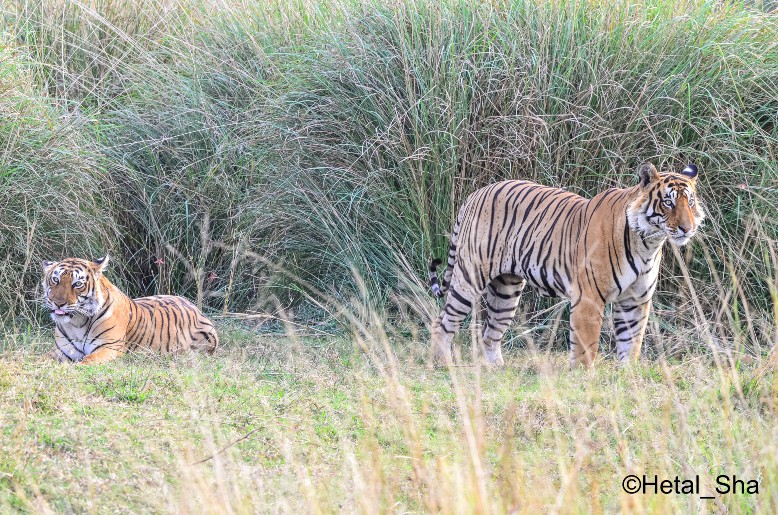 After the act, keeping a watch on us

While Dewang managed to capture a quick video of their mating, I photographed them on my two Nikon DSLRs (yes, it tough to multi-tasking but I managed it somehow).

Also read: Soak In The Good Vibes At The Luxurious Mughal Tents In Ranthambore

As I wasn’t satiated enough; we decided to head back into the same zone for our last safari for the trip. And as soon as we entered the park at 3:00 pm; within 10 minutes we saw a female tigress T102 who recently had 4 cubs sitting by a tree! From the way she was panting, it seemed that she may head towards the watering hole on the other side of the road and so after getting some of her pictures, we decided to park ourselves next to the water body. 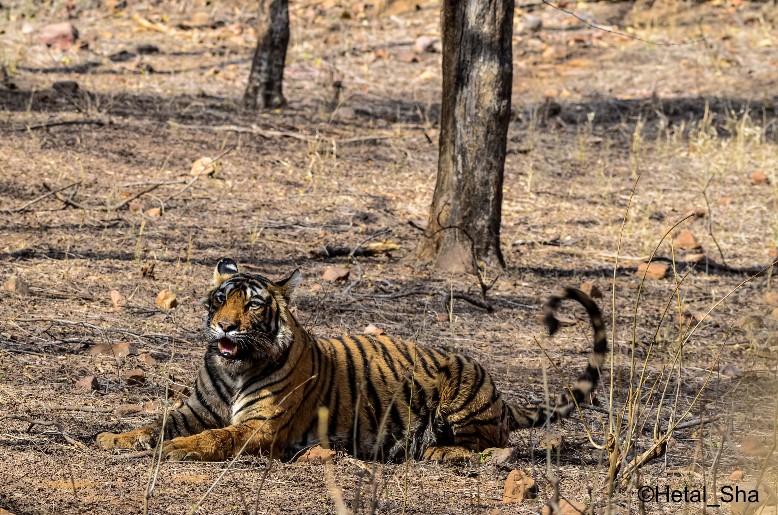 Female tigress T102 sitting on the side of the road.

However, as soon as we reached the waterbody; we see another tigress sitting next to the watering hole! This tigress was T125 who was recently involved in a territorial battle with her sister for Ranthambore’s prime territory in Jan 2021.

After about 30 minutes, T102 came near the watering hole and looked quite pissed off seeing that T125 is still in her territory. She snuck up close and growled at her ferociously, ready to attack. However, just as she was about the attack the other tigress, T125 immediately surrendered herself and bowed down. T125 sat growling near the waterbody for the next 20 mins while T102 circled the entire area marking her territory.

This was a fantastic start to the safari and about 4.30 pm we decided to head towards the mating tiger pair. It was time for them to wake up from the slumber as the sun was going down for the day giving us yet another chance to see them mate.

On our way, we ended up witnessing yet another unexpected sighting – the shy yet stealthy sloth bear! He was sitting quietly on the side of the road while we photographed him before he ran back into the bushes. 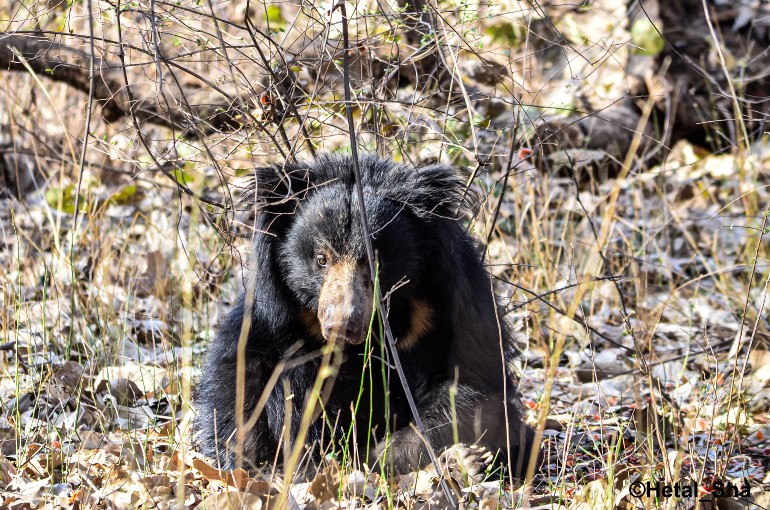 A sloth bear sitting by the road

By 5 pm, we reached the spot of the mating tigers and parked ourselves on the side of the road. The male T112 was sitting next to the bush with his mate, not in sight. After patiently waiting, for few more minutes, we heard some movement in the bushes and his lady walks out. T112 grabbed her once again for yet another round of intense lovemaking. 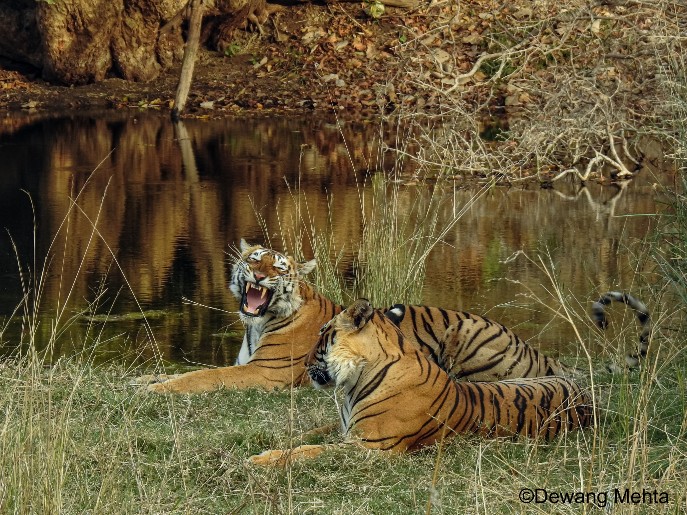 Also read: 6 Opulent Suites You Can Book In The Palaces Of Rajasthan &#038; Live Like The Maharajas

I couldn’t have wished, prayed, or dreamed of a better way to end this trip! This was truly an incredible experience and will cherish it for the rest of our lives (while aiming to capture more such wildlife activities).