The season of oranges, winter, is here and the largest orange in India has grown in the country’s orange city, Nagpur. The giant orange has a circumference of 24 inches and it weighs 1.425 kg as reported on November 23, 2020. Entrepreneur Ritu Malhotra has shared pictures of the humongous orange on Twitter, and they are already getting the internet bowled over. Also, did you know that Darjeeling has a 4000 feet high orange village that’s straight out of a fairytale?

The largest orange in India, measuring 24 inches by circumference and weighting a thumping 1.425 kg, recently grew in a Nagpur farm. Entrepreneur Ritu Malhotra has shared pictures of the same on her Twitter handle, stating, “Nagpur the orange city, glorified for the abundance production of oranges has found the largest orange by circumference measured 24 inches and height 8 inches with weight 1.425kg on 23 November 2020. The orange grew in my friend’s farm.” The winter capital of Maharashtra, Nagpur, is often referred to as the ‘Orange City of India’ as a large number of oranges are cultivated in the region. Meanwhile, California’s orange poppy bloom is so bright that it is visible from space.

Hulk of an orange??

Internet Is Going Gaga Over The Jumbo Orange

Malhotra’s post on the largest orange has grabbed thousands of likes in just three days. Some people have also made interesting comments revolving around the giant fruit. One user commented, “Hulk of an orange”. Another user wrote, “Itna to zero figure walo ki kamar nahi hoti.” Another joked, “All I need is peels of this orange to spray that in someone’s eyes.” A user even wrote, “To eska naam orange nahi “Oranga bad” Hoga”. No wonder, along with the pictures, the comments section is also drawing a lot of eyes. 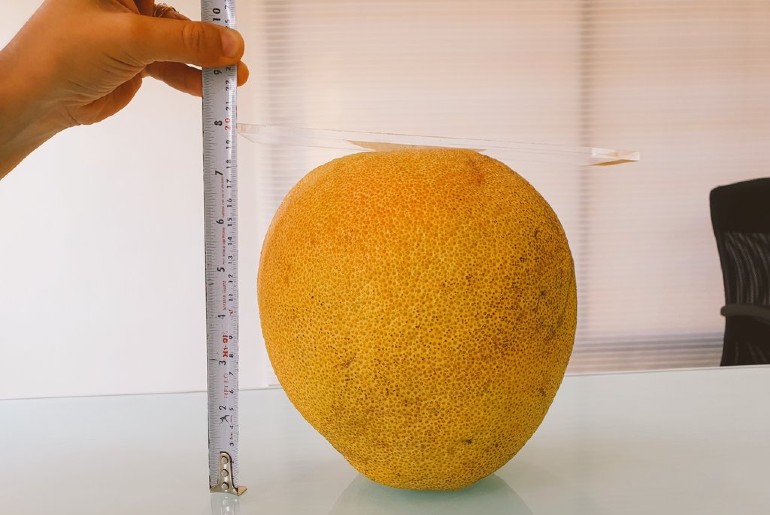 What’s your say on this amazing, king-size orange? Let us know in the comments section below. On that note, Orange N Orange in Laxminagar, Nagpur serves ice-creams in fruits: