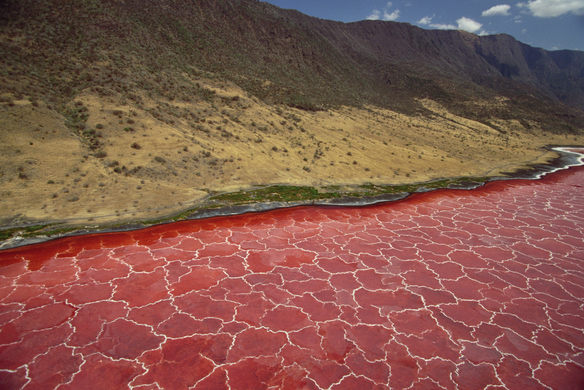 Image Courtesy: Atlas Obscura
by Gizel Menezes March 23, 2020 3310
FacebookTwitterWhatsappEmail
Amidst COVID-19 outbreak, Curly Tales encourages you to stay indoors. We take you around the world from the comfort of your home. #SpreadPositivity #ArmchairTravel

Lake Natron is known to be one of the most inhospitable places for a majority of fauna in the continent of Africa. With a pH that can reach levels as high as 12, and scorching temperatures reaching up to 60 °C (140 °F), the lake can literally burn your skin off. The lake also possesses a bright red color, which acts as a warning signal, cautioning most life forms to stay away.

Situated in Arusha Region of Tanzania, the lake in Africa’s Great Rift Valley is one of the most caustic lakes in the world. 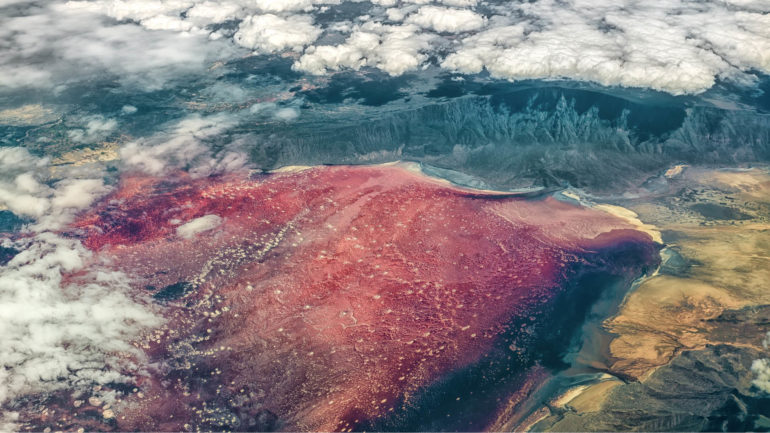 Also Read: This Lake In Uttarakhand Contains Hundreds Of Skeletons Belonging To 800 AD

The lake gets its reddish hue from salt-loving microorganisms called halophiles that thrive in its alkaline waters and produce reddish pigments, which color the lake’s salt crust red. The salty crust, however, changes over time, giving the lake a different appearance each time.

Located in an arid region where rainfall is erratic, the terminal lake is fed by hot springs and small rivers. The water from the lake also does not drain out to any river or sea. Volcanic ash from the Great Rift Valley is collected in its basin, making the lake hostile to most organisms.

High levels of evaporation cause natron to be left behind in its bed. Natron, after which the lake has been named, is a mineral salt that ancient Egyptians used for the mummification process. It is a drying as well as anti-bacterial agent; so immersion in natron can suck all the moisture out of a dead body and preserve it against microorganisms that will feed on it.

Animals that die here can turn into calcified statues over time, because of the unique chemical makeup of the lake, which encrusts the carcasses with layers of salt, sodium carbonates, and sodium bicarbonates. 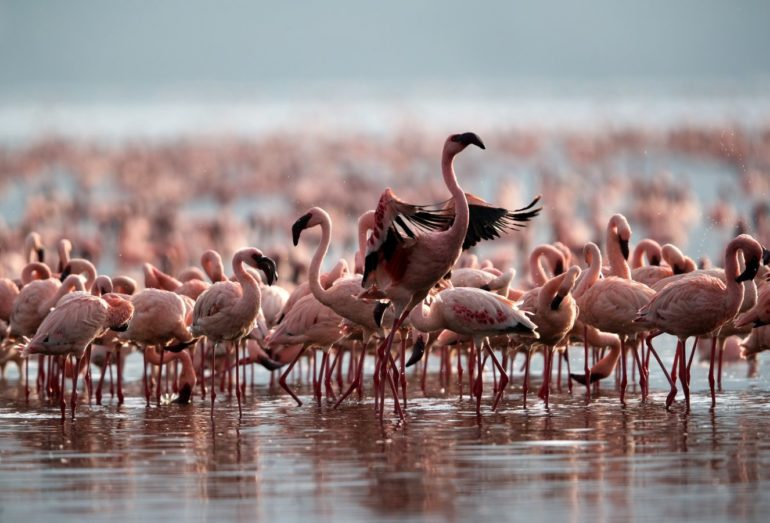 Inhospitable To Most, Thriving A Few

Despite having the most alkaline waters, Lake Natron supports an ecosystem of salt marshes, freshwater wetlands, flamingos and other wetland birds. An endemic species of fish, the alkaline tilapia, has adapted to the lake and lives along the edges of its hot spring inlets.

Lake Natron is the most important breeding site in the world for Lesser Flamingoes as 75 percent of the world’s population of these flamingoes are hatched at the lake. The high salinity of the lake ensures maximum food for these birds as they feed on the tilapia and the algae. The lake enchants bird watcher’s across the world as large groups of flamingoes can be strutting around, the spectacle often referred to as the ‘pink parade’.

Lake Natron has been listed on the Ramsar List of Wetlands of International Importance due to its unique biodiversity and has also been recognized as an important ecoregion by the World Wildlife Fund. This lake definitely makes it to the list of most unique places in the world!

Maldives To Vaccinate Tourists On Arrival To Boost...

I Explored The Best Of Jharkhand & Telangana...