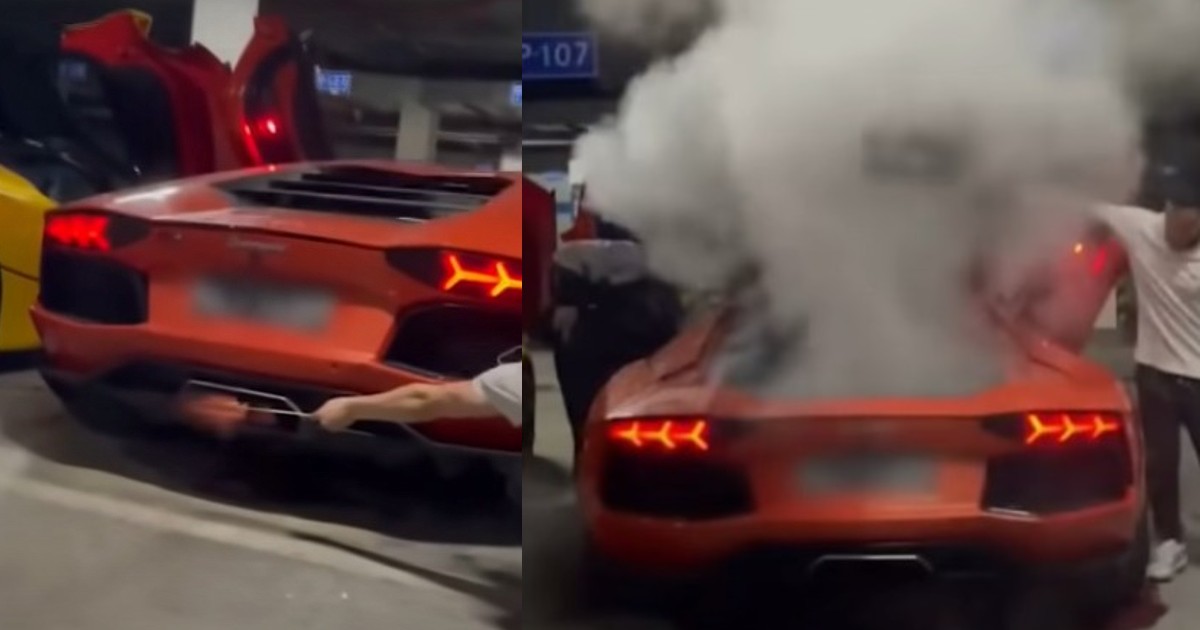 If you love luxury cars, especially a Lamborghini, this story might get you irked. A group of men met at a garage in Hunan, China with their sporty cars. Among them, a man tried to flame grill kebab on the exhaust of a Lamborghini car. However, the consequence of his stunt wasn’t very cool. The luxury car went up in smoke and the red coolant of the liquid leaked and spread on the floor. The video of the incident, which made rounds on the internet, showed that the men had no idea how to handle the mess.

The Lamborghini ‘Bled’ And Went Up In Smoke

A man in China tried to grill a piece of meat by holding it on a skewer inside the exhaust of a red Lamborghini. After watching the video, Capone’s popular ‘Oh no’ song is ringing in our ears. And why not? A Lamborghini blowing up in smoke is definitely painful to the eyes. The netizens were clearly not very happy with the video, and we can’t blame them. Someone wrote, “He made the Lambo bleed… too much money and no intelligence, he does not deserve that car!” Another wrote, “If he doesn’t understand what that’s doing to the car, he shouldn’t have it. One of the worst things you can do is repeatedly rev a car in neutral. It’s not designed for that, especially a Lambo.”

Also Read: Thief Swallows 35 Grams Gold With Ice-Cream In Karnataka To Hide It From Cops

The 34-year-old man David Garcia took advantage of the live volcano in Guatemala and baked pizza on the molten lava. He named the volcano-cooked pizza after the volcano Pacaya. David turned streams of molten lava seeping out from Guatemala’s Pacaya volcano into his kitchen.

VIDEO: 🇬🇹🌋🍕 In an improvised kitchen among volcanic rocks, David Garcia stretches his dough and selects ingredients for a #pizza destined for a rather unusual oven: a river of lava that flows from the Pacaya #volcano in Guatemala pic.twitter.com/wVmnnl61Ib

And he took the internet by surprise by baking the perfect pizza on the lava. The pictures and videos of him baking while wearing protective clothing went viral on the internet. To bake, David used special metal sheets, which could withstand temperatures up to 1,800 degrees Fahrenheit.