What would be your reaction if your favourite celebrity ends up giving you a surprise meet on Christmas? A similar thing happened with the owner of a roadside food stall in Hyderabad. The food stall named ‘Laxmi Sonu Sood Fast Food Stall’ serves Chinese dishes like noodles, fried rice and manchurian. The stall owner, Anil was taken aback on Christmas 2020 by seeing Sonu Sood getting out of his car and walking up to his shop. The actor even ate Egg Fried Rice and Manchurian from the stall. Meanwhile, to honour the actor for his humble deeds, locals in Telengana have even built a Sonu Sood Temple. 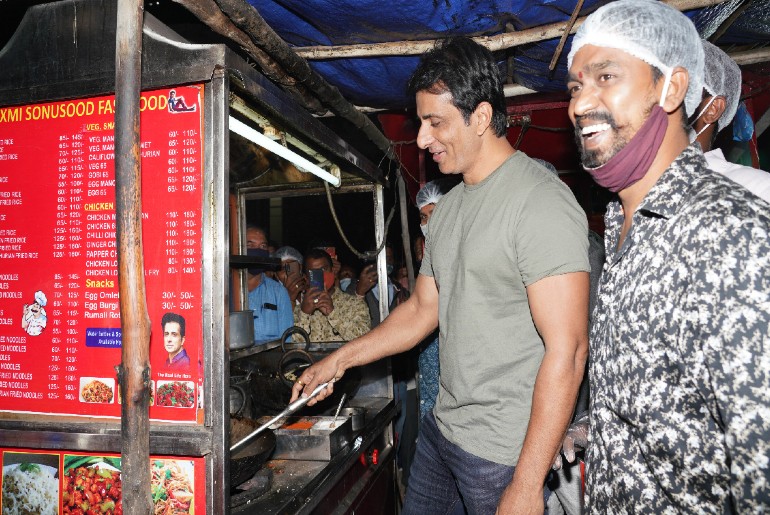 Ever since the coronavirus lockdown, Sonu Sood has won our hearts time and again with his humble deeds. From helping the migrant workers with food and accommodation, installing mobile tower for village students, mortgaging 8 Juhu properties to raise ₹10 crores for the needy, the actor had turned out to be the ‘real-life hero’ of thousands in the trying times. His visit to the street stall has revealed his down-to-earth nature all over again. He had come across the stall online and made up his mind to pay a visit there. According to The Siaset Daily report, the actor has told ANI, “I had seen the stall set up by Anil in Social media, I felt to personally taste the food at this stall. Today I got a chance to visit and I ate Egg Fried rice and Manchurian here.”

The Actor Tried His Hands On Cooking

Not only did the actor visit the food stall and try its food, but he also interacted with his fans at the eatery. What’s more, he even tried his hands on cooking, tossing the food on the tawa. The stall owner has said, “I was really inspired by the social work and service done by Sonu Sood, that is the reason with that Inspiration I set up this Sonu Sood Fastfood Stall.” Sonu Sood is the best example of the fact that love and respect can be earned by humility and good deeds. He has also introduced his own autobiography titled “I Am No Messiah” which speaks about his journey from Moga to Mumbai. On that note, listen to this heartwarming conversation between the actor and our CEO, Kamiya Jani: