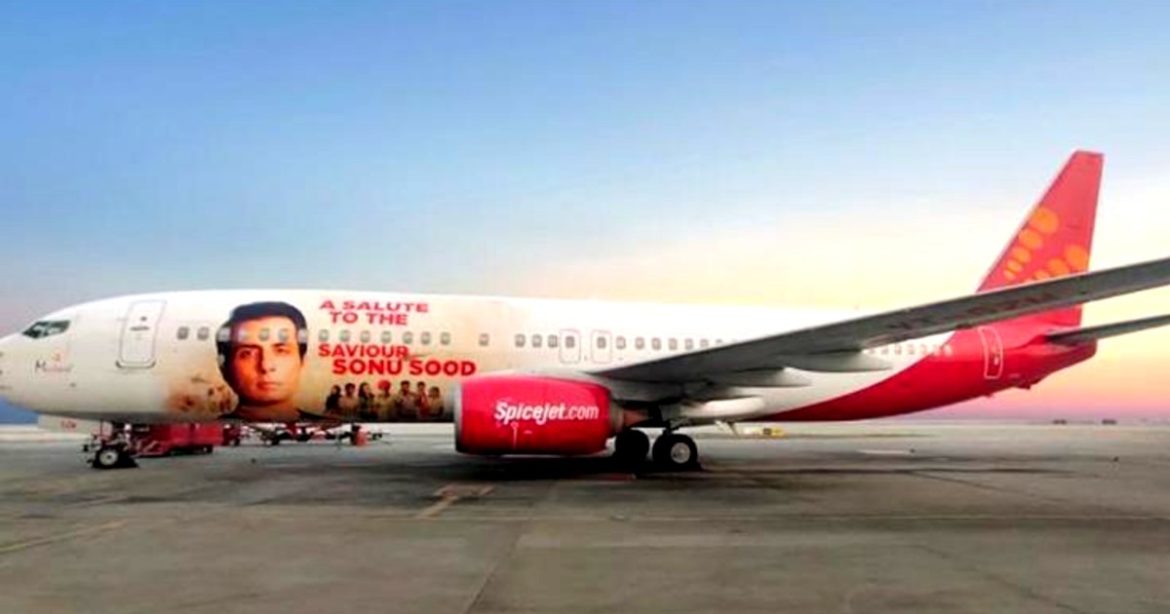 If 2020, were to be dedicated to one person in our country, it would undoubtedly be Bollywood actor and philanthropist, Sonu Sood. During the coronavirus induced lockdown, Sood helped repatriate millions of stranded Indians both within and outside India. Students in Kyrgyzstan, migrants in India reached their homes amidst the pandemic last year, all thanks to his humanitarian efforts. And now SpiceJet has honoured him by dedicating an aircraft livery for a Boeing 737. Sonu Sood is the first Indian actor to be featured in a livery of a domestic airline. The aircraft has a larger than life picture of Sonu Sood, along with the text “A salute to the saviour Sonu Sood.” Read on to know more.

Private Airline, SpiceJet unveiled a special aircraft dedicated to Sonu Sood, to thank him for his heartfelt philanthropic deeds amid the pandemic. The airline unravelled a special livery with the image of the actor adorned on the Boeing 737 aircraft. Sonu Sood earlier, mortgaged his properties to raise money for the needy, repatriated students stuck in Kyrgyzstan, installed a mobile tower in a remote village in Haryana, apart from helping millions of migrants reach their homes spread all across the country. SpiceJet’s special flight, honouring Sonu Sood, is indeed heartwarming.

The phenomenally-talented @SonuSood has been a messiah to lakhs of Indians during the pandemic, helping them reunite with their loved ones, feed their families and more. (1/3) pic.twitter.com/8wYUml4tdD

The actor informed in a statement,  “To be honest, I am quite taken aback by his huge honour. This is a really sweet and touching gesture on Spice Jet’s part and I am overwhelmed with such a lovely present. I hope that I can keep making everyone proud with my work. I am also thankful to Spice Jet for their effort of bringing back so many Indians from different parts of the world safely to their homeland during the pandemic.” He also shared a few pictures of the aircraft on his Instagram profile.

SpiceJet and Sonu Sood collaborated since the beginning of the pandemic in 2020, to repatriate thousands of students stranded abroad in countries like Russia, Uzbekistan, Manila, Almaty, among others. Chairman and managing director of SpiceJet, Ajay Singh stated “We are extremely proud of our association with Sonu Sood and the work that we have done together during this pandemic. This special livery is a tribute from SpiceJet for Sonu’s selfless efforts and to thank him for the outstanding and exemplary work that he has done to help millions during this pandemic.” Well, hats off to Sonu Sood for truly being the inspiration and saviour that our country needs, during this time of distress. Infact we at Curly Tales also got the opportunity to talk to him. Watch this interview to know more.