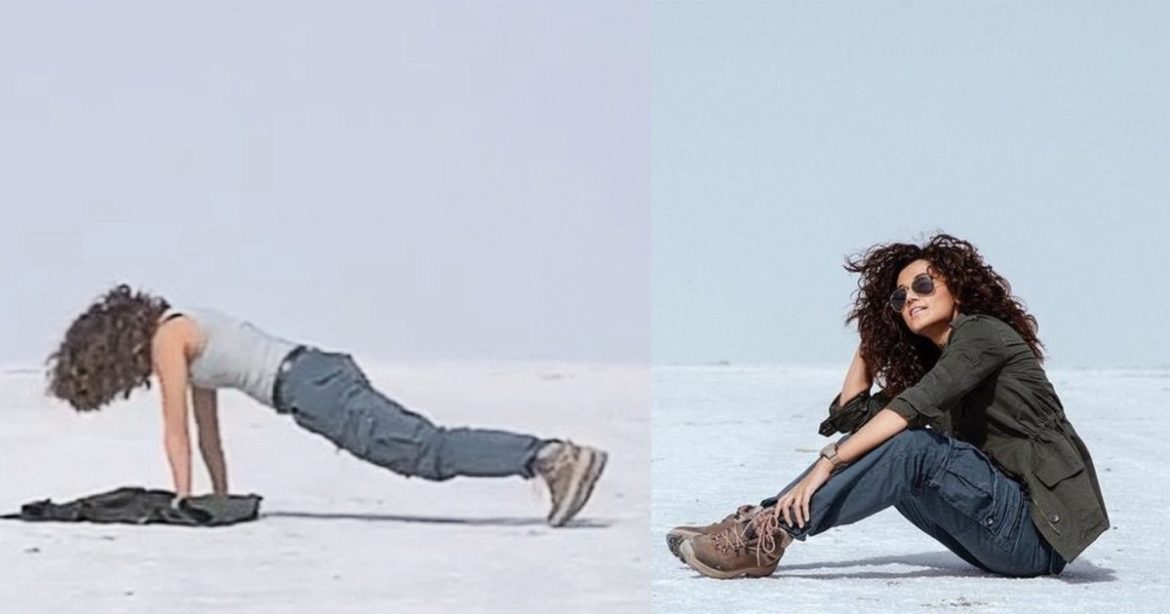 Ever thought of doing push-ups in a desert? Actress Taapsee Pannu did that in the middle of the vast salt mire of Gujarat, the Rann of Kutch. The actress was in the salt desert for the shooting of her film Rashmi Rocket. Her push-up video on the desert has received loads of heart reactions. Apart from the push-up video, the Manmarziyaan actress shared other snaps too from the gorgeous Rann. In one of the pictures, she is travelling inside a camel cart and in another, she is sitting in front of a tent. In one of the pictures, Taapsee is seen running on the white sands with her team members.

Fitness Goals From The Salt Desert

Actress Taapsee Pannu is giving major fitness inspirations from India’s popular white sand desert, the Rann of Kutch. She has posted the push-up video from the desert on her Instagram handle stating, “Step by step process of making a random video in a beautiful location, just coz you have a hidden enthu tourist in you… Figure out a random activity like Push ups… remove the jacket coz you realise it might make it look like you r touching the floor hence taking away the credit of your newly found strength … Couple of push ups later realise that your face is not seen anyway, thanks to the baal ki dukaan on your head…. ”

“Flip the head to make sure they know it’s you (coz it’s kinda regular to post other ppl’s videos on your timeline) … A couple of more push ups later realise this is not going anywhere… Just get up pick up apna boria bistar and chalte bano… And next time find a better activity to do.”, Taapsee continued.

Also Read: Sonakshi Sinha’s Kerala Pics Will Inspire You To Plan A Trip To God’s Own Country

Taapsee Posted Pictures Of The Desert Tent And Camels

Taapsee has posted a picture in front of a desert tent and captioned it as, “When the colours around are as vibrant as the hospitality.” In one of the pictures, she is seen inside a camel cart. Her picture with the camel and her push-up video are from the last day of the shoot of her movie in the location. A few months back, Taapse was on a vacation in the Maldives and had shared some stunning pictures from the island.

Also Read: Sara Ali Khan Indulges In Delicacies &#038; Chills By The Beach During Her Maldives Vacation

Meanwhile, the popular white desert festival of India, the Rann Utsav is taking place in the Rann of Kutch till February 28, 2021. From camping under the starry sky, experiencing the local food and culture, enjoying the camel cart rides to watching the magical full moon over the mirage, there are oodles of convincing reasons to attend the grandiose festival.  For now, you can watch this amazing Sunday Brunch of Kamiya Jani with Taapsee Pannu: