This 25-Year Old Boy Tested…
Baby On The Way? Here’s…
Daleside Manor Boutique Hotel In…
Stay In This Stunning European-Style…

This 25-Year Old Boy Tested Positive For COVID-19 At Base Camp, But Still Conquered Everest 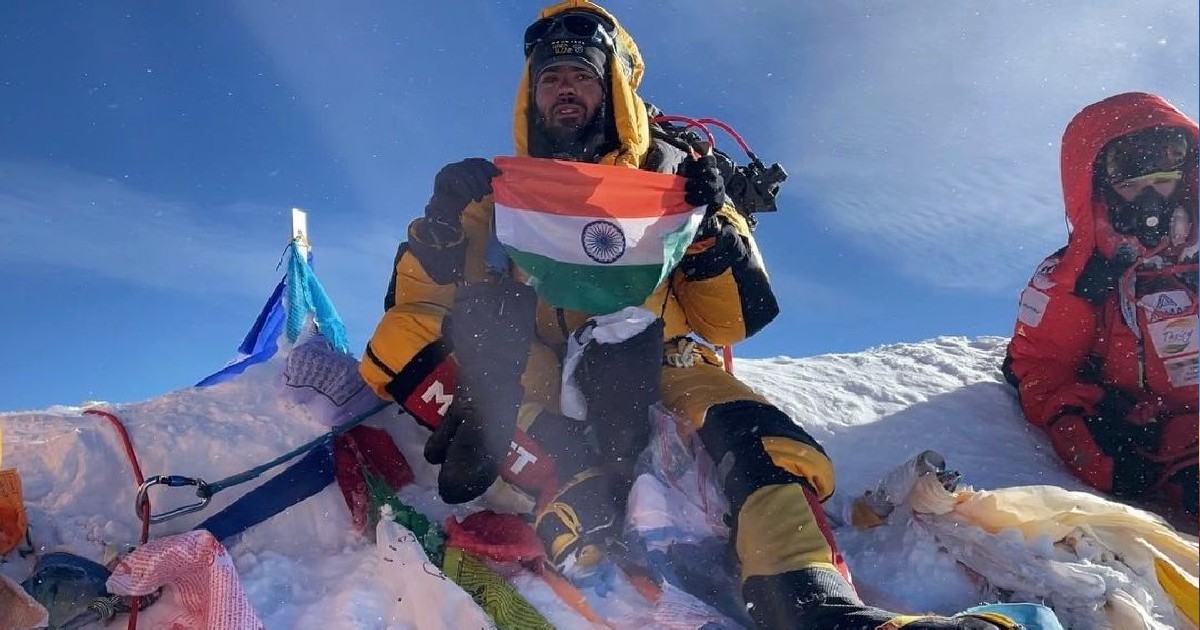 With sheer dedication and a wee bit of luck, nothing is impossible to achieve, proves 25-year-old Mount Everest climber Harshvardhan Joshi, who had no idea about mountaineering 10 years back. But then, his growing interest in the mountains made him complete nine mountaineering courses. After a prolonged period of endurance training, Harshvardhan from Mumbai had finally stepped inside the Everest Base Camp on April 13, 2021. But little did he know that a bigger challenge was waiting for him.

He tested COVID-19 positive in the base camp. But that did not deter his passionate spirit. He got quarantined till he tested negative, and then again continued his journey to finally reach the summit on May 23.

Life At The Everest Base Camp

Everest Base Camp is the place where mountaineers spend around two months to get accustomed to the weather conditions in the higher altitudes. Due to the stone-cold temperatures, many trekkers often catch a cough known as Khumbu cough. The name of the cough has come from the valley in proximity. As Harshvardhan told Conde Nast Traveller, with the COVID scenario in place, it wasn’t easy to differentiate between Khumbu cough and COVID. The camp did not have any COVID facilities either. Then one day, a BBC article reported about cases of the virus from the base camp, which alerted Harshvardhan and his teammates.

A wife of one of his doctor teammates flew to the camp with rapid antigen kits. Five of the team members tested positive and cancelled their trips. Harshvardhan also tested positive, but instead of cancelling his trip, he isolated himself. Luckily, he was asymptomatic. While he was inside the tent, he witnessed unruly winds, harsh weather and even the death of two climbers from another team, who were scaling down from the summit. But nothing took his determination away from him.

Testing Negative After Isolation And Intake Of Vitamins

While inside the camp, he kept communicating with doctors. Some had also advised him to return to Kathmandu. But Harshvardhan thought that returning would not be a good idea for him. So he waited, quarantining himself for nine days. He took vitamin capsules and did daily check-up for breathing. He had also increased his vitamin dosage for faster recovery. The camp had the provision of additional supplemental oxygen and a chopper. On May 18, Harshvardhan finally tested negative for the virus.

Winning The Everest: The Frozen Tears Of Happiness

On the night of May 19, Harshvardhan resumed climbing, along with two Sherpas, to reach the summit. On May 22 night, the trio started approaching the peak from Camp 4. It was a windy night, but they made through the challenge. The next morning, at 6:40 AM, Harshvardhan was finally living his dream. He was at the summit of Mount Everest. Speaking to CN Traveller, he said that when he reached the peak, he felt very emotional. But he couldn’t cry at the height as his tears would freeze.

Harshvardhan had also planned to scale the nearby mountain Lhotse, but had to give up that plan due to unfavourable weather conditions. Nevertheless, his achievement is profoundly awe-inspiring and motivational.