Tirupati Has A Ganesha Idol…
We Took A Hot Air…
Work-From-Vacation Season: 5 Stays To…
5 Hotels In Agra That…

Tirupati Has A Ganesha Idol Made Of Bangles

Ganesha idols displayed all over the country during Ganesh Chaturthi, not only bring about the magnificence of Lord Ganesha but also highlight the immense talent and creativity of the artisans involved. Temple City, Tirupati in Andhra Pradesh has a massive 30 feet Ganesha idol made of bangles. This recyclable eco-friendly Ganesha idol is known as the ‘Mattigaajula Ganesh’ or Bangles Ganesh. 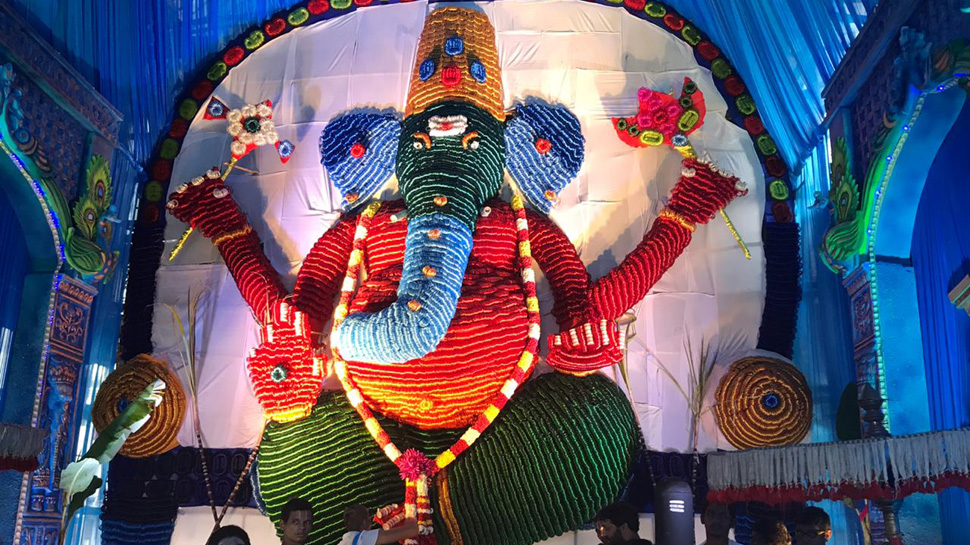 Installed at Thummalagunta district on the outskirts of Tirupati, this Ganesha idol is made of 2 lakh clay bangles. Over 30 artisans from Bangalore and Hyderabad, who worked on the sets of Baahubali, along with local help have tirelessly worked for 15 days to assemble this 30 feet tall Bangles Ganesha. The Bala Vinayaka Committee and Sri Kalyana Venkateswara Swamy Youth Association were the organizations behind this spectacular installation. 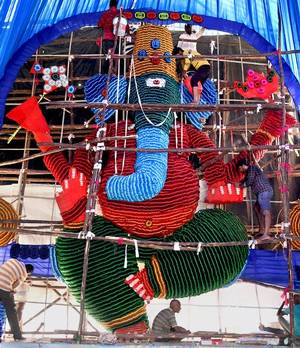 What’s interesting is the Laddoo placed on the palm of Lord Ganesha. This is crafted in the shape of Ganesha himself. The prasad weighs around 1,116 kg and is being prepared by the local confectioners Sharif and Ashraf. It will be distributed among devotees on the ‘Nimajjanam’ day, as published by a reputed news agency.

Also Read: Bangalore Has A 30 Ft Ganesha Idol Made Out Of 9000 Coconuts

That’s not all, the 2 lakh bangles used in the creation of this Ganesha idol will be removed after the festival and distributed to women. The Ganesha Idol in Tirupati is taking on the eco-friendly route in its own spectacular way.  We are just mesmerised by the unique Bangles Ganesha for this year’s Ganesh Chaturthi.