Turkish Chef Cooks Fryums On…
How Noida Rebranded Itself Into…
This Nature-Themed Cafe In Guwahati…
KFC Japan Buffet With Pizza,… 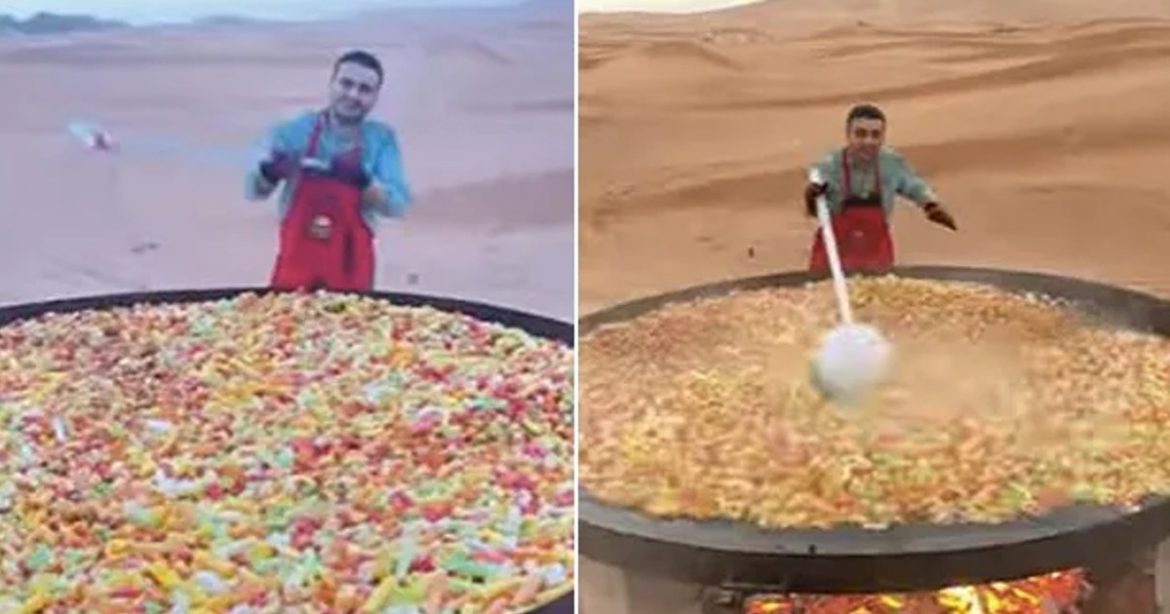 Burak Özdemir, nicknamed CZN Burak, a Turkish chef and restaurateur owns the Hatay Civilizations Table chain of restaurants, which consists of four branches: Taksim, Aksaray, Etiler and a first overseas branch in Dubai. Recently , this popular and talented chef made headlines for something unbelievable: making fryums in a huge- no, really, really huuuge skillet in the middle of the Emirati desert!

If there’s one thing that the internet really enjoys watching, it has got to be videos of extraordinary things. These larger-than-life stunts amaze users with their sheer magnitude or numbers involved. The fascinating video has gone viral on Instagram.

The video was shared on Instagram reels by the chef, who’s handle goes by @cznburak, who has over 29.4 million followers. The extraordinary feat by chef Burak garnered over 98 million views and 5.4 million likes since the time it was shared.

Cooking In Style Right In The Middle Of Desert

In the short reel, we could see the Turkish chef set up a huge skillet in the middle of the Dubai desert. After arranging the wood under, he turned on the massive skillet and  poured a lot- a lot, lot of oil. Soon, the fryums puffed up in an instant, lending a mesmerising air to the entire preparation. Within seconds the colourful fryums were ready to dig into – right in the middle of the desert!

Apart from making fryums in the middle of the desert, chef Burak had recreated Dubai’s high-rise Burj Khalifa out of butternut squash with a sumptuous glaze on top. Before this, a chef from Lebanon whipped up the largest serving of hummus of more than 10,000 kilograms. The Guinness Book of World Records (GWR) had recognized this amazing feat on the occasion of World Hummus Day.