A First Of Its Kind…
Kerala Temple Visited By ‘Vegetarian’…
Dubai To Send Back Pakistani,…
Saif Ali Khan Always Owned…

A First Of Its Kind Footbridge Opens In Dubai Marina 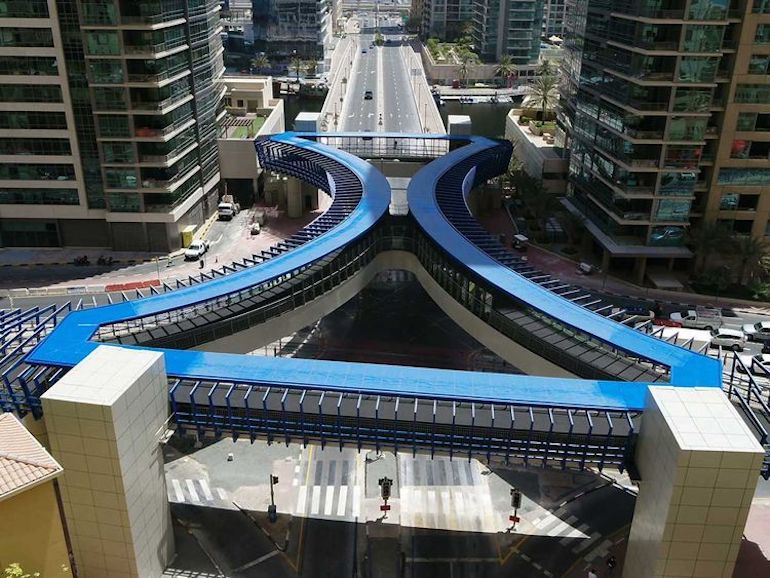 Dubai welcomes one-of-its-kind a brand-new four-way pedestrian footbridge. Dubai’s Roads and Transport Authority (RTA) opened this new bridge on Saturday, September 19. The four-way bridge is said to be the first of its kind in Dubai. It can accommodate 8,000 people per hour, in all directions. Citizens can now use this cool bridge, which is located at the intersection of King Abdullah Bin Abdulaziz Al Saud Street and Al Gharbi Street and close to Dubai’s JBR. The bridge has four escalators linking the four sides of the junction.

Also read: FlyDubai To Resume Flights Four Times A Week To the Maldives From October 29

Flaunting a unique design, the bridge stretches to 75 metres. It displays the metropolitan architecture of the Dubai Marina neighbourhood and its surrounding coastal area. In terms of building this new bridge, Dubai’s RTA plans to construct as many as 36 footbridges from 2021 to 2026. After the construction of these bridges, Dubai will boast a total number of pedestrian-friendly bridges to 165. 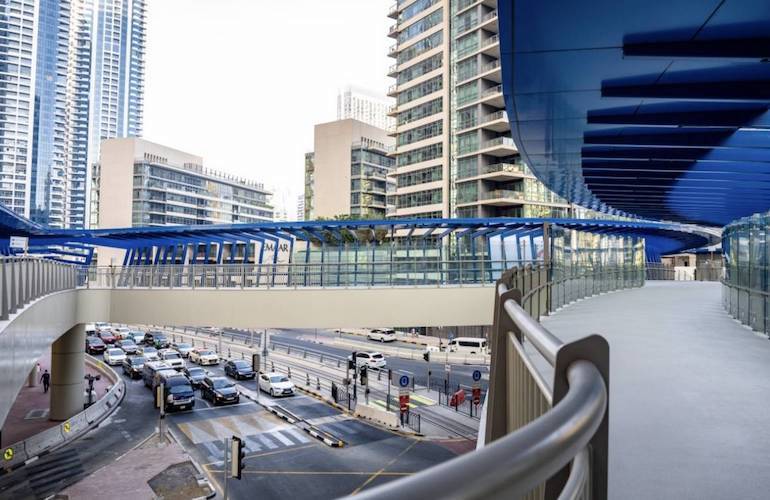 Some Of The Footbridges In Dubai Are Bicycle-Friendly. They Have Racks And Cycling Lanes

To make the rich city of Dubai, bicycle-friendly, some footbridges have bike racks and cycling lanes. All this happened under the directives of His Highness Sheikh Hamdan bin Mohammed bin Rashid Al Maktoum, Dubai Crown Prince and Chairman of the Executive Council. The bridge also aims to improve traffic safety.

On this, spokesperson of Al Tayer group said,

“The construction of pedestrian bridges in Dubai is a manifestation of the vision of His Highness Sheikh Mohammed bin Rashid Al Maktoum, Vice-President, Prime Minister of the UAE and Ruler of Dubai. It aims to bring happiness to people. And also to move to a sustainable transport model characterised by minimal pollution to the environment.”