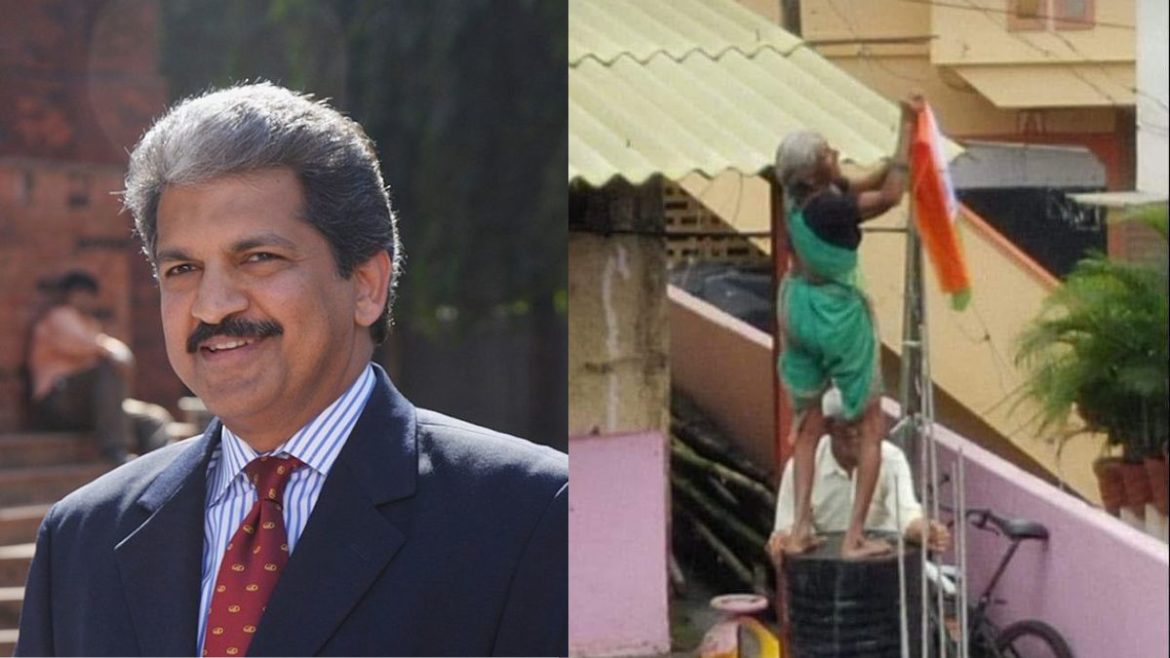 India celebrated its 75 years of independence beautifully with the government’s ‘Har Ghar Tiranga’ campaign on Monday. PM Modi asked the Indian citizens to celebrate the grand 76th Independence day and hoist the national flag in their houses and support this initiative. The entire country observed the honourable ‘Azadi Ka Amrit Mahotsav’ to commemorate 75 years of independence. Indians brightened up their houses and neighbourhoods by hoisting the Tiranga. Anand Mahindra shared a sneak peek of the celebrations of an elderly couple.

Tiranga flying high on every house’s rooftop shows how Indians celebrated Azadi Ka Amrit Mahotsav. The business tycoon Anand Mahindra shared a photo on his official Twitter account showing the celebration of Independence day by an elderly couple. The photo shows how much effort the couple is putting to hoist the Tiranga. The husband is seen clinching a huge tank and his wife is standing on it to fix the flag on a rod. Also, the picture has a stool beside the tank, and the woman probably used it to stand at the top of the drum. The couple trying so hard to hoist the Tiranga is getting shared extensively on various social media platforms. Anand Mahindra posted the beautiful picture captioning, ‘If you ever were wondering why such a fuss over Independence Day, just ask these two people. They will explain it better than any lecture can. Jai Hind.’ Check out the picture here.

If you ever were wondering why such a fuss over Independence Day, just ask these two people. They will explain it better than any lecture can. Jai Hind. 🇮🇳 pic.twitter.com/t6Loy9vjkQ

Anand Mahindra shared a beautiful message with the caption of his post. If anyone feels why people make a deal about celebrating Independence day, the elderly couple is the people to answer this question. He wrote that these people can explain the importance of this day better than any lecture.

The Picture Of The Elderly Couple Hoisting The Tiranga Went Viral

Anand Mahindra is known for sharing gem-like stories and moments with the netizens using his social media presence. And this time too, his shared picture stole our hearts. Netizens are loving to see how much extent this couple went to celebrate the glorious 75 years of India’s independence. This heartwarming photo shows the value of Independence day for this couple.

The picture surely touched a chord with Indians. It has over 144k likes and the comments and retweets are so heartwarming with photos and videos of people hoisting the national flag in their houses.