We’ve already told you about the weirdest food combinations like Kaju Katli Chicken soup and Ferrero Rocher Manchurian. If you’re already irked by these, here’s another bizarre dish that can add fuel to the fire. It’s chilli jalebis soaked in soya sauce, guys! Experimenting with food is something that has been happening for ages. But now, it’s reaching such a height that it’s straightway getting us startled. What’s more, another peep just picked up our favourite jalebis, and added curd, sev, chopped onion and papdi to them. The internet went so wacko over this combination that someone just ended up commenting ‘Blocking you’.

A Twitter user named Mayur Sejpal made Jalebi Chaat by taking three jalebis and topping them with curd, sev, chopped onion and papdi. The picture highly angered the foodies on the internet and the comments on the picture are the proof. Under the picture, someone commented, “Find some new hobby .. I love food .. Don’t do this..” Another stated sarcastically, “Is ke upar…fresh fruits daal do…” Another wrote, “Mein Mayurbhai par online harassment ka case kardunga”.

Chilli Jalebis Dunked In Soya Sauce Is A Food Trend Too

Jalebis are the most loved desserts of many people. The very thought of the coil-shaped crispy, syrupy sweets infused with ghee can get our hunger pangs high. But then imagine, one can fine day, you’re happily enjoying your jalebi and someone just comes and puts soya sauce, garlic and bell peppers over it?

What would be your reaction then? Well, someone just did it and even presented it on a plate. What’s more, the picture was uploaded on the internet and no wonder, it has freaked out the foodies already. Oh, we just forgot to remind you about the ice-cream vada pav! 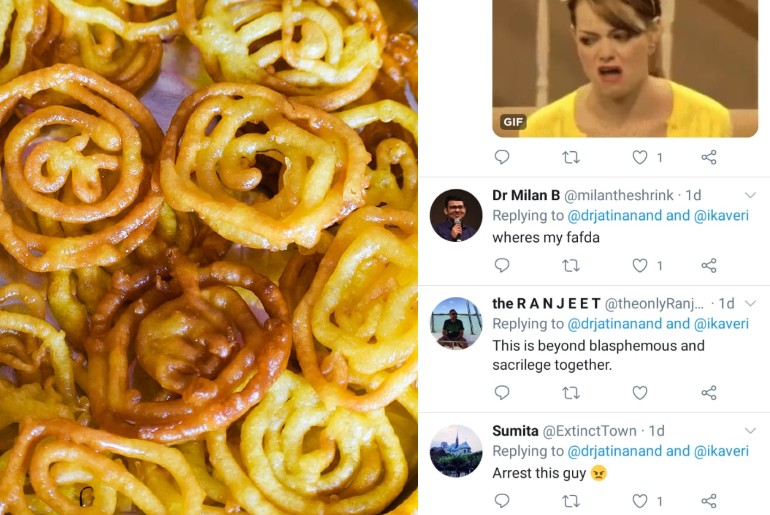 The picture of the chilli jalebi is as hilarious as it can be. On top of that, it is captioned as, “Chilli Jalebi, frands… Best served with soya sauce!” Someone commented, “Arrest this guy”, followed by an angry emoji. Another wrote, “This is beyond blasphemous and sacrilege together.” Another exclaimed, “Eesh. Ugggh!” Would you dare to taste this outlandish jalebi varient? Let us know your thoughts in the comments section below. Meanwhile, Team Curly tales had also taken up a weird food combination challenge. Two of our friends took part in the game by choosing random chits and mixing whatever comes up in the chit. Watch the video to see the funny results: