Every Mumbaikar’s eyes just light up at the thought of Vada Pav. Spicy potato vada stuffed in soft pav, filed with spicy and tangy chutney, is an explosion of flavours. But when it comes to weird food combinations, did you really think they’d spare the humble Vada Pav? The year 2020 is truly the year of food fusions. From top chefs to street vendors everyone’s innovating with something new. Food combinations like Gulab Jamun pancake, Peanut Butter Pickle, Ice Cream Dosa to Noodle Pani Puri laced this year with bizarre culinary adventures. Now the latest to join this fad is the Ice Cream Vada Pav. A vendor from Gujarat replaced the vada with a scoop of ice cream and tucked it in between the pav. Read on to know more. 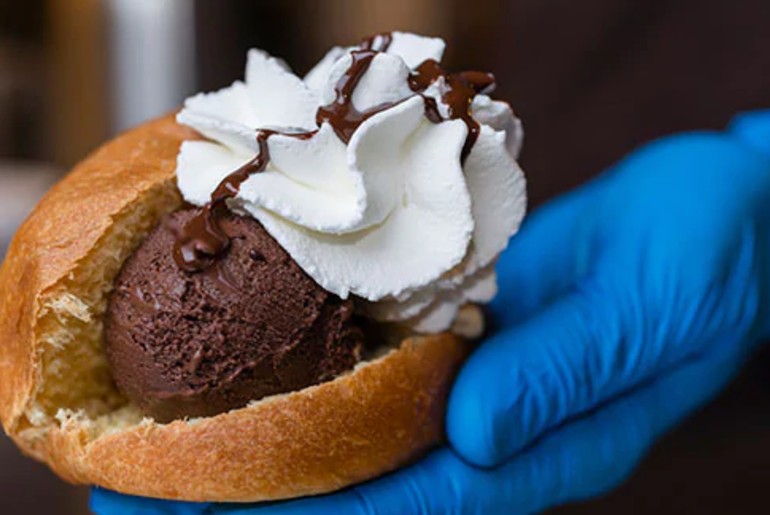 The iconic Mumbai street food of Vada Pav has been given a sweet twist. A vendor from Gujarat started selling Ice Cream Vada Pav. And the internet is buzzing with divided opinions on this sweet twist given to the popular savoury snack.
A recent addition to this lot is a Gujarat vendor, who is selling Ice Cream Vada Pav. Sahil Adhikaari first posted the video on Twitter, which went viral.

In the video, the Gujarati vendor first pours multiple sugary syrups inside the pav. He then stuffs it with a scoop of ice cream instead of the usual spicy aloo patty. The vendor then garnishes the dish with colourful tutti-fruiti before serving it to the customer. The tweet read, “Gujarat’s answer to Vada Pav is here. Vada Pav in mud”. The video shared by the Twitterati social media amazed netizens. Some people appreciated this inventive idea. And others were left shell shocked. The video garnered over 37.1k views along with loads of retweets and comments. Well, Vada Pav touted as one of the best burgers in the world, now got a sweet spin. What do you think, are you in on the Ice Cream Vada Pav?