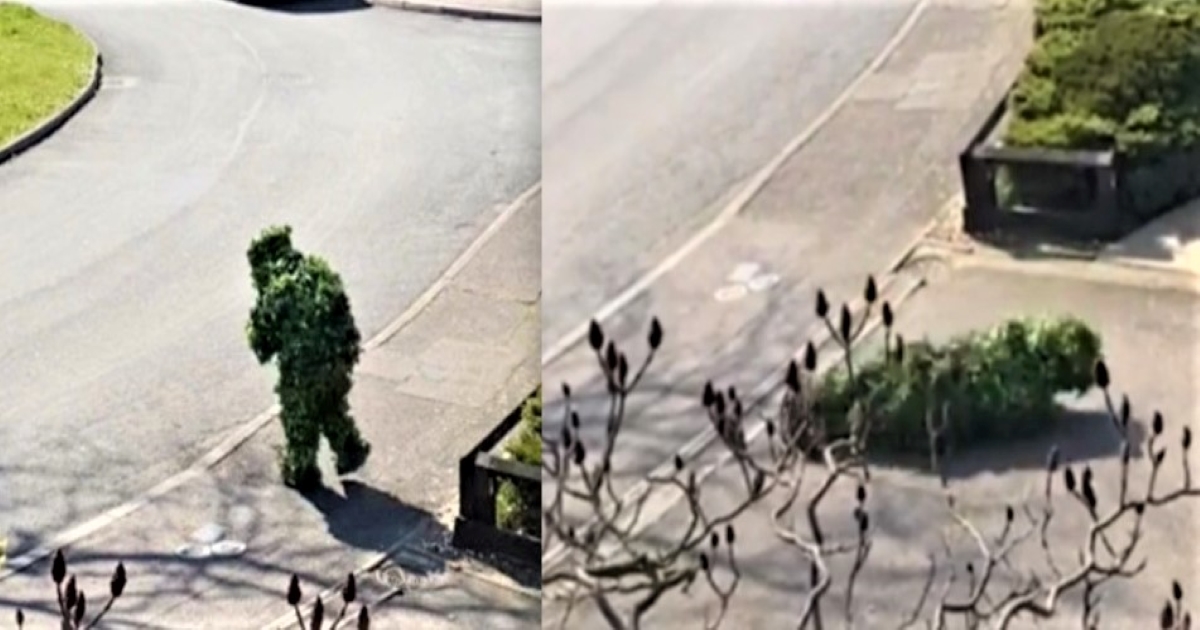 How would you react if you look out of the window some day and spot a walking tree? Would you freak out? Or would you get super excited? Well, weird things like these are happening for real as people are going crazy being locked up at their homes. A man in England recently dressed up as a bush to venture out to the streets amid the countrywide lockdown.

The incident took place in Stevenage, Hertfordshire, England. The man first hid behind a bush, then hid behind another bush, then crossed the road, crawled, rolled on the ground, ran, fell down intentionally, and did what not! The residents around the spot literally had a hilarious show. A young couple, Nicholas Murray and Madeline Mai-Davies, captured the bushy breakout in a video and shared it on Tiktok. The video received more than 700,000 views on the app. In the clip, the man is wandering covered in foliage from head-to-toe and Madeline is uttering in an amused voice, “reached new extremes of how to sneak out”.

We had found references of trees walking in fictional novels and stories often, like in Shakespeare’s Macbeth, where the Birnam forest started moving towards Scotland’s Dunsinane Hill. But this in reality? Nobody would have imagined for sure. The man comes back with an orangish packet at the end of the video. Maybe, he had gone to a store to pick up some groceries, or something related. But his shrubby trick made him viral all over social media. It garnered mixed reactions from the viewers. Someone commented that he is ‘a PUBG player‘, and another man wrote that he can become ‘a good detective‘. Another person, being concerned about the current situation asked why the act is being filmed. When people all around the world have been advised to stay indoors to curb the spread of coronavirus, some are looking for creative ways to get their purposes sorted. And this prankster neighbour in England simply reached his heights. Another weird incident happened some days back in India. A man in Jammu-Kashmir had faked death with the intention of reaching home. Another man in France tried crossing mountains for cheap cigarettes. The quarantine mode has seriously played with the nerves of these people, making them extremely creative!