Indian Restaurant Vandalised In The USA With Racist Graffiti

An Indian restaurant in Sante Fe city in the USA was vandalised on June 22.  The Sikh-owned restaurant named ‘‘India Palace restaurant’ witnessed vandals break into the place and paint racist graffiti on the walls.  According to the local, Santa Fe Reporter newspaper the vandals caused damages worth $100,000 (₹75.6 lakhs). The police and the FBI are currently investigating this vandalisation. On the same day June 22, President Trump freezer H1-B visas and other work visas prohibiting immigrants to visit the USA for jobs until the end of the year. 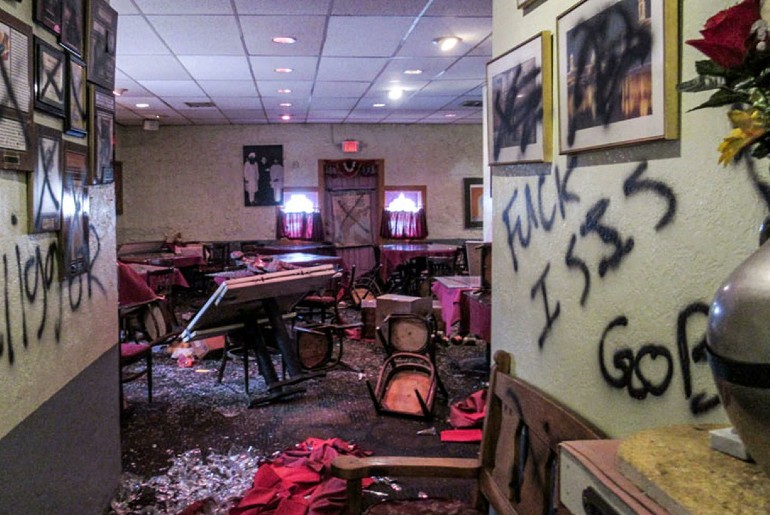 The Sikh-owned restaurant ‘India Palace’ situated in Santa Fe city, in New Mexico, in the US, faced vandalization by a white supremacist group. The vandals left slogans like “white power,” “Trump 2020”, “F**K ISIS,” and “go home”  on the walls of the restaurant. Recently, a temple in Delaware installed a 25-feet tall Hanuman statue which is the tallest statue of a Hindu deity.

It just breaks your heart. Immigrants come with dreams in their hearts. They work so hard. And this is how they're treated. It's just not right. pic.twitter.com/VgJrUjC2T3

Reportedly the vandals destroyed the front desk area, damaged the kitchen and overturned tables. The police also found piles of broked glassware across the restaurant. The vandals emptied wine racks. They also beheaded a statue of a goddess in the restaurant. Apart from this, they took away the restaurant’s computers.

Also Read: 20 Days In New York And 3 Incidents Of Racism, The Big Apple Is No Longer My Favourite City

Restaurant owner, Baljit Singh states to the local Santa Fe Reporter “I walked into the kitchen, I saw everything and I was like, hold on, what? What is going on here?” He also reveals that the restaurant suffers damages worth $100,000 (Rs.75.6 lakh). The restaurant remained closed for weeks due to the COVID-19 restrictions. Baljit Singh recently reopened the restaurant. 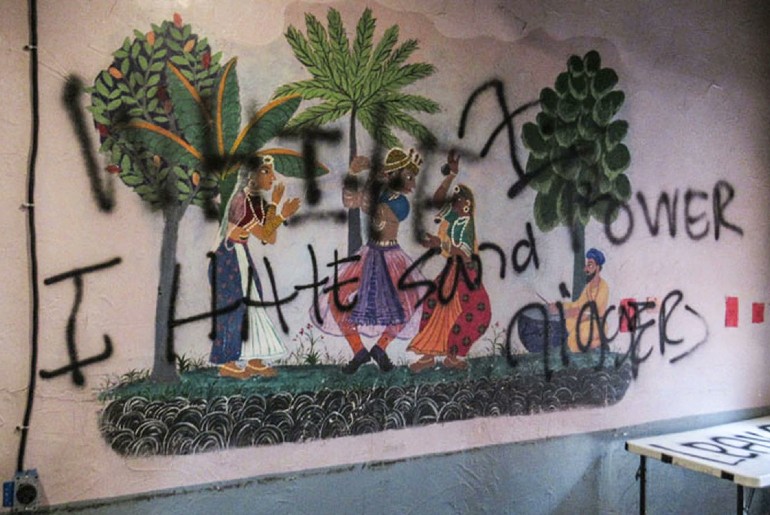 A Case Of Mistaken Identity

Vandals painted racist graffiti on the walls of the ‘Indian Palace’ restaurant. And some of that graffiti was against the terrorist organization Islamic State In Iraq and Syria (ISIS). So this suggests that the vandalisation in the Sikh-restaurant could have been a case of mistaken identity. Due to their turbans, people in the USA often mistake Sikhs for Islamists or Iranians in the USA. On April 29, Lakhwant Singh faced a brutal attack in Colorado. Many such incidents took place after the 9/11 terror attack in the USA. However in Canada, Punjabi is the third official language in the parliament.

The Sikh-Owned Restaurant Received Heartfelt Support From The Community

Governor Michelle Lujan Grisham issued a statement on Twitter condemning the incident. In the tweet, she states, “We will not stand for such hatred in New Mexico.” She adds that they spoke to the restaurant owner, Baljit Singh and informed him that their community supports him during this unfortunate time.

I am absolutely heartbroken and disgusted by this racist attack. I spoke to Mr. Singh this morning and let him know that our community is with him. We will not stand for such hatred in New Mexico.https://t.co/GXafrZcGW7

Mayor Alan Webber addressed the crime as “sickening and appalling”. He assured people that they will take strict actions against the culprits.  He states “The Singhs are a long-standing Sikh family that has used its resources to feed homeless Santa Feans through the goodness of their hearts.” The mayor adds “For them to be attacked this way breaks our hearts.” Currently, people started multiple fundraiser campaigns to help the restaurant get back on its feet.