The USA installed its tallest Lord Hanuman statue in Hockessin, Delaware. The 25-feet tall statue made in Telangana’s Warangal got shipped to the USA in January. This is the tallest statue of a Hindu deity in the USA. And it’s the second tallest religious statue in the country after Our Lady Queen of Peace statue at Holy Spirit Church in New Castle. More than 12 artisans from Warangal carved this statue from a single block of black granite. It costs $1,00,000 ( ₹76,17,250) and weighs 45,000 kg. 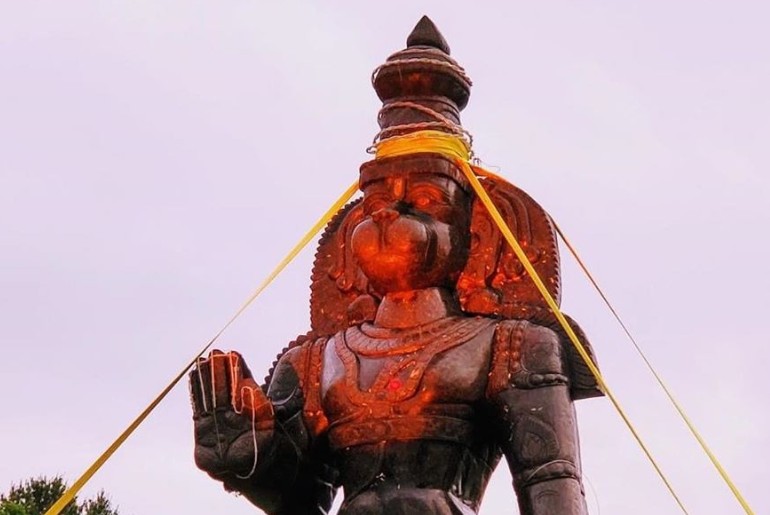 Lord Hanuman Statue Shipped From Warangal To The USA

In January, the 25 feet tall Lord Hanuman statue travelled from Warangal to New York by ship. And from there they transported it in a flatbed truck to Delaware, to the state’s largest Hindu temple. Patibanda Sharma the President of the Hindu Temple Of Delaware Association quotes to Delaware Public Media “Once the statue is made according to a prescribed process by an artisan and is delivered to the temple, the temple priests normally conduct a 10 day, a 5 to 10-day rituals, mostly involving fire offerings and other rituals. And also the community is invited to bond with the statue.” 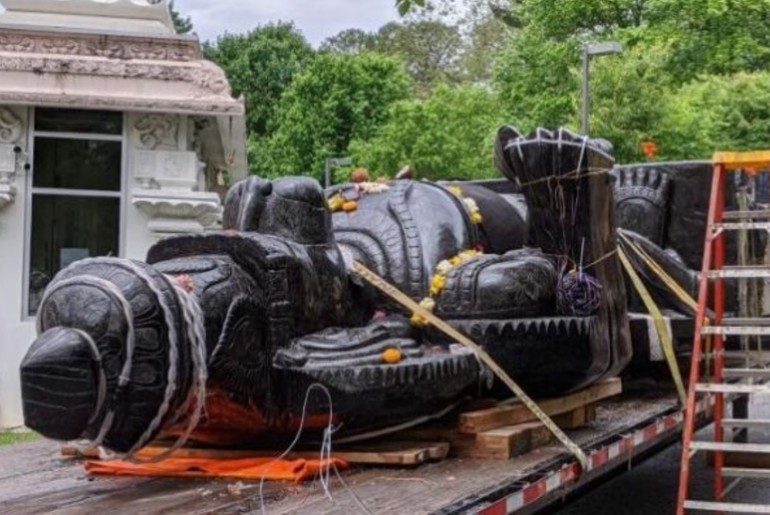 Also Read: Did You Know The Prambanan Temple Is The Largest Hindu Temple Site In Indonesia With 240 Temples?

Sharma reveals that the Lord Hanuman statue weighs 45 tonnes (45,000 kg). She adds that Telangana’s Warangal shipped the statue to Delaware, where it’s now installed. In fact, the statue costs an amount exceeding $1,00,000 ( ₹76,17,250). This includes the amount spent for its construction and its shipping from Telangana to the USA. Artisans or Shilpils who specialized in the skill chiselled this statue from single granite rock. And it took more than 12 of them working full time for more than a year to carve out this magnificent statue. India has the world’s tallest statue, the Statue of Unity in Gujarat.

Named “The Hanuman Project” more than 300 families, temple devotees participated in the 10-day long Sthapana.  Nagraj Bhattar, a priest from Bangalore purified the 25-feet Lord Hanuman statue after it arrived to the USA. Heis part of the Hindu Temple of Delaware. He performed several rituals including purification of the deity with water, rice grains, and flowers beds. Nagraj Bhattar quotes to ANI “We all believe that with the moorty coming to Delaware, Lord Hanuman will bring all the good things like he bought the Sanjeevani. So that was the main central focus for all devotees and the priest.” During this time of coronavirus, a Muslim man installed a contactless bell in a temple in Madhya Pradesh.

This Lord Hanuman statue is now the tallest Hindu deity statue in the USA. American Senator Chris Coons, Lt Governor of Delaware Bethany Hall-Long and New Castle County executive Matt Myer extended their support to the Indian community after the installation of the Lord Hanuman statue in Hockessin, Delaware. Just like in the USA, Brampton in Canada has a large Indian community and it’s called the ‘Mini Punjab of London’.

Travellers Can Now Enjoy Staying In Thailand For...

Noida To Get Two New Parks By Month...

Kaas Plateau In Satara Looks Gorgeous As It...