Las Vegas’ McCarran International Airport is rather popular in the travel circuit for its vending machines, where one can get almost everything, from Legos to cupcakes to toiletries, and much more. But in this new age of the coronavirus, where carrying personal protective equipment (PPE), including gloves, face masks, wipes, and hand sanitizers, has become the norm, the Las Vegas airport has intelligently installed vending machines for the same!

According to a Times Of India report, the move by the Las Vegas airport has come in view of the changing travel scenario, where carrying such essentials has become a norm.

A new option to help protect yourself and others while traveling. LAS was the first airport to install PPE vending machines from which travelers can purchase items like gloves and hand sanitizer. These machines can be found in T1 ticketing and near the T3 TSA checkpoint. pic.twitter.com/1suaVel412

As per Airport spokesperson Christine Crews, the airport is trying to learn and adapt to this new behavior, which is very essential in the airport environment. As people too are slowly trying to adjust to this new normal, the vending machine seeks to be a handy source for those who show up at the airport forgetting one of these essential items.

As per Crews, the airport is reportedly the first airport in the country to install such vending machines. The PPE vending machines are located in McCarran’s Terminal 1 ticketing area and at the TSA checkpoint in Terminal 3. The items in the vending machine include hand sanitizers, wipes, gloves as well as disposable and reusable masks, which will be available at airport prices. 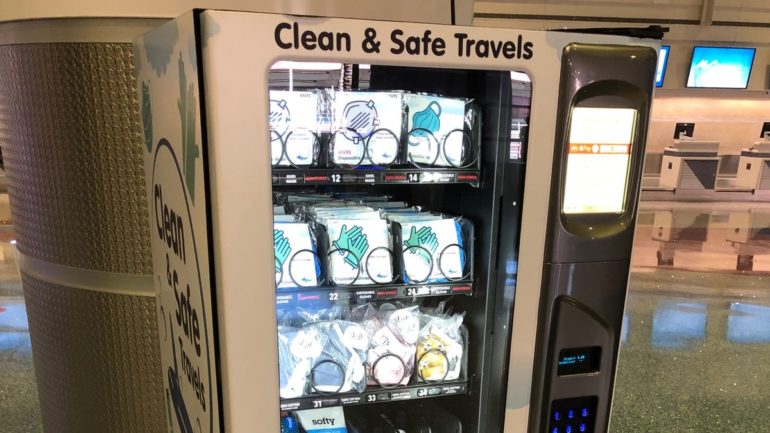 Also Read: The World’s Second Oldest Airline ‘Avianca’ Has Filed For Bankruptcy Due To COVID-19

McCarran Airport Has Doubled Up On Its Cleaning Protocols

The airport has also announced that it is doubling up on cleaning and sanitizing practices throughout the terminals, and is focusing on high-touch areas. However, it has not announced cleaning protocols for the machines themselves.

According to Forbes, McCarran is USA’s 10th busiest airport. Compared to March 2019, the airport has recorded a 2.3 million passenger drop in the same month this year due to the coronavirus pandemic, which translates to a whopping 53 percent decrease in passengers.

As most major U.S. airlines begin to mandate face masks and coverings for passengers, the move by the airport is a rather smart one!