Goa reminds us of pristine beaches, golden sands, sundowners, colourful shacks, coconut trees and more. But a visit to Goa remains incomplete without visiting its churches. The beach state is home to some of the most stunning churches, chapels and cathedrals in India, many of which were built centuries ago. Here are 6 most spectacular churches you must explore when you’re in Goa:

Having an architecture in the marvellous Baroque style, the Basilica of Bom Jesus is a beauty in itself. The construction of the brick red Old Goa church dates back to the 16th century. The church has mortal remains of St. Francis Xavier. It a UNESCO World Heritage Site and is one of the Seven Wonders of Portuguese Origin in the world.  Also, you must try out these 7 local drinks in Goa. 2. Church of St. Francis of Assisi

Built by the Portuguese in 1661, the Roman Catholic church sits in Velha Goa. The architecture of the church comprises a beautiful blend of Tuscan, Baroque and Corinthian styles. The church was built alongside a convent. The convent is now home to a museum which the Archaeological Survey of India had set up in the year 1964. 3. Church of Our Lady of The Immaculate Conception

Nestled in Panjim, this is one of the most popular churches in Goa. It has been the popular filming location of many Bollywood movies like Josh and Dilwale. The construction of its chapel was completed in 1541. The church was completed in 1609. The church gets gorgeously illuminated every year on December 8, during the Festival of Our Lady of the Immaculate Conception. 4. Church Of Lady Of Rosary

The round towers of this church with cupolas differentiate it from other churches. It is considered as one of Old Goa’s oldest preserved buildings. The construction of this Catholic church took place from 1544 to 1547. The ‘Golden Bell’ inside Se Cathedral is the largest bell in Goa. Spread over a large area, the church also incorporates striking wood and gilded carvings. The construction of the cathedral was completed in 1619. This marvellous church building overlooks a vast water body and is located in Penha De Franca town of Bardez, Goa. The town has derived its name from the church. The church sits near the confluence of Mandovi and Mapusa rivers with the splendid Chorao island on one side. 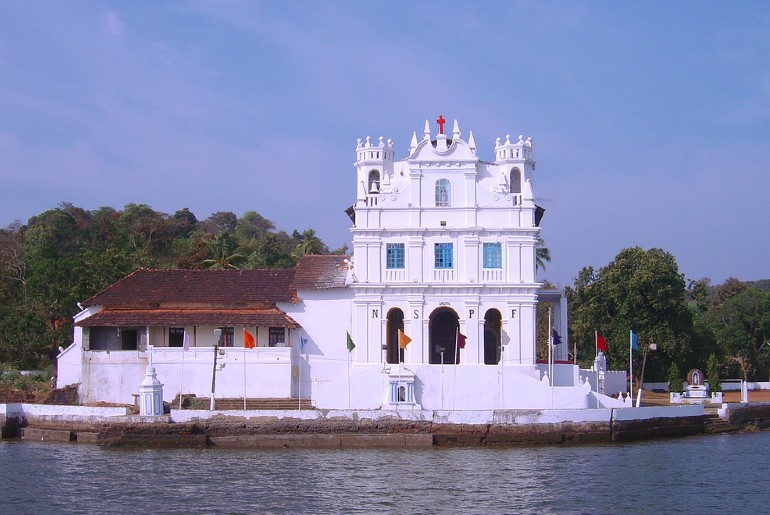 Also Read: This Villa In Goa Has A Luxury Yacht, A Waterfall & An Infinity Pool To Have You Daydreaming

The picturesque and serene environs of these churches will profoundly rejuvenate your soul. Other noteworthy churches in Goa include Church of St. Cajetan, Mae De Deus Church,  St. Diogo’s Church, Church of the Cross of Miracles and St. Clara’s Church, among others. Meanwhile, here’s a virtual tour of Goa from the comfort of your couch: