5 Mysterious Places In India That Defy Gravity And Leave You Awestruck! 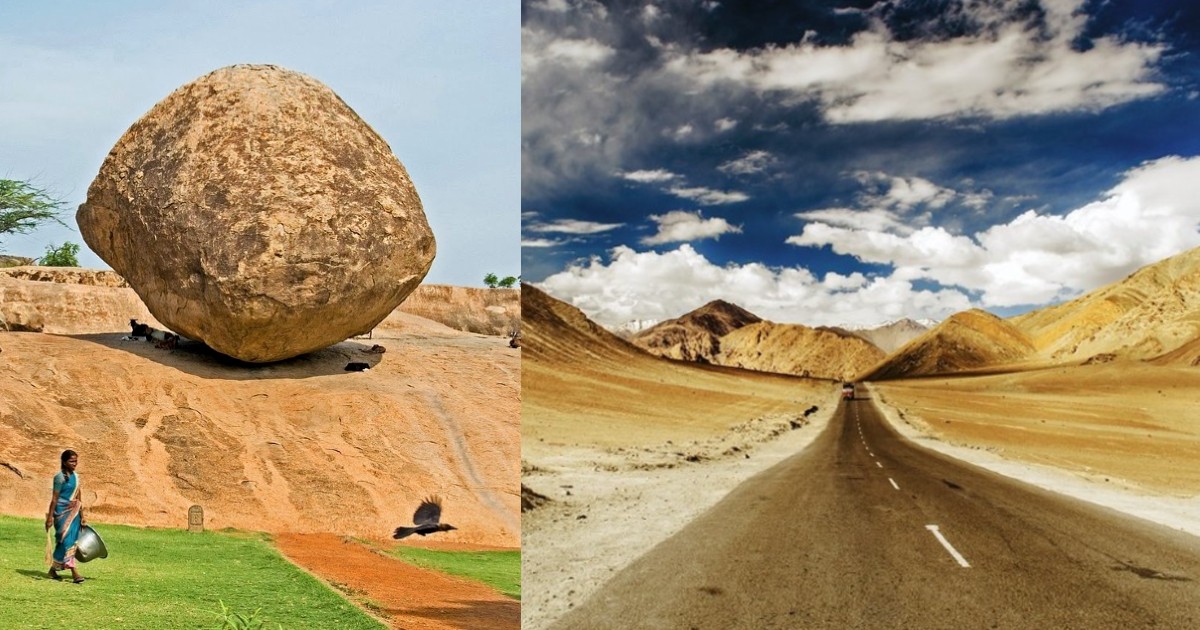 There are mysterious places in India that hold centuries worth of secrets, history and even treasures. But did you know that there are some strange places all across India where the earth’s gravitation force doesn’t seem to work? Yes, this definitely sounds unbelievable, and you’d have to see it to believe it. So, here are 5 mysterious places in India that defy gravity.

Gujarat has a 3000-year-old temple called Tulsishyam which is believed to be the place where Lord Krishna killed the demon, Kul. The road leading up to the temple showcases a Gravity Hill phenomenon. Often vehicles parked close to the hill, tend to roll upwards if the hand brakes aren’t applied. Therefore it might make you believe that the road going downwards is actually going upwards. The locals in the area believe there is a supernatural phenomenon in that area, and the Tulsishyam Road leads people to heaven, as there is a feeling of being pulled upwards. 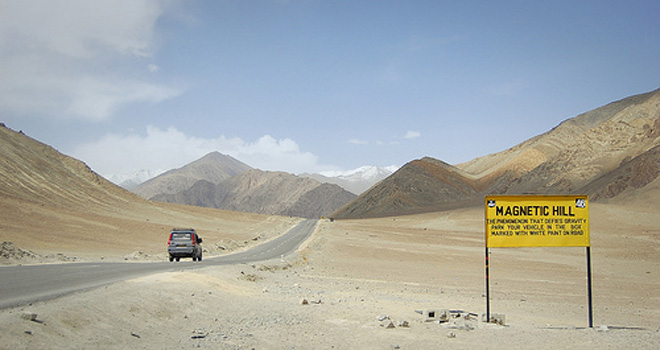 Naneghat nestled in the Western Ghats of Maharashtra is a cryptic mountain where a waterfall miraculously flows in the opposite direction. The strong force of the wins push the water upwards and hence the cascading gravity defying waterfall, that grabs eyeballs. The trekking route of Naneghat was used as a trade route centuries ago, maybe during the reign of Chhatrapati Shivaji. Apart from the waterfalls, there are ancient caves and rock-cut pots that enthral visitors to the area. 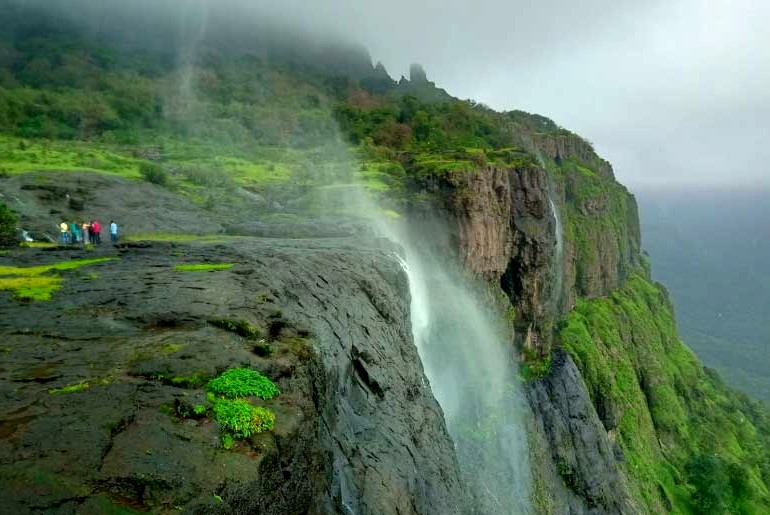 Andhra Pradesh’s famed Lepakshi Temple is an engineering marvel. It has 70 pillars, out of which one hangs mid-air from the ceiling, The base of the pillar hardly touches the ground. Tourists often pass objects like a dupatta or thin sheet of pair underneath the gravity-defying pillar. Passing objects under the pillar is believed to bring prosperity into one’s life. There are others who also believe that the entire temple complex is supported by this one pillar. Legends reveal that the pillar got dislodged after a British engineer tried to move it in an unsuccessful attempt to unravel the secrets of its support. 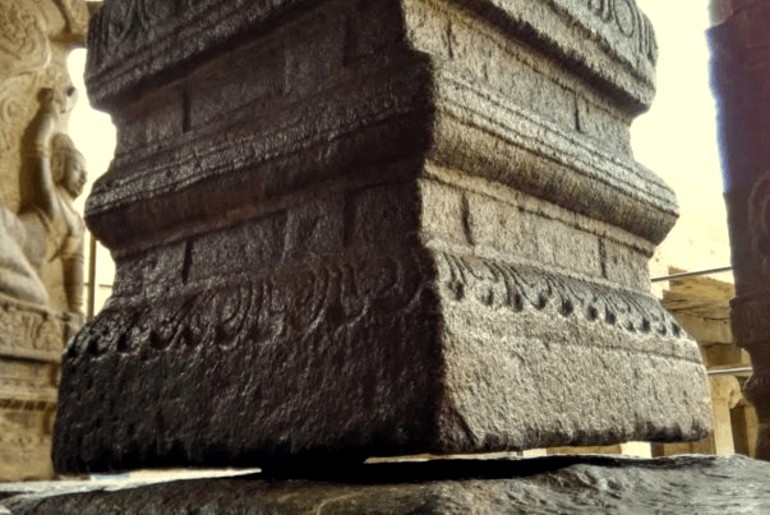 Ladakh’s Magnetic Hill is nestled on the Leh-Kargil-Baltik national highway. This Cyclop hill is believed to pull cars uphill. While the hill road is actually a downhill road, cars and objects passing on it appear to roll uphill in defiance of gravity. Some people even say that aeroplanes passing by this place have to increase their altitude. More often than not vehicles put on neutral with engines turned off, slowly start moving upwards on their own. This optical illusion is created due to the area’s layout. It’s certainly a magical sight to behold. 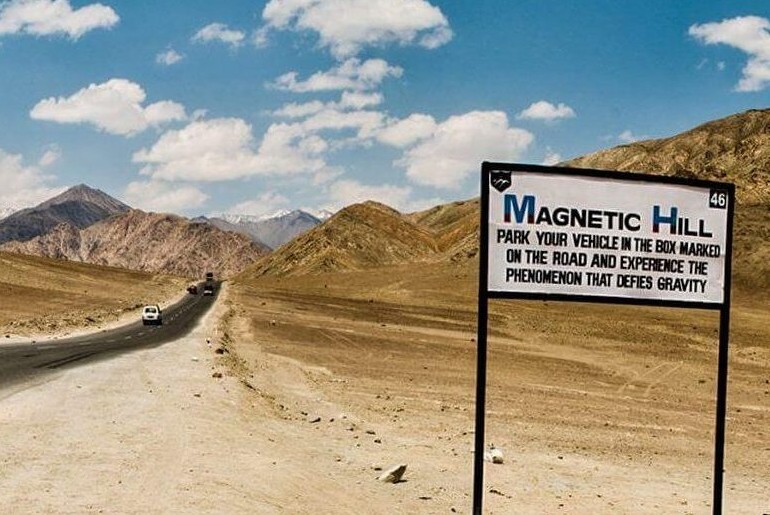 In the historic town of Mahabalipuram, tourists flock in large number to witness a huge round boulder nestled on a steep rock slope that refuses to give in to gravity. Vaan Irai Kal, popularly called ‘Krishna’s Butter Ball’ is a 250-ton rock around 5m in diameter that rests on a 45-degree angle on a steep slippery area. This mysterious rock refuses to roll down the hill despite tourists trying to push it down or the force of gravity doing its duty. The rock is believed to come from heaven and should not be touched. Infact, it’s said that Governer of Madras, Arthur Lawley used seven elephants to move the rock and couldn’t even move it by an inch. 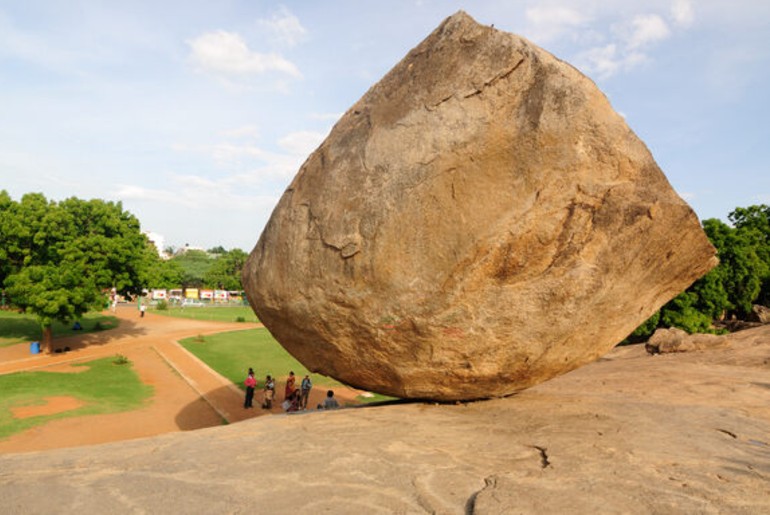 So, folks, these are some of the mysterious places in India that defies the laws of gravity. A downhill road that takes vehicles upwards,a temple with a floating pillar, a reverse-flowing waterfall and a rock that doesn’t roll downhill- India is indeed a treasure trove of mysterious historical gems.